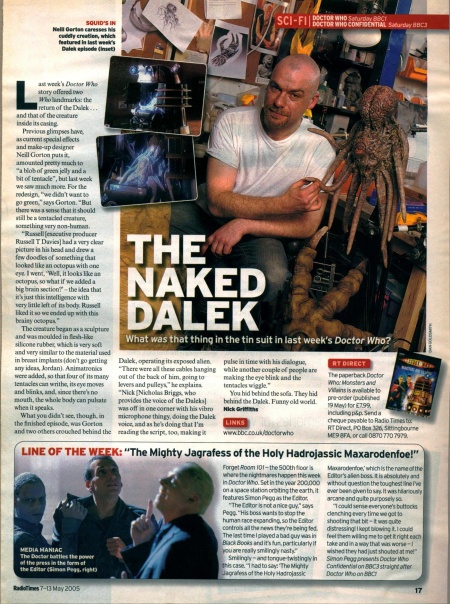 What was that thing in the tin suit in last week's Doctor Who?

Last week's Doctor Who story offered two Who landmarks: the return of the Dalek ... and that of the creature inside its casing.

Previous glimpses have, as current special effects make-up designer Gorton puts it, amounted pretty much to blob of green jelly and a bit of tentacle", but last week saw much more. For the design, "we didn't want to go green," says Gorton. "But was a sense that it should be a tentacled creature, something very non-human.

Russell [executive producer Russell T Davies] had a very clear picture in his head and drew a doodles of something that ked like an octopus with one I went, 'Well, it looks like an octopus, so what if we added a big brain section?' - the idea that just this intelligence with little left of its body. Russell liked it so we ended up with this brainy octopus."

The creature began as a sculpture and was moulded in flesh-like cone rubber, which is very soft and very similar to the material used in breast implants (don't go getting ideas, Jordan). Animatronics were added, so that four of its many tentacles can writhe, its eye moves blinks, and, since there's no mouth, the whole body can pulsate when it speaks.

What you didn't see, though, in finished episode, was Gorton two others crouched behind the Dalek, operating its exposed alien. "There were all these cables hanging out of the back of him, going to levers and pulleys," he explains. "Nick [Nicholas Briggs, who provides the voice of the Daleks] was off in one corner with his vibro microphone thingy, doing the Dalek voice, and as he's doing that I'm reading the script, too, making it

pulse in time with his dialogue, while another couple of people are making the eye blink and the tentacles wiggle."

The Doctor battles the power of the press in the form of the Editor (Simon Pegg, right)

Forget Room 101-the 500th floor is where the nightmares happen this week in Doctor Who. Set in the year 200,000 on a space station orbiting the earth, it features Simon Pegg as the Editor.

"The Editor is not a nice guy," says Pegg. "His boss wants to stop the human race expanding, so the Editor controls all the news they're being fed. The last time I played a bad guy was in Black Books and it's fun, particularly if you are really smilingly nasty."

Smilingly - and tongue-twistingly in this case. "I had to say: 'The Mighty Jagrafess of the Holy Hadrojassic Maxarodenfoe,' which is the name of the Editor's alien boss. It is absolutely and without question the toughest line I've ever been given to say. It was hilariously arcane and quite purposely so.

"I could sense everyone's buttocks clenching every time we got to shooting that bit - it was quite distressing! I kept blowing it. I could feel them willing me to get it right each take and in a way that was worse - I wished they had just shouted at me!" Simon Pegg presents Doctor Who Confidential on BBC3 straight after Doctor Who on BBC1