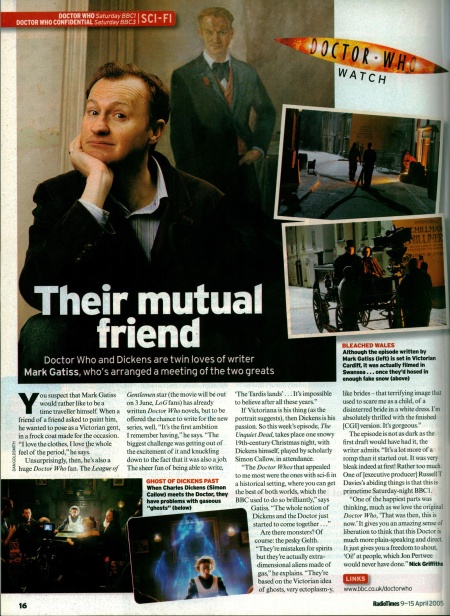 Doctor Who and Dickens are twin loves of writer Mark Gatiss, who's arranged a meeting of the two greats

You suspect that Mark Gatiss would rather like to be a time traveller himself. When a friend of a friend asked to paint him, he wanted to pose as a Victorian gent, in a frock coat made for the occasion. "I love the clothes, I love the whole feel of the period," he says.

Unsurprisingly, then, he's also a huge Doctor Who fan. The League of Gentlemen star (the movie will be out on 3 June, LoG fans) has already written Doctor Who novels, but to be offered the chance to write for the new series, well, "It's the first ambition I remember having," he says. "The biggest challenge was getting out of the excitement of it and knuckling down to the fact that it was also a job. The sheer fun of being able to write, 'The Tardis lands' ... It's impossible to believe after all these years."

If Victoriana is his thing (as the portrait suggests), then Dickens is his passion. So this week's episode, The Unquiet Dead, takes place one snowy 19th-century Christmas night, with Dickens himself, played by scholarly Simon Callow, in attendance.

"The Doctor Whos that appealed to me most were the ones with sci-fi in a historical setting, where you can get the best of both worlds, which the BBC used to do so brilliantly," says Gatiss. "The whole notion of Dickens and the Doctor just started to come together ..."

Are there monsters? Of course: the pesky Gelth. "They're mistaken for spirits but they're actually extra-dimensional aliens made of gas," he explains. "They're based on the Victorian idea of ghosts, very ectoplasm-y, like brides - that terrifying image that used to scare me as a child, of a disinterred bride in a white dress. I'm absolutely thrilled with the finished [CM] version. It's gorgeous."

The episode is not as dark as the first draft would have had it, the writer admits. "It's a lot more of a romp than it started out. It was very bleak indeed at first! Rather too much. One of [executive producer] Russell T Davies's abiding things is that this is primetime Saturday-night BBC1.

"One of the happiest parts was thinking, much as we love the original Doctor Who, 'That was then, this is now.' It gives you an amazing sense of liberation to think that this Doctor is much more plain-speaking and direct. It just gives you a freedom to shout, 'Oi!' at people, which Jon Pertwee would never have done."

Caption: Bleached Wales. Although the episode written by Mark Gatiss (left) is set in Victorian Cardiff, it was actually filmed in Swansea ... once they'd hosed in enough fake snow (above)

Caption: GHOST OF DICKENS PAST When Charles Dickens (Simon Callow) meets the Doctor, they have problems with gaseous "ghosts" (below)