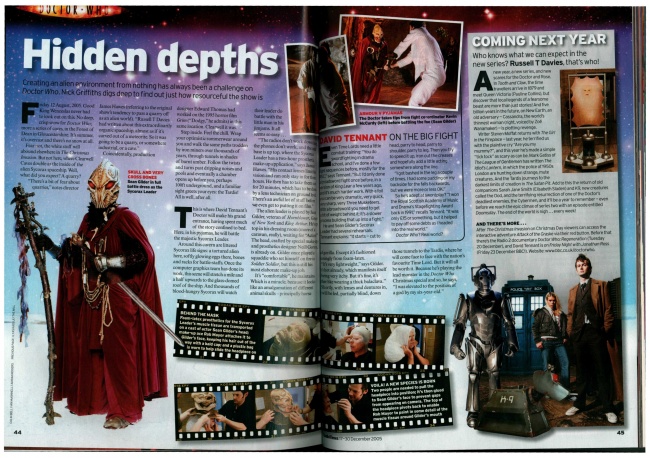 Creating an alien environment from nothing has always been a challenge on Doctor Who. Nick Griffiths digs deep to find out just how resourceful the show is

Friday 12 August, 2005. Good King Wenceslas never had to look out on this. No deep, crisp snow for Doctor Who; more a series of caves, in the Forest of Dean in Gloucestershire. It's summer, it's overcast and there's no snow at all.

Fear not, the white stuff will abound elsewhere in The Christmas Invasion. But not here, where Clearwell Caves double as the inside of the alien Sycorax spaceship. Well, what did you expect? A quarry?

"There's a bit of fear about quarries," notes director James Hawes (referring to the original show's tendency to pass a quarry off as an alien world). "Russell T Davies had written about this extraordinarily organic spaceship, almost as if it's carved out of a meteorite. So it was going to be a quarry, or somewhere industrial, or a cave."

Coincidentally, production designer Edward Thomas had worked on the 1995 horror film Grim ("Dodgy," he admits) in this same location. Clearwell it was.

Step inside. Feel the chill. Wrap your optimistic summerwear around you and walk the same paths trodden by iron miners over thousands of years, through tunnels in shades of burnt umber. Follow the twists and turns past dripping noises and pools and eventually a chamber opens up before you, perhaps 100ft underground, and a familiar sight greets your eyes: the Tardis! All is well, after all.

This is where David Tennant's Doctor will make his grand entrance, having spent much of the story confined to bed. Here, in his pyjamas, he will battle the majestic Sycorax Leader.

Around this cavern are littered Sycorax life signs: a tortured alien here, softly glowing eggs there, bones and racks for battle-staffs. Once the computer graphics team has done its work, this scene will stretch a mile and a half upwards to the glass-domed roof of the ship. And thousands of blood-hungry Sycorax will watch their leader do battle with the little man in his jimjams. It all seems so easy .. .

"The radios don't work the phones don't work down here, and the unit base is up top, where the Sycorax Leader has a two-hour prosthetic make-up application," says James Hawes. "His contact lenses his limit vision and can only stay in for three hours. He then has to take them out for 20 minutes, which has to be done by a lens technician on ground level. There's an awful lot of stuff before we even get to putting it on film."

The alien leader is played by Sean Gilder, veteran of Hornblower, Gangs of New York and King Arthur. He's up top in his dressing room (more of a caravan, really), waiting for "Action".

The head, crafted by special make-up and prosthetics designer Neill Gorton is already on. Gilder once played a squaddie who set himself on fire in Soldier Soldier, but this is still his most elaborate make-up job.

It's "comfortable", he maintains. Which is a miracle, because it looks like an amalgamation of different animal skulls - principally horse and gorilla. Except it's fashioned cunningly from foam-latex.

"It's very lightweight," says Gilder. It's hot already, which manifests itself being very itchy. But it's fine, it's another like wearing a thick balaclava." Shortly, with lenses and dentures in, will be led, partially blind, down those tunnels to the Tardis, where he will come face to face with the nation's favourite Time Lord. But it will all be worth it. Because he's playing the lead monster in the Doctor Who Christmas special and so, he says, "I was elevated to the position of a god by my six-year-old."

David Tennant on the big fight

Even Time Lords need a little combat training: "You do swordfighting in drama school, and I've done a few fight sequences before, mostly for the RSC," says Tennant. "But I'd only done a broadsword fight once before, in a version of King Lear a few years ago, it's much harder work. With a foil you can be very dramatic, very quick, very sharp, very Three Musketeers. With broadsword you need to get bit of weight behind it; it's a slower process building that up into a fight." He and Sean Gilder's Sycorax Leader had several rehearsals. Tennant explains: "It starts — cut to head, parry to head, parry to shoulder, parry to leg. Then you try to speed it up, iron out the creases and hopefully add a little acting somewhere along the line.

"I got bashed in the leg a couple of times. I had some padding on my backside for the falls backwards, but we were more or less OK."

So he's adept at swordplay? "I won the Royal Scottish Academy of Music and Drama's Stagefighting Award back in 1991," recalls Tennant. "It was only £15 or something, but it helped to pay off some debts as I headed into the real world."

Who knows what we can expect in the new series? Russell T Davies, that's who!

Anew year, a new series, and new scares for the Doctor and Rose. In Tooth and Claw, the time travellers arrive in 1879 and meet Queen Victoria (Pauline Collins), but discover that local legends of a fearsome beast are more than just stories! And five billion years in the future, on New Earth, an old adversary — Cassandra, the world's thinnest woman (right, voiced by Zoe Wanamaker) — is plotting revenge.

Writer Steven Moffat returns with The Girl in the Fireplace — last year, he terrified us with the plaintive cry "Are you my mummy?", and this year he's made a simple "tick tock" as scary as can be. Mark Gatiss of The League of Gentlemen has written The Idiot's Lantern, in which the police of 1950s London are hunting down strange, mute creatures. And the Tardis journeys to the darkest limits of creation in The Satan Pit. Add to this the return of old companions Sarah Jane Smith (Elisabeth Sladen) and K9, new creatures called the Ood, and the terrifying resurrection of one of the Doctor's deadliest enemies, the Cybermen, and it'll be a year to remember — even before we reach the epic climax of series two with an episode entitled Doomsday. The end of the world is nigh ... every week!

After The Christmas Invasion on Christmas Day viewers can access the interactive adventure Attack of the Graske via their red button. Before that there's the Radio 2 documentary Doctor Who: Regeneration (Tuesday 20 December), and David Tennant is on Friday Night with Jonathan Ross (Friday 23 December BBC1). Website: www.bbc.co.uk/doctorwho.

Sean Gilder in full battle dress as the Sycorax Leader

Foam-latex prosthetics for the Sycorax Leader's muscle tissue are transported on a cast of actor Sean Gilder's head; make-up ace Rob Mayor attaches it to Gilder's face, keeping his hair out of the way with a bald cap; and a plastic bag is worn to help slide the headpiece on

VOILA! A NEW SPECIES IS BORN 1 Two people are needed to pull the headpiece into position; it's then glued to Sean Guilder's face to provent gaps from appearing on camera. The top of the headpiece pivots back to enable Rob Mayor to paint in some detail of the muscle tissue around Gilder's mouth