Reality can be a killer 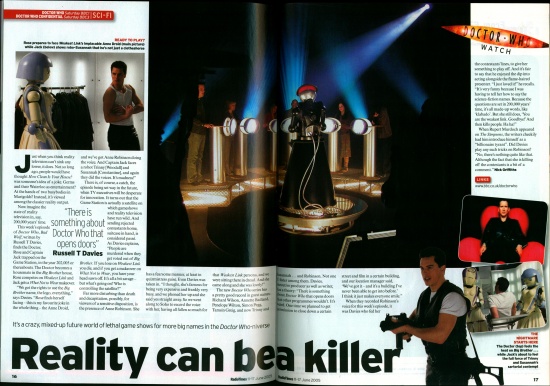 It's a crazy, mixed-up future world of lethal game shows for more big names in the Doctor Who-niverse

Just when you think reality television can't sink any lower, it does. Not so long ago, people would have thought How Clean Is Your House? was someone's idea of a joke. Germs and their Waterloo as entertainment? At the hands of two busybodies in Marigolds? Instead, it's viewed among the classier reality output.

This week's episode of Doctor Who, Bad Wolf, written by Russell T Davies, finds the Doctor, Rose and Captain Jack trapped on the Game Station, in the year 202,005 or thereabouts. The Doctor becomes a housemate in the Big Brother house, Rose competes on Weakest Link and Jack gets a What Not to Wear makeover.

"We got the rights to use the Big Brother name, the logo, everything," says Davies. "Rose finds herself facing — this is my favourite joke in the whole thing — the Anne Droid, and we've got Anne Robinson doing the voice. And Captain Jack faces a robot Trinny [Woodall] and Susannah [Constantine], and again they did the voices. It's madness!"

There is, of course, a catch, the episode being set way in the future, when TV executives will be desperate for innovation. It turns out that the Game Station is actually a satellite on which gameshows and reality television have run wild. And sending rejected contestants home, suitcase in hand, is considered passé. As Davies explains, "People are murdered when they get voted out of Big Brother. If you lose on Weakest Link you die, and if you get a makeover on What Not to Wear, you have your head sawn off. It's all a bit savage — but what's going on? Who is controlling the satellite?"

Far more disturbing than death and decapitation, possibly, for viewers of a sensitive disposition, is the presence of Anne Robinson. She has a fearsome manner, at least in quizmistress guise. Even Davies was taken in. "I thought, she's famous for being very expensive and frankly very busy, and we phoned her up and she said yes straight away. So we went along to Soho to record the voice with her, having all fallen so much for that Weakest Link persona, and we were sitting there in dread. And she came along and she was lovely!"

The new Doctor Who series has a pretty good record in guest names: Richard Wilson, Annette Badland, Penelope Wilton, Simon Pegg, Tamsin Greig, and now Trinny and Susannah ... and Robinson. Not one C-lister among them. Davies, executive producer as well as writer, has a theory: "There is something out Doctor Who that opens doors that other programmes wouldn't. It's weird. One time we planned to get Permission to close down a certain street and film in a certain building, and our location manager said, 'We've got it — and it's a building I've never been able to get into before.' I think it just makes everyone smile."

When they recorded Robinson's voice for this week's episode, it was Davies who fed her the contestants' lines, to give her something to play off. And it's fair to say that he enjoyed the dip into acting alongside the flame-haired presenter. "I just loved it!" he recalls. "It's very funny because I was having to tell her how to say the science-fiction names. Because the questions are set in 200,000 years' time, it's all made-up words, like 'klabado'. But she still does, 'You are the weakest link. Goodbye!' And then kills people. Ha ha!"

When Rupert Murdoch appeared on The Simpsons, the writers cheekily had him introduce himself as a "billionaire tyrant". Did Davies play any such tricks on Robinson? "No, there's nothing quite like that. Although the fact that she is killing off the contestants is a bit of a comment."

Caption: THE NIGHTMARE STARTS HERE The Doctor (top) feels the heat on Big Brother... while Jack's about to feel the full force of Trinny and Susannah's sartorial contempt