Return of the Daleks! 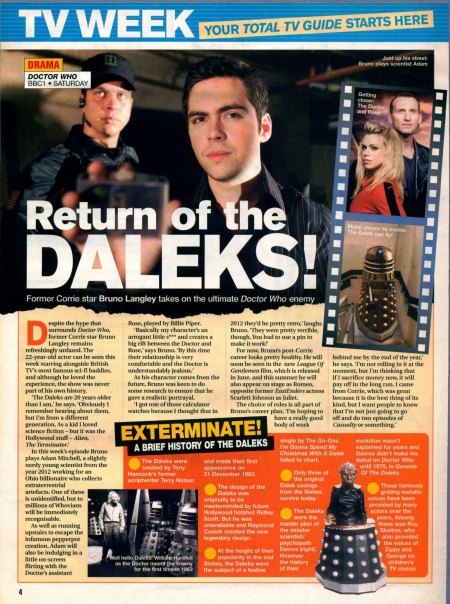 Despite the hype that surrounds Doctor Who, former Corrie star Bruno Langley remains refreshingly unfazed. The 22-year-old actor can be seen this week starring alongside British TV's most famous sci-fi baddies, and although he loved the experience, the show was never part of his own history.

'The Daleks are 20 years older than I am,' he says. 'Obviously I remember hearing about them, but I'm from a different generation. As a kid I loved science fiction - but it was the Hollywood stuff - Alien, The Terminator.'

In this week's episode Bruno plays Adam Mitchell, a slightly nerdy young scientist from the year 2012 working for an Ohio billionaire who collects extraterrestrial artefacts. One of these is unidentified, but to millions of Whovians will be immediately recognisable.

As well as running upstairs to escape the infamous pepperpot creation, Adam will also be indulging in a little on-screen flirting with the Doctor's assistant Rose, played by Billie Piper.

'Basically my character's an arrogant little s*** and creates a big rift between the Doctor and Rose,' says Bruno. 'By this time their relationship is very comfortable and the Doctor is understandably jealous.'

As his character comes from the future, Bruno was keen to do some research to ensure that he gave a realistic portrayal.

'I got one of those calculator watches because I thought that in 2012 they'd be pretty retro,' laughs Bruno. 'They were pretty terrible, though. You had to use a pin to make it work!'

For now, Bruno's post-Corrie career looks pretty healthy. He will soon be seen in the new League Of Gentlemen film, which is released in June, and this summer he will also appear on stage as Romeo, opposite former EastEnders actress Scarlett Johnson as Juliet.

The choice of roles is all part of Bruno's career plan. 'I'm hoping to have a really good body of work behind me by the end of the year,' he says. 'I'm not rolling in it at the moment, but I'm thinking that if I sacrifice money now, it will pay off in the long run. I came from Corrie, which was great because it is the best thing of its kind, but I want people to know that I'm not just going to go off and do two episodes of Casualty or something.'

Getting closer: The Doctor and Rose

Metal shows its mettle: In The Dalek can fly!

A BRIEF HISTORY OF THE DALEKS

Caption: Well hello Daleks: William Hartnell as the Doctor meets the enemy for the first time in 1963