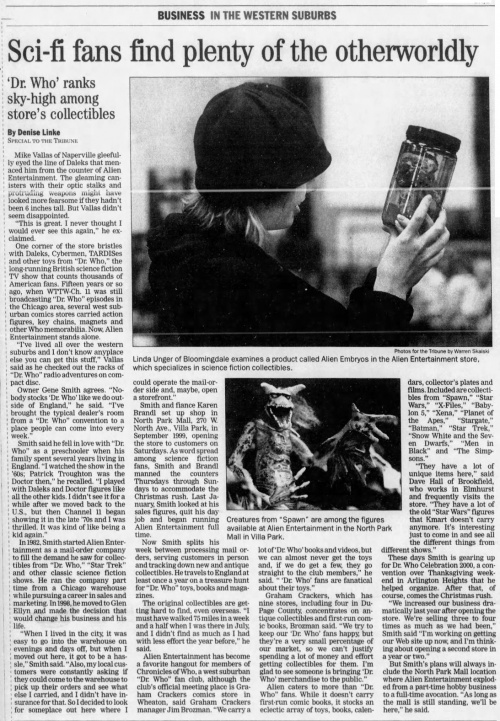 Mike Vallas of Naperville gleefully eyed the line of Daleks that menaced him from the counter of Alien Entertainment. The gleaming canisters with their optic stalks and protruding weapons might have looked more fearsome if they hadn't been 6 inches tall. But Vallas didn't seem disappointed.

"This is great. I never thought I would ever see this again," he exclaimed.

One corner of the store bristles with Daleks, Cybermen, TARDISes and other toys from "Dr. Who," the long-running British science fiction TV show that counts thousands of American fans. Fifteen years or so ago, when WTTW-Ch. 11 was still broadcasting "Dr. Who" episodes in the Chicago area, several west suburban comics stores carried action figures, key chains, magnets and other Who memorabilia. Now, Alien Entertainment stands alone.

"I've lived all over the western suburbs and I don't know anyplace else you can get this stuff," Vallas said as he checked out the racks of "Dr. Who radio adventures on compact disc.

Owner Gene Smith agrees. "Nobody stocks 'Dr. Who' like we do outside of England," he said. "I've brought the typical dealer's room from a "Dr. Who" convention to a place people can come into every week."

Smith said he fell in love with "Dr. Who" as a preschooler when his family spent several years living in England. "I watched the show in the '60s; Patrick Troughton was the Doctor then," he recalled. "I played with Daleks and Doctor figures like all the other kids. I didn't see it for a while after we moved back to the U.S., but then Channel 11 began showing it in the late '70s and I was thrilled. It was kind of like being a kid again."

In 1982, Smith started Alien Entertainment as a mail-order company to fill the demand he saw for collectibles from "Dr. Who," "Star Trek" , and other classic science fiction shows. He ran the company part time from a Chicago warehouse while pursuing a career in sales and marketing. In 1998, he moved to Glen Ellyn and made the decision that would change his business and his life.

"When I lived in the city, it was easy to go into the warehouse on evenings and days off, but when I moved out here, it got to be a hassle," Smith said. "Also, my local customers were constantly asking if they could come to the warehouse to pick up their orders and see what else I carried, and I didn't have insurance for that. So I decided to look for someplace out here where I could operate the mail-order side and, maybe, open a storefront."

Now Smith splits his week between processing mail orders, serving customers in person and tracking down new and antique collectibles. He travels to England at least once a year on a treasure hunt for "Dr. Who toys, books and magazines.

The original collectibles are getting hard to find, even overseas. "I must have walked 75 miles in a week and a half when I was there in July, and I didn't find as much as I had with less effort the year before," he said.

Alien Entertainment has become a favorite hangout for members of Chronicles of Who, a west suburban "Dr. Who fan club, although the club's official meeting place is Graham Crackers comics store in Wheaton, said Graham Crackers manager Jim Brozman. "We carry a lot of 'Dr. Who' books and videos, but we can almost never get the toys and, if we do get a few, they go straight to the club members," he said. "'Dr Who' fans are fanatical about their toys."

Graham Crackers, which has nine stores, including four in DuPage County, concentrates on antique collectibles and first-run comic books, Brozman said. "We try to keep our 'Dr. Who' fans happy, but they're a very small percentage of our market, so we can't justify spending a lot of money and effort getting collectibles for them. I'm glad to see someone is bringing 'Dr. Who merchandise to the public."

Alien caters to more than "Dr. Who" fans. While it doesn't carry first-run comic books, it stocks an eclectic array of toys, books, calendars, collector's plates and films. Included are collectibles from "Spawn," "Star Wars," "X-Files," "Babylon 5," "Xena," "Planet of the Apes," "Stargate," "Batman," "Star Trek," "Snow White and the Seven Dwarfs," "Men in Black" and "The Simpsons."

"They have a lot of unique items here," said Dave Hall of Brookfield, who works in Elmhurst and frequently visits the store. "They have a lot of the old "Star Wars" figures that Kmart doesn't carry anymore. It's interesting just to come in and see all the different things from different shows."

These days Smith is gearing up for Dr. Who Celebration 2000, a convention over Thanksgiving weekend in Arlington Heights that he helped organize. After that, of course, comes the Christmas rush.

"We increased our business dramatically last year after opening the store. We're selling three to four times as much as we had been," Smith said "I'm working on getting our Web site up now, and I'm thinking about opening a second store in a year or two."

But Smith's plans will always include the North Park Mall location where Alien Entertainment exploded from a part-time hobby business to a full-time avocation. "As long as the mall is still standing, we'll be here," he said.

Caption: Creatures from "Spawn" are among the figures available at Alien Entertainment in the North Park Mall in Villa Park.