Shades of Dr Who behind new toys 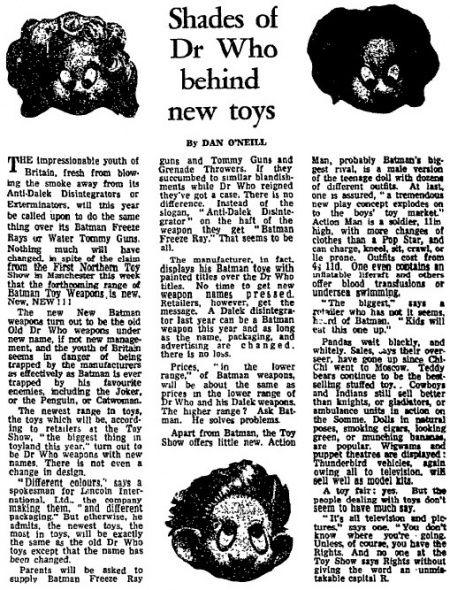 THE impressionable youth of Britain, fresh from blowing the smoke away from its Anti-Dalek Disintegrator, or Exterminators, will this year be called upon to do the same thing over its Batman Freeze Rays or Water Tommy Guns. Nothing much will have changed, in spite of the claim from the First Northern Toy Show in Manchester this week that the forthcoming range of Batman Toy Weapons, is new. New. NEW!!!

The new New Batman weapons turn out to be the old Old Dr Who weapons under new name, If not new management. and the youth of Britain seems in danger of being trapped by the manufacturers as effectively as Batman is ever trapped by his favourite enemies, Including the Jolter, or the Penguin, or Catwoman.

The newest range to toys, the toys which will be, according to retailers at the Toy Show, "the biggest thing in toyland this year," turn out to be Dr Who weapons with new names. There is not even a Change in design.

"Different colours," says a spokesman for Lincoln International Ltd. the company making them, "and different packaging." But otherwise, he admits, the newest toys, the most in toys, will be exactly the same as the old Dr Who toys except that the name has been changed.

Parents will be asked to supply Batman Freeze Ray guns and Tommy Guns and Grenade Throwers. If they succumbed to similar blandishments while Dr Who reigned they've got a case. There is no difference. Instead of the slogan. "Anti-Dalek Disintegrator" on the halt of the weapon they get "Batman Freeze Ray." That seems to be all.

The manufacturer. On fact, displays his Batman this with painted titles over the Dr Who titles. No time to get new weapon names greased. Retailers, however, get the message. A Dalek disintegrator last year can be a Batman weapon this year and as long as the name, packaging. and advertising are changed. there Is no loss.

Prices, "In the lower range." of Batman weapons, will be about the same as prices M the lower range of Dr Who and his Dales weapons. The higher ranger Ask Bat. man. He solves problems.

Apart from Batman, the Toy Show offers little new. Action Man, probably Batman's biggest rival, is a male version of the teenage doll with dorms of different octets. At lam, one is assured, "a tremendous new play concept explodes on to the boys' toy market" Action Man is a soldier, 11M high, with more eh/rules of Clothes than a Pop Star, and can charge, kneel, set, crawl. or Ile prone. Outfits cost from 4s l1d. One even contains an unflatable liferaft and others offer blood transfusions or undersea swimming,

"The biggest; says a retailer who has not it seems, heard of Batman. "Kids will eat this one up."

A toy fair: yes. But the people dealing with toys don't seem to hate much say.

"It's all television and pictures." says one. "You don't know where you're going. Unless, of course, you have the Rights. And no one at the Toy Show says Rights without giving the word an unmistakable capital R.