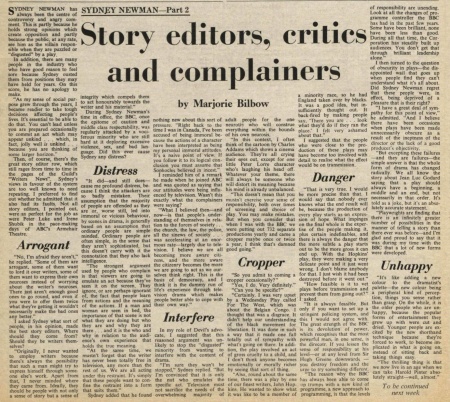 SYDNEY NEWMAN has always been the centre of controversy and angry comment. This is partly because he holds strong opinions which create opposition and partly because the public, at any rate, see him as the villain responsible when they are puzzled or "disgusted" by a play.

In addition, there are many people in the industry who who have good reason to feel sore because Sydney ousted them from positions they may have held for years. On this score, he has no apology to make.

"As my sense of social purpose grew through the years, I became readier to take tough decisions affecting people's lives. It's essential to be able to do that. You can't lead unless you are prepared occasionally to commit an act which may appear unkind ... which, in fact, jolly well is unkind ... because you are thinking of some larger horizon."

Then, of course, there's the great story editor row, which still rages from time to time in the pages of the Guild's "Writers News". Sydney's views in favour of the system are too well known to need repeating. I preferred to find out whether he admitted that it also had its faults. Not all story editors, I pointed out, were as perfect for the job as were Peter Luke and Irene Shubik in the pace-making days of ABC's Armchair Theatre.

"No, I'm afraid they aren't," he replied. "Some of them are arrogant, some of them want to lord it over writers, some of them want to express their own neuroses instead of worrying about the writer's neuroses. There just aren't enough good ones to go round, and even if you were to offer them twice what they're getting it wouldn't necessarily make the bad ones any better."

I asked Sydney what sort of people, in his opinion, made the best story editors. Where should they come from? Should they be writers themselves?

"Originally, I never wanted to employ writers because there's always the possibility that such a man might try to express himself through someone else's work. Apart from that, I never minded where they came from. Ideally, they should be people with not only a sense of story but a sense of integrity which compels them to act honourably towards the writer and his material."

During Sydney Newman's time in office, the BBC, once the epitome of caution and middle class respectability, was regularly attacked by a vociferous minority who are still hard at it deploring excessive violence, sex, and bad language. Did this ever cause Sydney any distress?

"It did—and still does—cause me profound distress, because I think the attackers are so badly mistaken. Their assumption that the majority of people are offended as they are or, worse still, led into immoral or vicious behaviour, by scenes in drama, is generally based on an assumption that ordinary people are simple minded. Ordinary people are often simple, in the sense that they aren't sophisticated, but this doesn't carry with it the connotation that they also lack intelligence.

"The strongest argument used by people who complain is that viewers are going to emulate an act because they've seen it on the screen. They ignore, or are perhaps ignorant of, the fact that people learn from actions and the meaning of the actions. If a man and woman are seen in bed, the importance of that scene is not what they are doing but who they are and why they are there .. , and it is the who and why in relation to the audience's own experience that holds the true meaning.

"At the same time, we mustn't forget that the writer has never been totally free in television, any more than the rest of us. We are all acting under this restraint. It's simply that these people want to confine the restraint into a form that suits them."

Sydney added that he found nothing new about this sort of pressure. "Right back to the time I was in Canada, I've been accused of being immoral because the actions of a character have been interpreted as being my personal immoral attitudes. It's a naive point of view. If you follow it to its logical conclusion you must assume that Sophocles believed in incest."

I reminded him of a remark he made when he joined ABC and was quoted as saying that our attitudes were being influenced by television. Wasn't this exactly what the complainers were saying?

"What I believed then—and now—is that people's understanding of themselves in relation to the forces of society ... the church, the law, the police, all the sinews of society ... was accelerating at an enormous rate—largely due to television. I believe we are all becoming more aware citizens, and the more aware the citizenry becomes the more we are going to act as we ourselves think right. This is the basis of democracy, and I think it is the dummy run of life's experience through television drama which makes people better able to cope with their own way."

In my role of Devil's advocate. I suggested that this reasoned argument was unlikely to stop the "disgusted" minority from wanting to interfere with the content of drama.

"I'm sure they won't be stopped." Sydney replied. "But I'm convinced that it is only the nut who emulates the specific act. Television must not sacrifice the needs of the overwhelming majority of adult people for the one neurotic who will construe everything within the bounds of his own neurosis.

"In this context, I often think of the cartoon by Charles Addams which shows a cinema audience. They're all crying their ayes out, except for one little Peter Lorre character who's laughing his head off. Whatever your theme, there will always be someone who will distort its meaning because his mind is already unbalanced.

"This doesn't mean that you mustn't exercise your sense of responsibility, both over times of screening and choice of play. You may make mistakes. But when you consider that when I was with the BBC we were putting out 732 separate productions yearly and came a cropper maybe once or twice a year, I think that's damned good going."

"So you admit to coming a cropper occasionally?"

"Certainly. I was very upset by a Wednesday Play called For The West, which was about the Belgian Congo. I thought that was a disgrace. It didn't help our understanding of the black movement for liberation. It was done in such a way that it made one fall totally out of sympathy with what's going on there. In addition, the play involved an act of gross cruelty to a child, and I don't think anyone becomes emotionally or morally richer by seeing that sort of thing.

"Also, round about the same time, there was a play by one of our finest writers, John Hopkins. He wanted to show what it was like to be a member of a minority race, so he had England taken over by blacks. It was a good idea, but insufficiently thought out. It back-fired by making people say, "I here you are .. . look what they'd do if they ran the place.' I felt very ashamed about that."

I suggested that the people who were close to the production of these plays may have become too involved with detail to realise what the effect would be on transmission.

"That is very true. I would be more precise than that. I would say that nobody ever knows what the end result will be, because the production of every play starts as an expression of hope. What impinges on the final whole is the expertise of the people making it, plus certain indefinables, and there is always the danger that the more subtle a play starts out to be the more gross it can end up. With the Hopkins' play, they were making a very delicate point and it just went wrong. I don't blame anybody for that. I just wish it had been destroyed before it went out."

"How feasible is it to vet plays before transmission and prevent them from going out'?" I asked.

"It is always feasible. But only if you want to set up a stringent policing system, and this I would not agree with. The great strength of the BBC is its devolution of power, which recognises that the most powerful man, in one sense, is the director. If you lessen the sense of responsibility at his level—or at any level from Sir Hugh Greene downwards — you destroy freedom and the urge to try something different.

"The reason why the BBC has always been able to come up trumps with a new kind of programme, a new approach to programming, is that the levels of responsibility are unending, Look at all the changes of programme controller the BBC has had in the past few years. Some have been brilliant, none have been less than good. During all that time, the Corporation has steadily built up audiences. You don't get that through brilliant leadership alone."

I then turned to the question of obscurity in plays—the disappointed wail that goes up when people find they can't understand what it's all about. Did Sydney Newman regret that these people were, in effect, being deprived of a pleasure that is their right?

"I have a great deal of sympathy for this point of view," he admitted. "And I believe there have been occasions when plays have been made unnecessarily obscure as a result of the ineptness of the director or the lack of a good producer's objectivity.

"But excepting these failures —and they are failures—the simple answer is that the whole form of drama has changed radically. We all know the story about Jean Luc Godard saying that a play should always have a beginning, a middle and an end, but not necessarily in that order, It's told as a joke, but it's an absolutely accurate statement.

"Playwrights are finding that there is an infinitely greater number of possibilities in the manner of telling a story than there ever was before—and I'm glad and proud to say that it was during my time with the BBC that a lot of new forms were developed.

"It's like adding a new colour to the dramatist's palette—the new colour being a peripheral kind of perception, things you sense rather than grasp. On the whole, it is the older people who are unhappy, because the popular forms of entertainment they grew up with were cut and dried. Younger people are excited by the new shorthand technique because they're forced to work, to become implicated in what is going on, instead of sitting back and taking things easy.

"The thrilling thing is that we now live in an age when we can take Harold Pinter absolutely straight—well, almost."