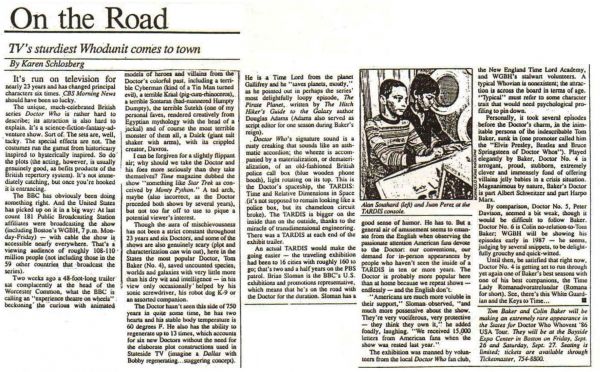 It's run on television for nearly 23 years and has changed principal characters six times. CBS Morning News should have been so lucky.

The unique, much-celebrated British series Doctor 1t9w is rather hard to describe; us attraction is also hard to explain. He's a science-fiction-fantasy-adventure show. Sort of. The sets arc, well, tacky. The special effects are not. The costumes run the gamut from historically inspired to hysterically inspired. So do the plots (the acting, however, is usually genuinely good, as befits products of the British repertory system). It's not immediately catching, but once you're hooked it is entrancing.

The BBC has obviously been doing something right. And the United States has picked up on it in a big way: At last count 181 Public Broadcasting Station affiliates were broadcasting the show (including Boston's WGBH, 7 p.m. Monday-Friday) with cable the show is accessible nearly everywhere. That's viewing audience of roughly 108-110 million people (not including those in the 59 other countries that broadcast the series).

Two weeks ago a 48-foot-long trailer sat complacently at the head of the Worcester Common, what the BBC is calling an "experience theatre on wheels" beckoning the curious with animated models of heroes and villains from the Doctor's colorful past, including a terrible Cyberman (kind of a Tin Man turned evil), a terrible Kraal (pig-urn-rhinoceros), a terrible Sontaran (bad-mannered Humpty Dumpty), the terrible Sutekh (one of my personal (ayes, rendered creatively from Egyptian mythology with the head of a jackal) and of course the most terrible monster of them all, a Dalek (giant salt shaker with arms), with its crippled creator, Davros.

I can be forgiven for a slightly flippant air; why should we take the Doctor and his foes more seriously than they take themselves? Time magazine dubbed the show "something like Star Trek as conceived by Monty Python." A tad arch, maybe (also incorrect, as the Doctor receded both shows by several years), but not too far off to use to pique a potential viewer's interest.

Though the aura of mischievousness has not been a strict constant throughout 23 years and six Doctors, and some of the shows are also genuinely scary (plot and characterization can win out), here in the States the most popular Doctor, Tom Baker (No. 4), saved uncounted species, worlds and galaxies with very little more than his dry wit and intelligence — in his view only occasionally helped by his sonic screwdriver, his robot dog K-9 or an assorted companion.

The Doctor hasn't seen this side of 750 years in quite some time, he has two hearts and his stable body temperature is 60 degrees F. He also has the ability to regenerate up to 13 times, which accounts for six new Doctors without the need for the elaborate plot constrictions used in Stateside TV (imagine a Dallas with Bobby regenerating...staggering concept).

He is a Time Lord from the planet Gallifrey and he "saves planets, mostly," as he pointed out in perhaps the series' most delightfully loopy episode, The Pirate Planet, written by The Hitch Hiker's Guide to the Galaxy author Douglas Adams (Adams also served as script editor for one season during Baker's reign).

Doctor Who's signature sound is a rusty creaking that sounds like an asthmatic accordion; the wheeze is accompanied by a materialization, or dematerialization, of an old-fashioned British police call box (blue wooden phone booth), light rotating on its top. ibis is the Doctor's spaceship, the TARDIS: Time and Relative Dimensions in Space (it's not supposed to remain looking like a police box, but its chameleon circuit broke). The TARDIS is bigger on the inside than on the outside, thanks to the miracle of transdimensional engineering. There was a TARDIS at each end of the exhibit trailer.

An actual TARDIS would make the going easier — the traveling exhibition had been to 16 cities with roughly 160 to go; that's two and a half years on the PBS patrol. Brian Sloman is the BBC's U.S. exhibitions and promotions representative, which means that he's on the road with the Doctor for the duration. Sloman has a good sense of humor. He has to. But a general air of amusement seems to emanate from the English when observing the passionate attention American fans devote to the Doctor: our conventions, our demand for in-person appearances by people who haven't seen the inside of a TARDIS in ten or more years. The Doctor is probably more popular here than at home because we repeat shows —endlessly — and the English don't. "Americans are much more voluble in their support," Sloaman observed. "and much more possessive about the show. They're very vociferous, very protective — they think they own it," he added fondly, laughing. "We received 15,000 letters from American fans when the show was rested last year." The exhibition was manned by volunteers front the local Doctor Who fan club, the New England Time Lord Academy, and WGBH's stalwart volunteers. A typical Whovian is nonexistent; the attraction is across the board in terms of age. "Typical" must refer to some character trait that would need psychological profiling to pin down.

Personally, it took several episodes before the Doctor's charm, in the inimitable persona of the indescribable Tom Baker, sunk in (one promoter called him the "Elvis Presley, Beatles and Bruce Springsteen of Doctor Whos'). Played elegantly by Baker, Doctor No. 4 is arrogant, proud, stubborn, extremely clever and immensely fond of offering villains jelly babies in a crisis situation. Magnanimous by nature, Baker's Doctor is part Albert Schweitzer and part Harpo Marx.

By comparison, Doctor No. 5, Peter Davison, seemed a bit weak, though it would be difficult to follow Baker. Doctor No. 6 is Colin no-relation-to-Tom Baker; WGBH will be showing his episodes early in 1987 — he seems. judging by several snippets. to be delightfully grouchy and quick-witted.

Until then, be satisfied that right now. Doctor No. 1 is getting set to run through yet again one of Baker's best seasons with one of his best companions, the Time Lady Romanadvoratrelundar (Romana for short). See, there's this White Guardian and the Keys to Time...

Tom Baker and Colin Baker will be making an extremely rare appearance in the States for Doctor Who Whovent '86 USA Tour. They will be at the Bayside Expo Center in Boston on Friday, Sept. 26 and Saturday, Sept. 27. Seating is limited: tickets are available through Ticketmaster, 754-8800.