Talking about my regeneration 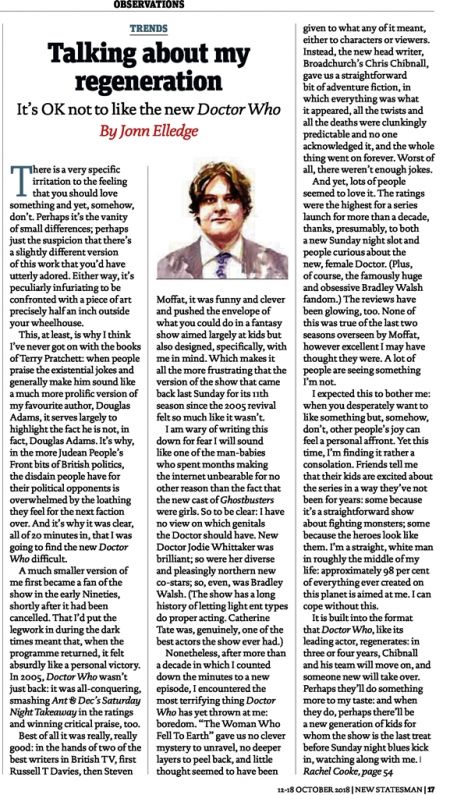 It's OK not to like the new Doctor Who

There is a very specific irritation to the feeling that you should love something and yet, somehow, don't. Perhaps it's the vanity of small differences; perhaps just the suspicion that there's a slightly different version of this work that you'd have utterly adored. Either way, it's peculiarly infuriating to be confronted with a piece of art precisely half an inch outside your wheelhouse.

This, at least, is why I think I've never got on with the books of Terry Pratchett: when people praise the existential jokes and generally make him sound like a much more prolific version of my favourite author, Douglas Adams, it serves largely to highlight the fact he is not, in fact, Douglas Adams. It's why, in the more Judean People's Front bits of British politics, the disdain people have for their political opponents is overwhelmed by the loathing they feel for the next faction over. And it's why it was dear, all of 20 minutes in, that I was going to find the new Doctor Who difficult.

A much smaller version of me first became a fan of the show in the early Nineties, shortly after it had been cancelled. That I'd put the legwork in during the dark times meant that, when the programme returned, it felt absurdly like a personal victory. In 2005, Doctor Who wasn't just back: it was all-conquering, smashing Ant & Dec's Saturday Night Takeaway in the ratings and winning critical praise, too.

Best of all it was really, really good: in the hands of two of the best writers in British TV, first Russell T Davies, then Steven

Moffat, it was funny and clever and pushed the envelope of what you could do in a fantasy show aimed largely at kids but also designed, specifically, with me in mind. Which makes it all the more frustrating that the version of the show that came back last Sunday for its 11th season since the 2005 revival felt so much like it wasn't.

I am wary of writing this down for fear I will sound like one of the man-babies who spent months making the internet unbearable for no other reason than the fact that the new cast of Ghostbusters were girls. So to be clear: I have no view on which genitals the Doctor should have. New Doctor Jodie Whittaker was brilliant; so were her diverse and pleasingly northern new co-stars; so, even, was Bradley Walsh. (The show has a long history of letting light ent types do proper acting. Catherine Tate was, genuinely, one of the best actors the show ever had.)

Nonetheless, after more than a decade in which I counted down the minutes to a new episode, I encountered the most terrifying thing Doctor Who has yet thrown at me: boredom. "The Woman Who Fell To Earth" gave us no clever mystery to unravel, no deeper layers to peel back, and little thought seemed to have been given to what any of it meant, either to characters or viewers. Instead, the new head writer, Broadchurch's Chris Chibnall, gave us a straightforward bit of adventure fiction, in which everything was what it appeared, all the twists and all the deaths were clunkingly predictable and no one acknowledged it, and the whole thing went on forever. Worst of all, there weren't enough jokes.

And yet, lots of people seemed to love it. The ratings were the highest for a series launch for more than a decade, thanks, presumably, to both a new Sunday night slot and people curious about the new, female Doctor. (Plus, of course, the famously huge and obsessive Bradley Walsh fandom.) The reviews have been glowing, too. None of this was true of the last two seasons overseen by Moffat, however excellent I may have thought they were. A lot of people are seeing something I'm not.

I expected this to bother me: when you desperately want to like something but, somehow, don't, other people's joy can feel a personal affront. Yet this time, I'm finding it rather a consolation. Friends tell me that their kids are excited about the series in a way they've not been for years: some because it's a straightforward show about fighting monsters; some because the heroes look like them. I'm a straight, white man in roughly the middle of my life: approximately 98 per cent of everything ever created on this planet is aimed at me. I can cope without this.

It is built into the format that Doctor Who, like its leading actor, regenerates: in three or four years, Chibnall and his team will move on, and someone new will take over. Perhaps they'll do something more to my taste: and when they do, perhaps there'll be a new generation of kids for whom the show is the last treat before Sunday night blues kick in, watching along with me.