Tardis Pizza is Just What the Doctor Ordered 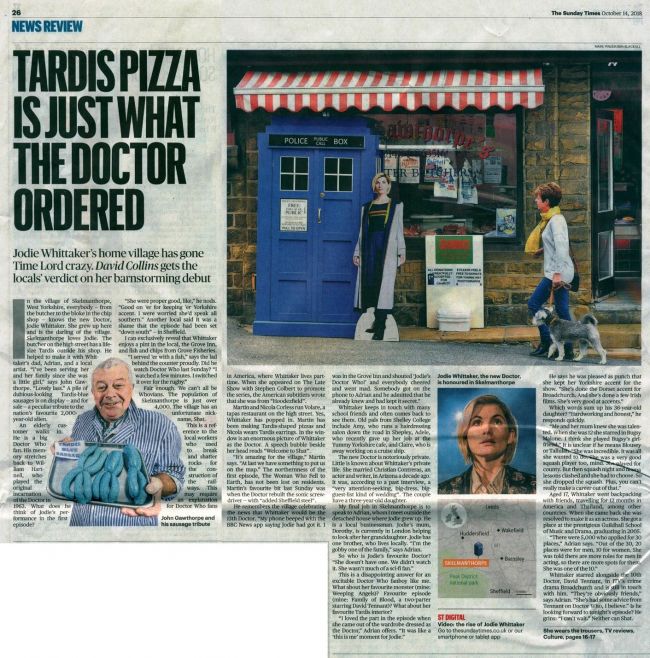 In the village of Skelmanthorpe, West Yorkshire, everybody — from the butcher to the bloke in the chip shop — knows the new Doctor, Jodie Whittaker. She grew up here and is the darling of the village. Skelmanthorpe loves Jodie. The butcher on the high street has a life-size Tardis outside his shop. He helped to make it with Whittaker's dad, Adrian, and a local artist. "I've been serving her and her family since she was a little girl," says John Gawthorpe. "Lovely lass." A pile of dubious-looking Tardis-blue sausages is on display — and for sale — a peculiar tribute to the nation's favourite 2,000-year-old alien.

An elderly customer walks in. He is a big Doctor Who fan. His memory stretches back to William Hartnell, who played the original incarnation of the Doctor in 1963. What does he think of Jodie's performance in the first episode?

"She were proper good, like," he nods. "Good on 'er for keeping 'er Yorkshire accent. I were worried she'd speak all southern." Another local said it was a shame that the episode had been set "down south" — in Sheffield.

I can exclusively reveal that Whittaker enjoys a pint in the local, the Grove Inn, and fish and chips from Grove Fisheries. "I served 'er with a fish," says the lad behind the counter proudly. Did he watch Doctor Who last Sunday? "I watched a few minutes. I switched it over for the rugby."

Fair enough. We can't all be Whovians. The population of Skelmanthorpe is just over 4,000. The village has an unfortunate nickname, Shat.

This is a reference to the local workers who used to break and shatter rocks for the construction of the railways. This may require an explanation for Doctor Who fans in America, where Whittaker lives part-time. When she appeared on The Late Show with Stephen Colbert to promote the series, the American subtitlers wrote that she was from "Hoodezfield".

Martin and Nicola Corless run Volare, a tapas restaurant on the high street. Yes, Whittaker has popped in. Martin has been making Tardis-shaped pizzas and Nicola wears Tardis earrings. In the window is an enormous picture of Whittaker as the Doctor. A speech bubble beside her head reads "Welcome to Shat".

"It's amazing for the village," Martin says. "At last we have something to put us on the map." The northernness of the first episode, The Woman Who Fell to Earth, has not been lost on residents. Martin's favourite bit last Sunday was when the Doctor rebuilt the sonic screwdriver — with "added Sheffield steel".

He remembers the village celebrating the news that Whittaker would be the 13th Doctor. "My phone beeped with the BBC News app saying Jodie had got it. I was in the Grove Inn and shouted Jodie's Doctor Who!' and everybody cheered and went mad. Somebody got on the phone to Adrian and he admitted that he already knew and had kept it secret."

Whittaker keeps in touch with many school friends and often comes back to see them. Old pals from Shelley College include Amy, who runs a hairdressing salon down the road in Shepley, Adele, who recently gave up her job at the Yummy Yorkshire cafe, and Claire, who is away working on a cruise ship.

The new Doctor is notoriously private. Little is known about Whittaker's private life. She married Christian Contreras, an actor and writer, in Arizona a decade ago. It was, according to a past interview, a "very attention-seeking, big-dress, big-guest-list kind of wedding". The couple have a three-year-old daughter.

My final job in Skelmanthorpe is to speak to Adrian, whom I meet outside the detached house where Jodie grew up. He is a local businessman. Jodie's mum, Dorothy, is currently in London helping to look after her granddaughter. Jodie has one brother, who lives locally. "I'm the gobby one of the family," says Adrian.

So who is Jodie's favourite Doctor? "She doesn't have one. We didn't watch it. She wasn't much of a sci-fi fan."

"I loved the part in the episode when she came out of the wardrobe dressed as the Doctor," Adrian offers. "It was like a 'this is me' moment for Jodie"

He says he was pleased as punch that she kept her Yorkshire accent for the show. "She's done the Dorset accent for Broadchurch. And she's done a few Irish films. She's very good at accents."

Which words sum up his 36-year-old daughter? "Hardworking and honest," he responds quickly.

"Me and her mum knew she was talented. When she was 12 she starred in Bugsy Malone. I think she played Bugsy's girlfriend." It is unclear if he means Blousey or Tallulah, "She was incredible. It was all she wanted to do. She was a very good squash player too, mind. She played for county. But then squash night and drama lessons dashed and she had to choose. So she dropped the squash. Plus, you can't really make a career out of that."

Aged 17, Whittaker went backpacking with friends, travelling for 12 months in America and Thailand, among other countries. When she came back she was resolved to make it as an actress. She got a place at the prestigious Guildhall School of Music and Drama, graduating in 2005.

Whittaker starred alongside the 10th Doctor, David Tennant, in ITV's crime drama Broadchurch and is still in touch with him. "They're obviously friends," says Adrian. "She's had some advice from Tennant on Doctor Who, I believe." Is he looking forward to tonight's episode? He grins: "I can't wait." Neither can Shat.

Caption: Jodie Whittaker, the new Doctor, is honoured in Skelmanthorpe