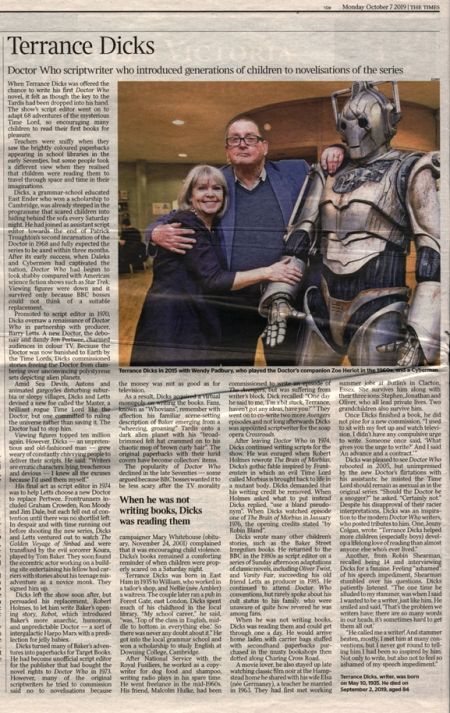 When Terrance Dicks was offered the chance to write his first Doctor Who novel, it felt as though the key to the Tardis had been dropped into his hand. The show's script editor went on to adapt 68 adventures of the mysterious Time Lord, so encouraging many children to read their first books for pleasure.

Teachers were sniffy when they saw the brightly coloured paperbacks appearing in school libraries in the early Seventies, but some people took a different view when they realised that children were reading them to travel through space and time in their imaginations.

Dicks, a grammar-school educated East Ender who won a scholarship to Cambridge, was already steeped in the programme that scared children into hiding behind the sofa every Saturday night. He had joined as assistant script editor towards the end of Patrick Troughton's second incarnation of the Doctor in 1968 and fully expected the series to be axed within three months. After its early success, when Daleks and Cybermen had captivated the nation, Doctor Who had begun to look shabby compared with American science fiction shows such as Star Trek. Viewing figures were down and it survived only because BBC bosses could not think of a suitable replacement.

Promoted to script editor in 1970, Dicks oversaw a renaissance of Doctor Who in partnership with producer, Barry Letts. A new Doctor, the debonair-and-dandy Jon Pertwee, charmed audiences in colour TV. Because the Doctor was now banished to Earth by the Time Lords, Dicks commissioned stories freeing the Doctor from clambering over unconvincing polystyrene sets depicting alien planets.

Amid Sea Devils, Autons and animated gargoyles disturbing suburbia or sleepy villages, Dicks and Letts devised a new foe called the Master, a brilliant rogue Time Lord like the Doctor, but one committed to ruling the universe rather than saving it. The Doctor had to stop him.

Viewing figures topped ten million again. However, Dicks — an unpretentious and old-fashioned man — grew weary of constantly chivvying people to deliver their scripts. He said: "Writers are erratic characters: lying, treacherous and devious — I knew all the excuses because I'd used them myself."

His final act as script editor in 1974 was to help Letts choose a new Doctor to replace Pertwee. Frontrunners included Graham Crowden, Ron Moody and Jim Dale, but each fell out of contention until there was no shortlist left. In despair and with time running out before shooting the new series, Dicks and Letts ventured out to watch The Golden Voyage of Sinbad and were transfixed by the evil sorcerer Koura, played by Tom Baker. They soon found the eccentric actor working on a building site entertaining his fellow hod carriers with stories about his teenage misadventure as a novice monk. They signed him up.

Dicks left the show soon after, but persuaded his replacement, Robert Holmes, to let him write Baker's opening story, Robot, which introduced Baker's more anarchic, humorous, and unpredictable Doctor — a sort of intergalactic Harpo Marx with a predilection for jelly babies.

Dicks turned many of Baker's adventures into paperbacks for Target Books. He had become unofficial script editor for the publisher that had bought the novel rights to Doctor Who in 1973. However, many of the original scriptwriters he tried to commission said no to novelisations because the money was not as good as for television.

As a result, Dicks acquired a virtual monopoly on writing thee books. Fans, as "Whovians", remember with affection his familiar scene-setting description of Baker emerging from a "wheezing, groaning" Tardis onto a dark alien planet with his "broad-brimmed felt hat crammed on to his chaotic mop of brown curly hair". The original paperbacks with their lurid covers have become collectors' items.

The popularity of Doctor Who declined in the late Seventies — some argued because BBC bosses wanted it to be less scary after the TV morality campaigner Mary Whitehouse (obituary, November 24, 2001) complained that it was encouraging child violence. Dicks's books remained a comforting reminder of when children were properly scared on a Saturday night

Terrance Dicks was born in East Ham in 1935 to William, who worked in a tailor's shop, and Nellie (née Ambler) a waitress. The couple later ran a pub in Forest Gate, east London. Dicks spent much of his childhood in the local library. "My school career," he said, "was, 'Top of the class in English, middle to bottom in everything else.' So there was never any doubt about it." He got into the local grammar school and won a scholarship to study English at Downing College, Cambridge.

After National Service with the Royal Fusiliers, he worked as a copywriter for dog food and shampoo, writing radio plays in his spare time. He went freelance in the mid-1960s. His friend, Malcolm Hulke, had been commissioned to write an episode of The Avengers, but was suffering from writer's block. Dick recalled: "One day he said to me, 'I'm a bit stuck, Terrance, haven't got any ideas, have you?" They went on to co-write two more Avengers episodes and not long afterwards Dicks was appointed scriptwriter for the soap opera Crossroads.

After leaving Doctor Who in 1974, Dicks continued writing scripts for the show. He was enraged when Robert Holmes rewrote The Brain of Morbius, Dicks's gothic fable inspired by Frankenstein in which an evil Time Lord called Morbius is brought back to life in a mutant body. Dicks demanded that his writing credit be removed. When Holmes asked what to put instead Dicks replied, "use a bland pseudonym. When Dicks watched episode one of The Brain of Morbius in January 1976, the opening credits stated "by Robin Bland".

Dicks wrote many other children's stories, such as the Baker Street Irregulars books. He returned to the BBC in the 1980s as script editor on a series of Sunday afternoon adaptations of classic novels, including Oliver Twist, and Vanity Fair, succeeding his old friend Letts as producer in 1985. He continued to attend Doctor Who conventions, but rarely spoke about his cult status to his family, who were unaware of quite how revered he was among fans.

When he was not writing books, Dicks was reading them and could get through one a day. He would arrive home laden with carrier bags stuffed with secondhand paperbacks purchased in the musty bookshops then dotted along Charing Cross Road.

A movie lover, he also stayed up late watching classic film noir at the Hampstead home he shared with his wife Elsa (née Germaney), a teacher he married in 1963. They had first met working summer jobs at Butlin's in Clacton, Essex. She survives him along with their three sons: Stephen, Jonathan and Oliver, who all lead private lives. Two grandchildren also survive him.

Once Dicks finished a book, he did not pine for a new commission. "I used to sit with my feet up and watch television. I didn't have any compulsive urge to write. Someone once said, 'What gives you the urge to write?' And I said 'An advance and a contract.'"

Dicks was pleased to see Doctor Who rebooted in 2005, but unimpressed by the new Doctor's flirtations with his assistants: he insisted the Time Lord should remain as asexual as in the original series. "Should the Doctor be a snogger?" he asked. "Certainly not." Despite his disapproval of their racier interpretations, Dicks was an inspiration to the modern Doctor Who writers, who posted tributes to him. One, Jenny Colgan, wrote: "Terrance Dicks helped more children (especially boys) develop a lifelong love of reading than almost anyone else who's ever lived."

Another, from Robin Shearman, recalled being 14 and interviewing Dicks for a fanzine. Feeling "ashamed" of his speech impediment, Shearman stumbled over his questions. Dicks patiently listened. "The one time he alluded to my stammer, was when I said I wanted to be a writer, just like him. He smiled and said, 'That's the problem we writers have: there are so many words in our heads, it's sometimes hard to get them all out.'

"He called me a writer! And stammer beaten, mostly, I met him at many conventions, but I never got round to telling him I had been so inspired by him. Not only to write, but also not to feel so ashamed of my speech impediment."

Caption: Terrance Dicks in 2015 with Wendy Padbury, who played the Doctor's companion Zoe Heriot in the 1960s, and a Cyberman