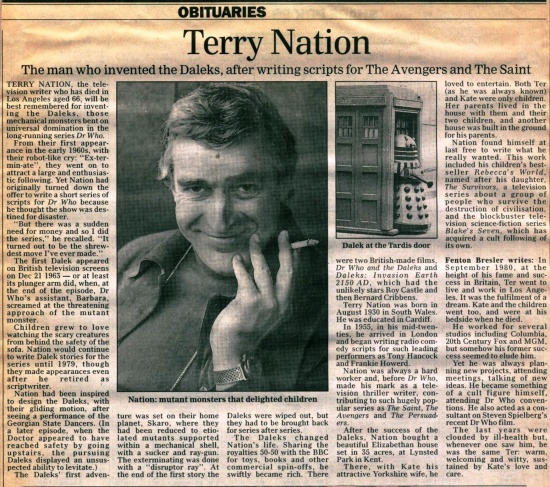 The man who invented the Daleks, after writing scripts for The Avengers and The Saint

TERRY NATION, the television writer who has died in Los Angeles aged 66, will be best remembered for inventing the Daleks, those mechanical monsters bent on universal domination in the long-running series Dr Who.

From their first appearance in the early 1960s, with their robot-like cry: "Ex-ter-min-ate", they went on to attract a large and enthusiastic following. Yet Nation had originally turned down the offer to write a short series of scripts for Dr Who because he thought the show was destined for disaster.

"But there was a sudden need for money and so I did the series," he recalled. "It turned out to be the shrewdest move I've ever made."

The first Dalek appeared on British television screens on Dec 21 1963 — or at least its plunger arm did, when, at the end of the episode, Dr Who's assistant, Barbara, screamed at the threatening approach of the mutant monster.

Children grew to love watching the scary creatures from behind the safety of the sofa. Nation would continue to write Dalek stories for the series until 1979, though they made appearances even after he retired as scriptwriter.

Nation had been inspired to design the Daleks, with their gliding motion, after seeing a performance of the Georgian State Dancers. (In a later episode, when the Doctor appeared to have reached safety by going upstairs, the pursuing Daleks displayed an unsuspected ability to levitate.)

The Daleks' first adventure was set on their home planet, Skaro, where they had been reduced to etiolated mutants supported within a mechanical shell, with a sucker and ray-gun. The exterminating was done with a "disruptor ray". At the end of the first story the Daleks were wiped out, but they had to be brought back for series after series.

The Daleks changed Nation's life. Sharing the royalties 50-50 with the BBC for toys, books and other commercial spin-offs, he swiftly became rich. There were two British-made films, Dr Who and the Daleks and Daleks: Invasion Earth 2150 AD, which had the unlikely stars Roy Castle and then Bernard Cribbens.

Terry Nation was born in August 1930 in South Wales. He was educated in Cardiff.

In 1955, in his mid-twenties, he arrived in London and began writing radio comedy scripts for such leading performers as Tony Hancock and Frankie Howerd.

Nation was always a hard worker and, before Dr Who, made his mark as a television thriller writer, contributing to such hugely popular series as The Saint, The Avengers and The Persuaders.

After the success of the Daleks, Nation bought a beautiful Elizabethan house set in 35 acres, at Lynsted Park in Kent.

There, with Kate his attractive Yorkshire wife, he loved to entertain. Both Ter (as he was always known) and Kate were only children. Her parents lived in the house with them and their two children, and another house was built in the ground for his parents.

Nation found himself at last free to write what he really wanted. This work included his children's bestseller Rebecca's World, named after his daughter, The Survivors, a television series about a group of people who survive the destruction of civilisation, and the blockbuster television science-fiction series Blake's Seven, which has acquired a cult following of its own.

Fenton Bresler writes: In September 1980, at the height of his fame and success in Britain, Ter went to live and work in Los Angeles. It was the fulfilment of a dream. Kate and the children went too, and were at his bedside when he died.

He worked for several studios including Columbia, 20th Century Fox and MGM, but somehow his former success seemed to elude him.

Yet he was always planning new projects, attending meetings, talking of new ideas. He became something of a cult figure himself, attending Dr Who conventions. He also acted as a consultant on Steven Spielberg's recent Dr Who film.

The last years were clouded by ill-health but, whenever one saw him, he was the same Ter: warm, welcoming and witty, sustained by Kate's love and care.

Caption: Dalek at the Tardis door