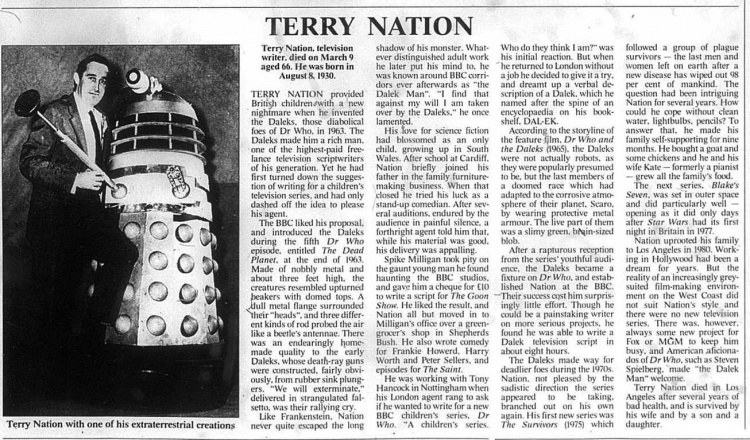 TERRY NATION provided British children with a new nightmare when he invented the Daleks, those diabolical foes of Dr Who, in 1963. The Daleks made him a rich man, one of the highest-paid freelance television scriptwriters of his generation. Yet he had first turned down the suggestion of writing for a children's television series, and had only dashed off the idea to please his agent.

The BBC liked his proposal, and introduced the Daleks during the fifth Dr Who episode, entitled The Dead Planet , at the end of 1963. Made of nobbly metal and about three feet high, the creatures resembled upturned beakers with domed tops. A dull metal flange surrounded their "heads", and three different kinds of rod probed the air like a beetle's antennae. There was an endearingly homemade quality to the early Daleks, whose death-ray guns were constructed, fairly obviously, from rubber sink plungers. "We will exterminate," delivered in strangulated falsetto, was their rallying cry.

Like Frankenstein, Nation never quite escaped the long shadow of his monster. Whatever distinguished adult work he later put his mind to, he was known around BBC corridors ever afterwards as "the Dalek Man". "I find that against my will I am taken over by the Daleks," he once lamented.

His love for science fiction had blossomed as an only child, growing up in South Wales. After school at Cardiff, Nation briefly joined his father in the family furniture-making business. When that closed he tried his luck as a stand-up comedian. After several auditions, endured by the audience in painful silence, a forthright agent told him that, while his material was good, his delivery was appalling.

Spike Milligan took pity on the gaunt young man he found haunting the BBC studios, and gave him a cheque for Pounds 10 to write a script for The Goon Show. He liked the result, and Nation all but moved in to Milligan's office over a greengrocer's shop in Shepherds Bush. He also wrote comedy for Frankie Howerd, Harry Worth and Peter Sellers, and episodes for The Saint .

He was working with Tony Hancock in Nottingham when his London agent rang to ask if he wanted to write for a new BBC children's series, Dr Who . "A children's series. Who do they think I am?" was his initial reaction. But when he returned to London without a job he decided to give it a try, and dreamt up a verbal description of a Dalek, which he named after the spine of an encyclopaedia on his bookshelf, DAL-EK.

According to the storyline of the feature film, Dr Who and the Daleks (1965), the Daleks were not actually robots, as they were popularly presumed to be, but the last members of a doomed race which had adapted to the corrosive atmosphere of their planet, Scaro, by wearing protective metal armour. The live part of them was a slimy green, brain-sized blob.

After a rapturous reception from the series' youthful audience, the Daleks became a fixture on Dr Who , and established Nation at the BBC. Their success cost him surprisingly little effort. Though he could be a painstaking writer on more serious projects, he found he was able to write a Dalek television script in about eight hours.

The Daleks made way for deadlier foes during the 1970s. Nation, not pleased by the sadistic direction the series appeared to be taking, branched out on his own again. His first new series was The Survivors (1975) which followed a group of plague survivors - the last men and women left on earth after a new disease has wiped out 98 per cent of mankind. The question had been intriguing Nation for several years. How could he cope without clean water, lightbulbs, pencils? To answer that, he made his family self-supporting for nine months. He bought a goat and some chickens and he and his wife Kate - formerly a pianist - grew all the family's food.

The next series, Blake's Seven , was set in outer space and did particularly well - opening as it did only days after Star Wars had its first night in Britain in 1977.

Nation uprooted his family to Los Angeles in 1980. Working in Hollywood had been a dream for years. But the reality of an increasingly grey-suited film-making environment on the West Coast did not suit Nation's style and there were no new television series. There was, however, always some new project for Fox or MGM to keep him busy, and American aficionados of Dr Who , such as Steven Spielberg, made "the Dalek Man" welcome.

Terry Nation died in Los Angeles after several years of bad health, and is survived by his wife and by a son and a daughter.

Caption: Terry Nation with one of his extraterrestrial creations