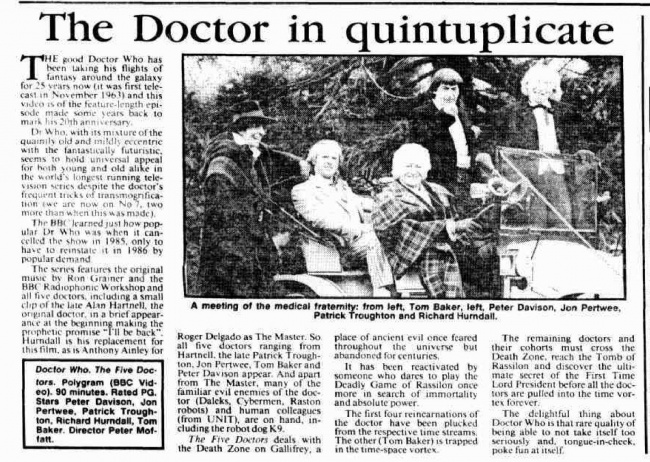 THE good Doctor Who has been taking his flights of fantasy around the galaxy for 25 years now (it was first telecast in November 1963) and this video is of the feature-length episode made some years back to mark his 20th anniversary.

Dr Who, with its mixture of the quaintly old and mildly eccentric with the fantastically futuristic, seems to hold universal appeal for both young and old alike in the world's longest running television series despite the doctor's frequent tricks of transmogrification (we are now on No 7, two more than when this was made).

The BBC learned just how popular Dr Who was when it cancelled the show in 1985, only to have to reinstate it in 1986 by popular demand.

The series features the original music by Ron Grainer and the BBC Radiophonic Workshop and all five doctors, including a small clip of the late Alan Hartnell, the original doctor, in a brief appearance at the beginning making the prophetic promise "I'll be back". Hurndall is his replacement for this film, as is Anthony Ainley for Roger Delgado as The Master. So all five doctors ranging from Hartnell, the late Patrick Troughton,

Jon Pertwee, Tom Baker and Peter Davison appear. And apart from The Master, many of the familiar evil enemies of the doctor (Daleks, Cybermen, Raston robots) and human colleagues (from UNIT), are on hand, including the robot dog K.9.

The Five Doctors deals with the Death Zone on Gallifrey, a place of ancient evil once feared throughout the universe but abandoned for centuries.

It has been reactivated by someone who dares to play the Deadly Game of Rassilon once more in search of immortality and absolute power.

The first four reincarnations of the doctor have been plucked from the respective time streams. The other (Tom Baker) is trapped in the time-space vortex.

The remaining doctors and their cohorts must cross the Death Zone, reach the Tomb of Rassilon and discover the ultimate secret of the First Time Lord President before all the doctors are pulled into the time vortex forever.

The delightful thing about Doctor Who is that rare quality of being able to not take itself too seriously and, tongue-in-cheek, poke fun at itself.