The Doctor is in - again 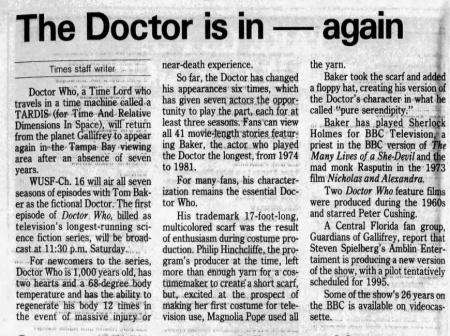 Doctor Who, a Time Lord who travels in a time machine called a TARDIS (for Time And Relative Dimensions In Space), will return from the planet Gallifrey to appear again in the Tampa Bay viewing area after an absence of seven years.

WUSF-Ch. 16 will air all seven seasons of episodes with Tom Baker as the fictional Doctor. The first episode of Doctor Who, billed as television's longest-running science fiction series, will be broadcast at 11:30 p.m. Saturday.

For newcomers to the series, Doctor Who is 1,000 years old, has two hearts and a 68-degree body temperature and has the ability to regenerate his body 12 times in the event of massive injury or near-death experience.

So far, the Doctor has changed his appearances six times, which has given seven actors the opportunity to play the part, each for at least three seasons. Fans can view all 41 movie-length stories featuring Baker, the actor who played the Doctor the longest, from 1974 to 1981.

For many fans, his characterization remains the essential Doctor Who.

His trademark 17-foot-long, multicolored scarf was the result of enthusiasm during costume production. Philip Hinchcliffe, the program's producer at the time, left more than enough yarn for a costumemaker to create a short scarf, but, excited at the prospect of making her first costume for television use, Magnolia Pope used all the yarn.

Baker took the scarf and added a floppy hat, creating his version of the Doctor's character in what he called "pure serendipity."

Baker has played Sherlock Holmes for BBC Television, a priest in the BBC version of The Many Lives of a She-Devil and the mad monk Rasputin in the 1973 film Nicholas and Alexandra.

Two Doctor Who feature films were produced during the 1960s and starred Peter Cushing.

A Central Florida fan group, Guardians of Gallifrey, report that Steven Spielberg's Amblin Entertaiment is producing a new version of the show, with a pilot tentatively scheduled for 1995.

Some of the show's 26 years on the BBC is available on videocassette.