The show they could never exterminate 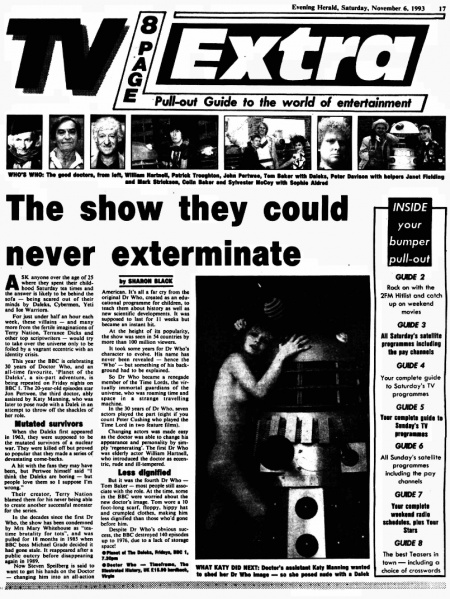 ASK anyone over the age of 25 where they spent their childhood Saturday to times and the answer is likely to be behind the sofa — being scared out of their minds by Daleks, Cybermen, Yeti and Ice Warriors.

For just under half an hour each week, these villains — and many more from the fertile imaginations of Terry Nation. Terrance Dicks and other top scriptwriters — would try to take over the universe only to be foiled by a vagrant eccentric with an identity crisis.

This year the BBC is celebrating 30 years of Doctor Who, and an all-time favourite, 'Planet of the Daleks', a six-part adventure, is being repeated on Friday nights on BBC 1. The 20-year-old episodes star Jon Pertwee, the third doctor, ably assisted by Katy Manning, who was later to pose nude with a Dalek in an attempt to throw off the shackles of her role.

When the Daleks first appeared in 1963, they were supposed to be the mutated survivors of a nuclear war. They were killed off but proved so popular that they made a series of devastating come-backs.

A hit with the fans they may have been, but Pertwee himself said "I think the Daleks are boring — but people love them so I suppose I'm wrong."

Their creator, Terry Nation blamed them for his never being able to create another successful monster for the series.

In the decades since the first Dr Who, the show has been condemned by Mrs Mary Whitehouse as "tea-time brutality for tots", and was pulled for 18 months in 1985 when BBC boss Michael Grade decided it had gone stale. It reappeared after a public outcry before disappearing again in 1989.

Now Steven Speilberg is said to want to get his hands on the Doctor — changing him into an all-action American. It's all a far cry from the original Dr Who, created as an educational programme for children, to teach them about history as well as new scientific developments. It was supposed to last for 11 weeks but became an instant hit.

At the height of its popularity, the show was seen in 54 countries by more than 100 million viewers.

It took some years for Dr Who's character to evolve. His name has never been revealed — hence the 'Who' — but something of his background had to be explained.

So Dr Who became a renegade member of the Time Lords, the virtually immortal guardians of the universe, who was roaming time and space in a strange travelling machine.

In the 30 years of Dr Who, seven actors played the part (eight if you count Peter Cushing who played the Time Lord in two feature films).

Changing actors was made easy as the doctor was able to change his appearance and personality by simply 'regenerating'. The first Dr Who was elderly actor William Hartnell, who introduced the doctor as eccentric, rude and ill-tempered.

But it was the fourth Dr Who — Tom Baker — most people still associate with the role. At the time, some in the BBC were worried about the new doctor's image. Tom wore a 10 foot-long scarf, floppy, hippy hat and crumpled clothes, making him less dignified than those who'd gone before him.

Despite Dr Who's obvious success, the BBC destroyed 140 episodes up to 1976, due to a lack of storage space!

Caption: WHAT KATY DID NEXT: Doctor's assistant Katy Manning wanted to shed her Dr Who image - so she posed nude with a Dalek