This Month on Channel 3 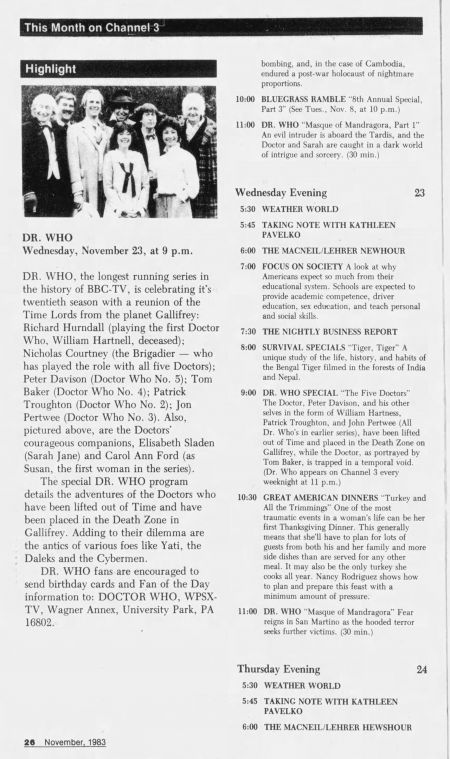 DR. WHO, the longest running series in the history of BBC-TV, is celebrating it's twentieth season with a reunion of the Time Lords from the planet Gallifrey: Richard Hurndall (playing the first Doctor Who, William Hartnell, deceased); Nicholas Courtney (the Brigadier — who has played the role with all five Doctors); Peter Davison (Doctor Who No. 5); Tom Baker (Doctor Who No. 4); Patrick Troughton (Doctor Who No. 2); Jon Pertwee (Doctor Who No. 3). Also, pictured above, are the Doctors' courageous companions, Elisabeth Sladen (Sarah Jane) and Carol Ann Ford (as Susan, the first woman in the series).

The special DR. WHO program details the adventures of the Doctors who have been lifted out of Time and have been placed in the Death Zone in Gallifrey. Adding to their dilemma are the antics of various foes like Yati, the Daleks and the Cybermen.

DR. WHO fans are encouraged to send birthday cards and Fan of the Day information to: DOCTOR WHO, WPSX-TV, Wagner Annex, University Park, PA 16802.

11:00 DR. WHO "Masque of Mandragora, Part 1" An evil intruder is aboard the Tardis, and the Doctor and Sarah are caught in a dark world of intrigue and sorcery. (30 min.)

9:00 DR. WHO SPECIAL "The Five Doctors" The Doctor, Peter Davison, and his other selves in the form of William Hartness, Patrick Troughton, and John Pertwee (All Dr. Who's in earlier series), have been lifted out of Time and placed in the Death Zone on Gallifrey, while the Doctor, as portrayed by Tom Baker, is trapped in a temporal void. (Dr. Who appears on Channel 3 every weeknight at 11 p.m.)