Time Lord has a timely attitude 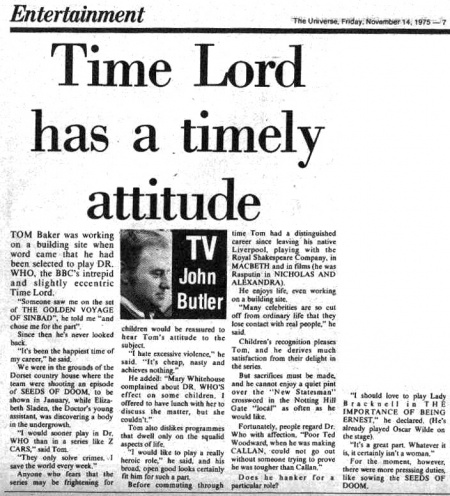 TOM Baker was working on a building site when word came that he had been selected to play DR. WHO, the BBC's intrepid and slightly eccentric Time Lord.

"Someone saw me sin the set of THE GOLDEN VOYAGE OF SINBAD-, he told me "and chose me for the part"

Since then he's never looked back.

"It's been the happiest time of my career," he said.

We were in the grounds of the Dorset country house where the team were shooting an episode of SEEDS OF DOOM, to be shown in January, while Elizabeth Sladen, the Doctor's young assistant, was decorating a body in the undergrowth.

"I would sooner play in Dr. WHO than in a series like Z CARS," said Tom.

"They only solve crimes. I save the world every week." Anyone who fears that the series may be frightening for children would be reassured to hear Tom's attitude to the subject.

"I hate excessive violence," he said "It's cheap, nasty and achieves nothing."

complained about DR. WHO'S effect on some children, I offered to have lunch with her to discuss the matter, but she couldn't."

Tom also dislikes programmes that dwell only on the squalid aspects of life.

"I would like to play a really heroic role," he said, and his broad, open good looks certainly fit him for such a part.

Before commuting through time TOM had a distinguished career since keying his native Liverpool. playing with the Royal Shakespeare Company, in MACBETH and In films the was Rasputin in NICHOLAS AND ALEXANDRA).

He enjoys life, evert working on a building site.

"Many celebrities are so cut off from ordinary life that they lose contact with real people,- he said

Children's recognition pleases Tom, and he derives much satisfaction from their delight in the series

But sacrifices must be made, and he cannot enjoy a quiet pint over the "New Statesman" crossword in the Notting Hill Gate "local" as often as he would like.

Fortunately, people regard Dr. Who with affection. "Poor red Woodward, when he was making (CALLAN, could not go out without someone trying to prove he was tougher than Callan.

Does he hanker for a particular role?

"I should love to play Lady Bracknell in THE IMPORTANCE OF BEING ERNEST," he declared. (He's already played Oscar Wilde on the stage)

"It's a great part. Whatever is, it certainly isn't a woman."

For the moment, however, there were more pressing duties, like sowing the SEEDS OF DOOM.