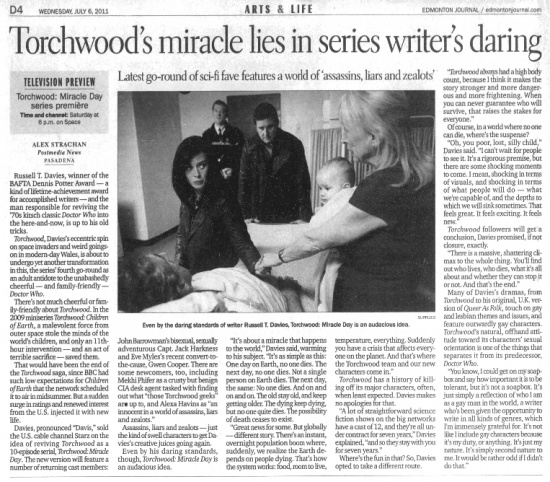 Russell T. Davies, winner of the BAFTA Dennis Potter Award — a kind of lifetime-achievement award for accomplished writers—and the man responsible for reviving the 70s kitsch classic Doctor Who into the here-and-now, is up to his old tricks.

Torchwood, Davies's eccentric spin on space invaders and weird goings-on in modem-day Wales, is about to undergo yet another transformation in this, the series' fourth go-round as an adult antidote to the unabashedly cheerful — and family-friendly — Doctor Who.

There's not much cheerful or lam. fly-friendly about Torchwood. In the 2009 miniseries Torchwood: Children of Earth, a malevolent force from outer space stole the minds of the world's children, and only an 11th-hour intervention — and an act of terrible sacrifice— saved them. That would have been the end of the Torchwood saga, since BBC had such low expectations for Children of Earth that the network scheduled it to air in midsummer. But a sudden surge in ratings and renewed interest from the U.S. injected it with new life.

Davies, pronounced "Davis," sold the U.S. cable channel Starz on the idea of reviving Torchwood as a 10 episode serial, Torchwood: Miracle Day. The new version will feature a number of returning cast members: John Barrowman's bisexual, sexually adventurous Capt. Jack Harkness and Eve Myles's recent convert-to-the-cause, Gwen Cooper. There are some newcomers, too, including Mekhi Phifer as a crusty but benign CIA desk agent tasked with finding out what "those Torchwood geeks" are up to, and Alexa Havins as "an an innocent in a world of assassins, liars and zealots."

Assassins, liars and zealots—just the kind of swell characters to get Davies's creative juices going again. Even by his daring standards, though, Torchwood: Miracle Day is an audacious idea.

"Great news for some. But globally — different story. There's an instant, overnight population boom where, suddenly, we realize the Earth depends on people dying. That's how the system works: food, mom to live, temperature, everything. Suddenly you have a crisis that affects everyone on the planet. And Mat's where the Torchwood team and our new characters come in."

Torchwood has a history of killing off its major characters, often, when least expected. Davies makes no apologies for that.

"A lot of straightforward science fiction shows on the big networks have a cast of 12, and they're all under contract for seven years," Davies explained, "and m they stay with you for seven years."

Where's the fun in that? So, Davies opted to take a different route.

"Torchwood always had a high body count, because I think it makes the story stronger and more dangerous and more frightening. When you can never guarantee who will survive, that raises the stakes for everyone."

Of course, in a world where no one candle, where's the suspense? "Oh, you poor, lost, silly child," Davies said. "I can't wait for people to see it. It's a rigorous premise, but there are some shocking moments to come. I mean, shocking in terms of visuals, and shocking in terms of what people will do — what we're capable of, and the depths to which we will sink sometimes. That feels great. It feels exciting. It feels

Torchwood followers will get a conclusion, Davies promised, if not closure, exactly.

"There is a massive, shattering climax to the whole thing. You'll find out who lives, who dies, what ifs all about and whether they can stop it or not. And that's the end."

Many of Davies's dramas, from Torchwood to his original, U.K version of Queer As Folk, touch on gay and lesbian themes and issues, and feature outwardly gay characters. Torchwood's natural, offhand attitude toward its characters' sexual orientation is one of the things that separates it from its predecessor, Doctor Who.

"You know, I could get on my soapbox and say how important itis to be tolerant, but it's not a soapbox. It's just simply a reflection of who I am as a gay man in the world, a writer who's been given the opportunity to write in all kinds of genres, which I'm immensely grateful for. les not file I include gay characters because it's my duty, or anything. les just my nature. It's simply second nature to me. It would be rather odd if I didn't do that."