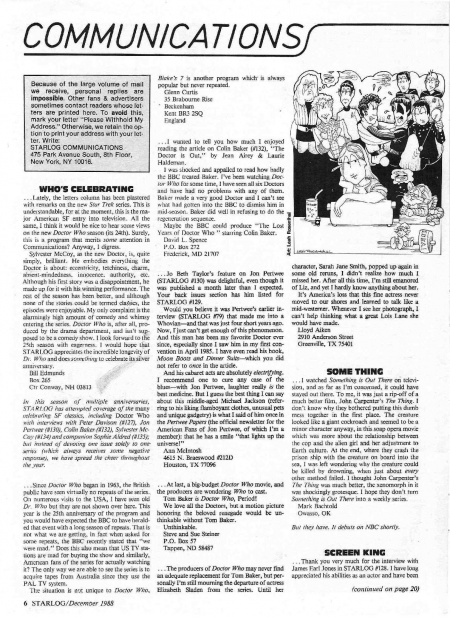 ... Lately, the letters column has been plastered with remarks on the new Star Trek series. This is understandable, for at the moment, this is the major American SF entry into television. All the same, I think it would be nice to hear some views on the new Doctor Who season (its 24th). Surely, this is a program that merits some attention in Communications? Anyway, 1 digress.

Sylvester McCoy, as the new Doctor, is, quite simply, brilliant. He embodies everything the Doctor is about: eccentricity, tetchiness, charm, absent-mindedness. innocence. authority, etc. Although his first story was a disappointment, he made up for it with his winning performance. The rest of the season has been better, and although none of the stories could be termed classics, the episodes were enjoyable. My only complaint is the alarmingly high amount of comedy and whimsy entering the series. Doctor Who is, after all, produced by the drama department, and isn't supposed to be a comedy show. I look forward to the 25th season with eagerness. I would hope that STARLOG appreciates the incredible longevity of Dr. Who and does something to celebrate its silver anniversary.

In this season of multiple anniversaries, STARLOG has attempted coverage of the many celebrating SF classics, including Doctor Who with interviews with Peter Davison (#127), Jon Pertwee (#130), Colin Baker (#132), Sylvester McCoy (#134) and companion Sophie Aldred (#135); but instead of devoting one issue solely to one series (which always receives some negative response), we have spread the cheer throughout the year.

...Since Doctor Who began in 1963, the British public have seen virtually no repeats of the series. On numerous visits to the USA, I have seen old Dr. Who but they are not shown over here. This year is the 25th anniversary of the program and you would have expected the BBC to have heralded that event with a long season of repeats. That is not what we are getting, in fact when asked for some repeats, the BBC recently stated that "we were mad." Does this also mean that US TV stations are mad for buying the show and similarly, American fans of the series for actually watching it? The only way we are able to see the series is to acquire tapes from Australia since they use the PAL TV system.

The situation is not unique to Doctor Who, Blake's 7 is another program which. is always popular but never repeated.

...I wanted to tell you how much I enjoyed reading the article on Colin Baker (#132), "The Doctor is Out," by Jean Airey & Laurie Haldemann was shocked and appalled to read how badly the BBC treated Baker. I've been watching Doctor Who for some time, I have seen all six Doctors and have had no problems with any of them. Baker made a very good Doctor and I can't see what had gotten into the BBC to dismiss him in mid-season. Baker did well in refusing to do the regeneration sequence.

Maybe the BBC could produce "The Lost Years of Doctor Who " starring Colin Baker.

... Jo Beth Taylor's feature on Jon Pertwee (STARLOG #130) was delightful, even though it was published a month later than I expected. Your back issues section has him listed for STARLOG #129.

Would you believe it was Pertwee's earlier interview (STARLOG #79) that made me into a Whovian—and that was just four short years ago. Now, T just can't get enough of this phenomenon. And this man has been my favorite Doctor ever since, especially since I saw him in my first convention in April 1985. I have even read his book, Moon Boots and Dinner Suits—which you did not refer to once in the article.

And his cabaret acts are absolutely electrifying. I recommend one to cure any case of the blues—with Jon Pertwee, laughter really is the best medicine. But I guess the best thing I can say about this middle-aged Michael Jackson (referring to his liking flamboyant clothes, unusual pets and unique gadgetry) is what I said of him once in the Pertwee Papers (the official newsletter for the American Fans of Jon Pertwee, of which I'm a member): that he has a smile "that lights up the universe!"

...At last, a big-budget Doctor Who movie, and the producers are wondering Who to cast.

Tom Baker is Doctor Who, Period!

We love all the Doctors, but a motion picture honoring the beloved renegade would be unthinkable without Tom Baker.

...The producers of Doctor Who may never find an adequate replacement for Tom Baker, but personally I'm still mourning the departure of actress Elizabeth Sladen from the series. Until her character, Sarah Jane Smith, popped up again in some old reruns, I didn't realize how much I missed her. After all this time. I'm still emanored of Liz, and yet I hardly know anything about her.

It's America's loss that this fine actress never moved to our shores and learned to talk like a mid-westerner. Whenever I see her photograph, I can't help thinking what a great Lois Lane she would have made.