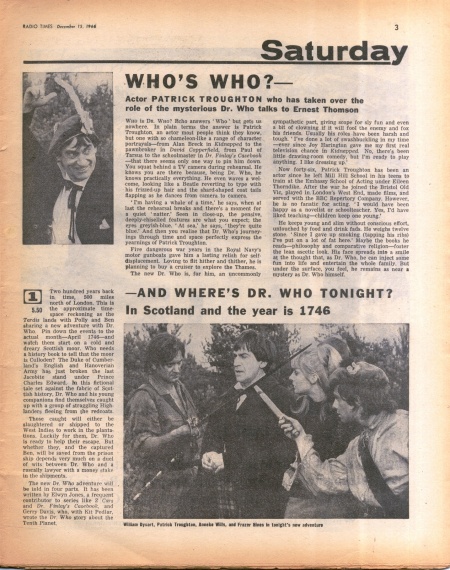 Actor PATRICK TROUGHTON who has taken over the role of the mysterious Dr. Who talks to Ernest Thomson

WHO is DR. WHO? Echo answers 'Who' but gets us nowhere. In plain terms the answer is Patrick Troughton, an actor most people think they know, but one with so chameleon-like a range of character portrayals—from Alan Breck in Kidnapped to the pawnbroker in David Copperfield, from Paul of Tarsus to the schoolmaster in Dr. Finlay's Casebook —that there seems only one way to pin him down. You squat behind a TV camera during rehearsal. He knows you are there because, being Dr. Who, he knows practically everything. He even waves a welcome, looking like a Beatle reverting to type with his frizzed-up hair and the shard-shaped coat tails flapping as he dances from camera to camera.

'I'm having a whale of a time,' he says, when at last the rehearsal breaks and there's a moment for a quiet natter.' Seen in close-up, the pensive, deeply-chiselled features are what you expect; the eyes greyish-blue. 'At sea,' he says, 'they're quite blue.' And then you realise that Dr. Who's journey-ings through time and space perfectly express the yearnings of Patrick Troughton.

Five dangerous war years in the Royal Navy's motor gunboats gave him a lasting relish for self-displacement. Loving to flit hither and thither, he is planning to buy a cruiser to explore the Thames.

The new Dr. Who is, for him, an uncommonly sympathetic part, giving scope for sly fun and even a bit of clowning if it will fool the enemy and fox his friends. Usually his roles have been harsh and tough. ' I've done a lot of swashbuckling in my time —ever since Joy Harington gave me my first real television chance in Kidnapped. No, there's been little drawing-room comedy, but I'm ready to play anything. I like dressing up.'

Now forty-six, Patrick Troughton has been an actor since he left Mill Hill School in his teens to train at the Embassy School of Acting under Eileen Thorndike. After the war he joined the Bristol Old Vic, played in London's West End, made films, and served with the BBC Repertory Company. However, he is no fanatic for acting. I would have been happy as a novelist or schoolteacher. Yes, I'd have liked teaching—children keep one young.'

He keeps young and slim without conscious effort, untouched by food and drink fads. He weighs twelve stone. Since I gave up smoking (tapping his ribs) I've put on a lot of fat here.' Maybe the books he reads—philosophy and comparative religion—foster the lean ascetic look. His face spreads into a smile at the thought that, as Dr. Who, he can inject some fun into life and entertain the whole family. But under the surface, you feel, he remains as near mystery as Dr. Who himself.

-AND WHERE'S DR. WHO TONIGHT?

Two hundred years back in time, 500 miles north of London. This is the the approximate time-space reckoning as the Tardis lands with Polly and Ben sharing a new adventure with Dr. Who. Pin down the events to the actual month—April 1746—and watch them start on a cold and dreary Scottish moor. Who needs a history book to tell that the moor is Culloden? The Duke of Cumberland's English and Hanoverian Army has just broken the last Jacobite stand under Prince Charles Edward. In this fictional tale set against the fabric of Scottish history, Dr. Who and his young companions find themselves caught up with a group of straggling Highlanders fleeing from the redcoats.

Those caught will either be slaughtered or shipped to the West Indies to work in the plantations. Luckily for them, Dr. Who is ready to help their escape. But whether they, and the captured Ben, will be saved from the prison ship depends very much on a duel of wits between Dr. Who and a rascally lawyer with a money stake in the shipments.

The new Dr. Who adventure will be told in four parts. It has been written by Elwyn Jones, a frequent contributor to series like Z Cars and Dr. Finlay's Casebook, and Gerry Davis, who, with Kit Pedlar, wrote the Dr. Who story about the Tenth Planet.