Who's Who? (The Listener) 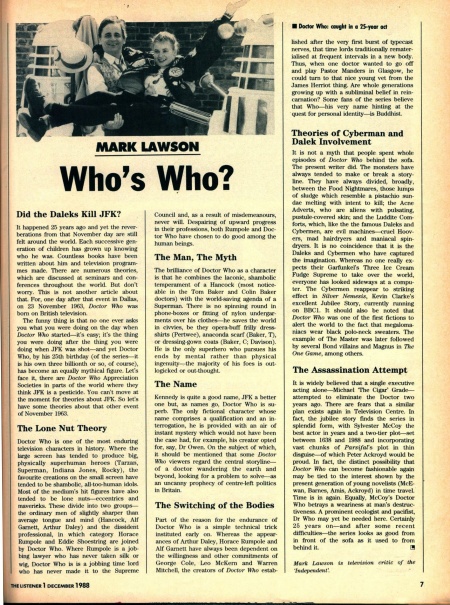 Did the Daleks Kill JFK?

It happened 25 years ago and yet the reverberations from that November day are still felt around the world. Each successive generation of children has grown up knowing who he was. Countless books have been written about him and television programmes made. There are numerous theories, which are discussed at seminars and conferences throughout the world. But don't worry. This is not another article about that. For, one day after that event in Dallas, on 23 November 1963, Doctor Who was born on British television.

The funny thing is that no one ever asks you what you were doing on the day when Doctor Who started—it's easy; it's the thing you were doing after the thing you were doing when JFK was shot—and yet Doctor Who, by his 25th birthday (of the series—it is his own three billionth or so, of course), has become an equally mythical figure. Let's face it, there are Doctor Who Appreciation Societies in parts of the world where they think JFK is a pesticide. You can't move at the moment for theories about JFK. So let's have some theories about that other event of November 1963.

Doctor Who is one of the most enduring television characters in history. Where the large screen has tended to produce big, physically superhuman heroes (Tarzan, Superman, Indiana Jones, Rocky), the favourite creations on the small screen have tended to be shambolic, all-too-human idols. Most of the medium's hit figures have also tended to be lone nuts—eccentrics and mavericks. These divide into two groups—the ordinary men of slightly sharper than average tongue and mind (Hancock, Alf Garnett, Arthur Daley) and the dissident professional, in which category Horace Rumpole and Eddie Shoestring are joined by Doctor Who. Where Rumpole is a jobbing lawyer who has never taken silk or wig, Doctor Who is is a jobbing time lord who has never made it to the Supreme Council and, as a result of misdemeanours, never will. Despairing of upward progress in their professions, both Rumpole and Doctor Who have chosen to do good among the human beings.

The Man, The Myth

The brilliance of Doctor Who as a character is that he combines the laconic, shambolic temperament of a Hancock (most noticeable in the Tom Baker and Colin Baker doctors) with the world-saving agenda of a Superman. There is no spinning round in phone-boxes or fitting of nylon undergarments over his clothes—he saves the world in civvies, be they opera-buff frilly dress-shirts (Pertwee), anaconda scarf (Baker, T), or dressing-gown coats (Baker, C; Davison). He is the only superhero who pursues his ends by mental rather than physical ingenuity--the majority of his foes is out-logicked or out-thought.

Kennedy is quite a good name, JFK a better one but, as names go, Doctor Who is superb. The only fictional character whose name comprises a qualification and an interrogation, he is provided with an air of instant mystery which would not have been the case had, for example, his creator opted for, say, Dr Owen. On the subject of which, it should be mentioned that some Doctor Who viewers regard the central storyline—of a doctor wandering the earth and beyond, looking for a problem to solve—as an uncanny prophecy of centre-left politics in Britain.

The Switching of the Bodies

Part of the reason for the endurance of Doctor Who is a simple technical trick instituted early on. Whereas the appearances of Arthur Daley, Horace Rumpole and Alf Garnett have always been dependent on the willingness and other commitments of George Cole, Leo McKern and Warren Mitchell, the creators of Doctor Who established after the very first burst of typecast nerves, that time lords traditionally rematerialised at frequent intervals in a new body. Thus, when one doctor wanted to go off and play Pastor Manders in Glasgow, he could turn to that nice young vet from the James Herriot thing. Are whole generations growing up with a subliminal belief in reincarnation? Some fans of the series believe that Who—his very name hinting at the quest for personal identity—is Buddhist.

Theories of Cyberman and Dalek Involvement

It is not a myth that people spent whole episodes of Doctor Who behind the sofa. The present writer did. The monsters have always tended to make or break a story-line. They have always divided, broadly, between the Food Nightmares, those lumps of sludge which resemble a pistachio sundae melting with intent to kill; the Acne Adverts, who are aliens with pulsating, pustule-covered skin; and the Luddite Comforts, which, like the the famous Daleks and Cybermen, are evil machines—cruel Hoovers, mad hairdryers and maniacal spin-dryers. It is no coincidence that it is the Daleks and Cybermen who have captured the imagination. Whereas no one really expects their Garfunkel's Three Ice Cream Fudge Supreme to take over the world, everyone has looked sideways at a computer. The Cybermen reappear to striking effect in Silver Nemesis, Kevin Clarke's excellent Jubilee Story, currently running on BBC1. It should also be noted that Doctor Who was one of the first fictions to alert the world to the fact that megalomaniacs wear black polo-neck sweaters. The example of The Master was later followed by several Bond villains and Magnus in The One Game, among others.

It is widely believed that a single executive acting alone—Michael 'The Cigar' Grade—attempted to eliminate the Doctor two years ago. There are fears that a similar plan exists again in Television Centre. In fact, the jubilee story finds the series in splendid form, with Sylvester McCoy the best actor in years and a two-tier plot—set between 1638 and 1988 and incorporating vast chunks of Parsifal's plot in thin disguise—of which Peter Ackroyd would be proud. In fact, the distinct possibility that Doctor Who can become fashionable again may be tied to the interest shown by the present generation of young novelists (McEwan, Barnes, Amis, Ackroyd) in time travel. Time is in again. Equally, McCoy's Doctor Who betrays a weariness at man's destructiveness. A prominent ecologist and pacifist, Dr Who may yet be needed here. Certainly 25 years on—and after some recent difficulties—the series looks as good from in front of the sofa as it used to from behind it.

Mark Lawson is television critic of the 'Independent'.

Caption: Doctor Who: caught in a 25-year act