Who's back, but no Trek 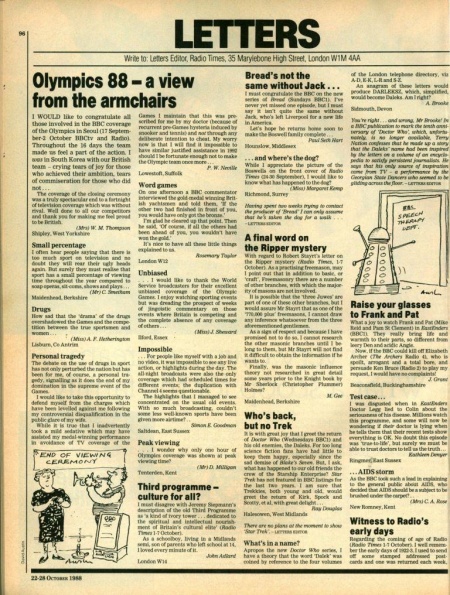 Who's back, but no Trek

It is with great joy that I greet the return of Doctor Who (Wednesdays BBC1) and his old enemies, the Daleks. For too long science fiction fans have had little to keep them happy, especially since the sad demise of Blake's Seven. But, I ask, what has happened to our old friends the crew of the Starship Enterprise? Star Trek has not featured in BBC listings for the last two years. I am sure that Trekkies, both young and old, would greet the return of Kirk, Spock and Scotty, et al, with great delight ...

There are no plans at the moment to show 'Star Trek. - LETTERS EDITOR

What's in a name?

Apropos the new Doctor Who series, have a theory that the word 'Dalek' was coined by reference to the four volumes of the London telephone directory, viz A-D, E-K, L-R and S-Z.

An anagram of these letters would produce DARLEKSZ, which, simplified, would become Daleks. Am I right?

You're right ... and wrong, Mr Brooke! In a BBC publication to mark the tenth anniversary of 'Doctor Who, which, unfortunately, is no longer available, Terry Nation confesses that he made up a story that the Daleks' name had been inspires by the letters on a volume of an encyclopedia to satisfy persistent journalists. He says that his only source of inspiration came from TV - a performance by the Georgian State Dancers who seemed to be gliding across the floor. - LETTERS EDITOR