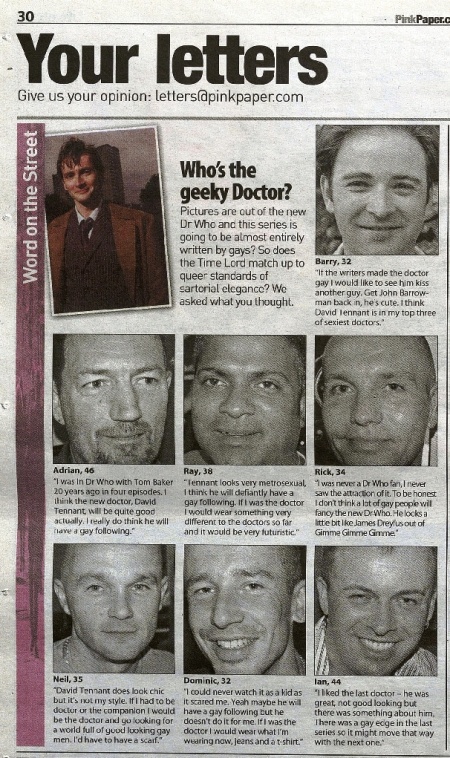 Pictures are out of the new Dr Who and this series is going to be almost entirely written by gays? So does the Time Lord match up to queer standards of sartorial elegance? We asked what you thought.

"If the writers made the doctor gay I would like to see him kiss another guy. Get John Barrow-man back in, he's cute. I think David Tennant is in my top three of sexiest doctors."

"I was in Dr Who with Tom Baker 20 years ago in four episodes. I think the new doctor, David Tennant, will be quite good actually. I really do think he will have a gay following."

"David Tennant does look chic but it's not my style. If I had to be doctor or the companion I would be the doctor and go looking for a world full of good looking gay men. I'd have to have a scarf."

"Tennant looks very metrosexual, I think he will defiantly have a gay following. If I was the doctor I would wear something very different to the doctors so far and it would be very futuristic"

"I could never watch it as a kid as it scared me. Yeah maybe he will have a gay following but he doesn't do it for me. If I was the doctor I would wear what I'm wearing now, Jeans and a t-shirt."

"I was never a Dr Who fan, I never saw the attraction of it. To be honest I don't think a lot of gay people will fancy the new Dr-Who. He looks a little bit like James Dreyfus out of Gimme Gimme Gimme"

'I liked the last doctor — he was great, not good looking but there was something about him. There was a gay edge in the last series so it might move that way with the next one."