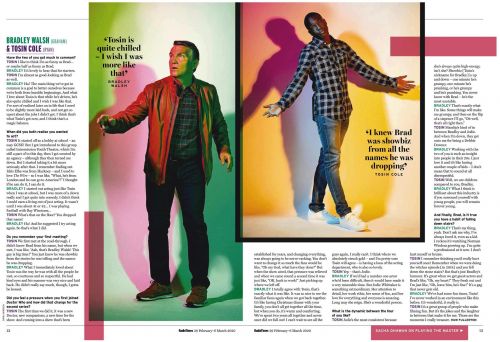 Have the two of you got much in common?

BRADLEY It's lovely to hear that for starters.

TOSIN I'm almost as good-looking as Brad as well.

BRADLEY Ha! The main thing we've got in common is a goal to better ourselves because we're both from humble beginnings. And what I love about Tosin is that while he's driven, he's also quite chilled and I wish I was like that. I've sort of realised later on in life that I need to be slightly more laid back, and not get so upset about the jobs I didn't get. I think that's what Tosin's got now, and I think that's a magic balance.

When did you both realise you wanted to act?

TOSIN It started off as a hobby at school - an easy GCSE! But I got introduced to this group called Intermission Youth Theatre, which I'm still a part of to this day, then I got scouted by an agency - although they then turned me down. But I started taking it a bit more seriously after that. I remember finding out Idris Elba was from Hackney - and I used to love The Wire - so I was like, "What, he's from London and he can go to America?!" I thought if he can do it, I can do it.

BRADLEY I started out acting just like Tosin when I was at school, but I was more of a clown really and I got quite into comedy. I didn't think I could earn a living out of just acting. It wasn't until I was about 41 or 42... I was playing football with Ray Winstone...

TOSIN What's that on the floor? You dropped that name!

BRADLEY Ha! And he suggested I try acting again. So that's what I did.

Do you remember your first meeting?

TOSIN We first met at the read-through. I didn't know Brad from his name, but when we met, I was like, "Aah, that's Bradley Walsh! This guy is big time!" You just knew he was showbiz from the stories he was telling and the names he was dropping.

BRADLEY What I immediately loved about Tosin was the way he was with all the people he met, so courteous and so respectful. He had kind eyes and his manner was very nice and laid back. He didn't really say much, though, I gotta be honest.

Did you feel a pressure when you first joined Doctor Who and how did that change for the second series?

TOSIN The first time we did it, it was a new Doctor, new companions, a new time for the show. And coming into a show that's been established for years, and changing everything, was always going to be nerve-racking. You don't want to change it so much the fans would be like, "Oh my God, what have they done?" But when the show aired, that pressure was relieved and when we came round a second time it was just like, "OK, back to work!" Just picking up where we left off.

BRADLEY I totally agree with Tosin, that's exactly what it was like. It was so nice to see the familiar faces again when we got back together. It's like having Christmas dinner with your family, you don't all get together all the time, but when you do, it's warm and comforting. We've spent two years all together and never once did we fall out! I can't wait to see all the guys again, I really can't. I think where we absolutely struck gold - and I'm pretty sure Tosin will agree - is having a boss of the acting department, who is also so lovely.

BRADLEY If we'd had a number one actor who'd been difficult, then it would have made it a very miserable time. But Jodie Whittaker is something extraordinary. Her attention to detail, her work ethic, her sense of fun, and her love for everything and everyone is amazing. Long may she reign. She's a wonderful person.

What is the dynamic between the four of you like?

BRADLEY That's exactly what I'm like. Some things will make me grumpy, and then on the flip of a sixpence I'll go, "Oh well, that's all right then."

TOSIN Mandip's kind of in between Bradley and Jodie. And when I'm down, they get onto me for being a Debbie Downer.

BRADLEY Working with the two of you is such an insight into people in their 20s. I just love it and it's like having another couple of kids - I don't mean that to sound at all disrespectful.

TOSIN Well, we are children compared to you, Bradley.

BRADLEY What I think is brilliant about this industry is if you surround yourself with young people, you will remain forever young.

And finally, Brad, is it true you have a habit of falling down stairs?

BRADLEY That's my thing, yeah. Don't ask me why, I've always loved it, even as a kid. I reckon it's watching Norman Wisdom growing up. I'm quite a professional at it now. I don't hurt myself or bruise.

TOSIN I remember thinking you'd really hurt yourself once! Remember when we were doing the witches episode [in 2018] and you fell down the stone stairs? But that's just Bradley's humour. It's great when we get guest actors and Brad's like, "Oh, my heart!" They freak out and I'm just like, "Oh, leave him, he's fine!" It's a gag that never gets old.

BRADLEY We've had some fun times, Tosin! I've never worked in an environment like this before. It's wonderful, it really is.

TOSIN It's a great group of people who make filming fun. But it's the jokes and the laughter in between that make it for me. Those are the moments I really treasure.

SACHA DHAWAN ON PLAYING THE MASTER ►