Win a great Dr. Who Game 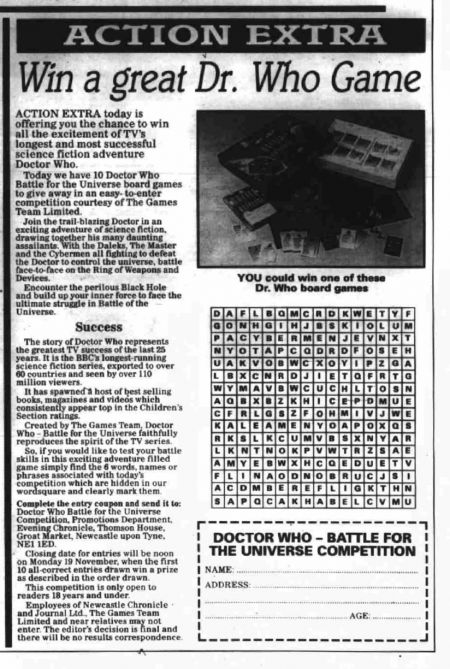 ACTION EXTRA today is offering you the chance to win all the excitement of TV's longest and most successful science flctlon adventure Doctor Who.

Today we have 10 Doctor Who Battle for the Universe board games to give away in an easy- to-enter competition courtesy of The Games Team Limited.

Join the trail-blaring Doctor in an exciting adventure of science fiction, drawing together his many daunting assailants. With the Daleks, The Master and the Cybermen all fighting to defeat the Doctor to control the universe, battle faceto.face on the Ring or Weapons and Devices.

Encounter the perilous Black Hole and build up your inner force to face the ultimate struggle in Battle of the Universe.

The story of Doctor Who represents the greatest TV success of the last years. It is the BBC's longest-running science fiction series, exported to over 60 countries and seen by over 110 million viewers. It has spawned-1 host of hest selling books. maiines and videos which consistent appear top in the Children's Section ratings.

Created by The Games Team, Doctor Who - Battle for the Universe faithhilly reproduces the spirit of the TV series.

So, if you would like to test your battle skills in this exciting adventure filled game simply find the 6 words, names or phrases associated with today's competition which are hidden in our wordsquare and clearly mark them.

Closing date for entries will be noon on Monday 19 November. when the first 10 all-correct entries drawn win a prize as described in the order drawn.

This competition is only open to readers 19 years and under

Employees of Newcastle Chronicle and Journal Ltd., The Games Team Limited end near relatives may not enter. The editor's decision is final and there will be no results correspondence