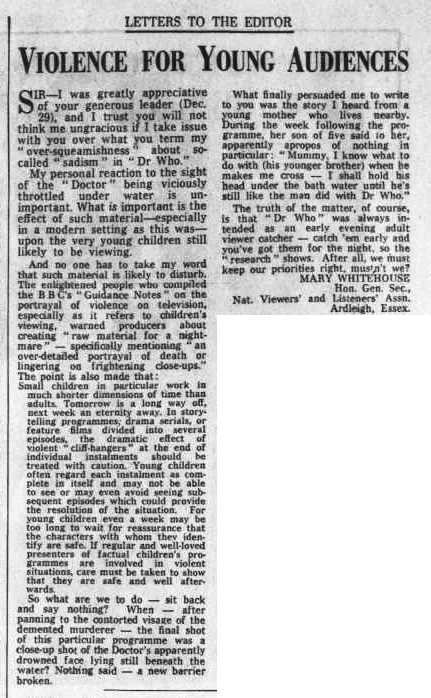 Sir-- I was greatly appreciative of your generous leader (Dec. 29), and I trust you will not think me ungracious if I take issue with you over what you term my "over-squeamishness" about so-called "sadism" in "Dr. Who."

My personal reaction to the site of the "Doctor" being viciously throttled underwater is unimportant. What is important is the effect of such material-- especially in a modern setting as this one was-- upon the very young children still likely to be viewing.

And no one has to take my word that such material is likely to disturb. The enlightened people who compiled the BBC's "Guidance Notes" on the portrayal of violence on television, especially as it refers to children's viewings, warned producers of about creating "raw material for a nightmare" -- specifically mentioning an over-detailed portrayal of death or lingering on frightening close-ups. The point is also made that:

Small children in particular work in much shorter dimensions of time that adults. Tomorrow is a long way off, next week and eternity away. In storytelling programmes, drama serials, or feature films divided into several episodes, the dramatic effect of violent "cliff-hangers" should be treated with caution. Young children often regarded each installment and complete in itself and may not be able to see or may even avoid seeing subsequent episodes which could provide the resolutions of the situation. For young children even a week may be too long to wait for reassurance that the characters with whom they identify are safe. If regular and well-loved presenters of factual children's programmes are involved in violent situations, care must be taken to show that they are safe and well afterwards.

So what are we to do-- sit back and say nothing? When-- after panning to the contorted visage of the demented murderer-- the final shot of this particular program was a close-up shot of the doctor's a apparently drowned face lying still beneath the water? Nothing said -- a new barrier broken.

What finally persuaded me to write to you was the story I heard from a young mother who lives nearby. During the week following the programme, her son of five said to her, apparently apropos of nothing in particular: "Mummy, I know what to do with (his younger brother) when he makes me cross. I shall hold his head under the bath until he's still like the man did with Dr. Who."

The truth of the matter, of course, is that "Dr. Who" was always intended as an early evening adult viewer catcher-- catch 'em early and you've got them for the night, so the "research" shows. After all, we must keep our priorities right, mustn't we?