Doctor Who: funny he never married ... 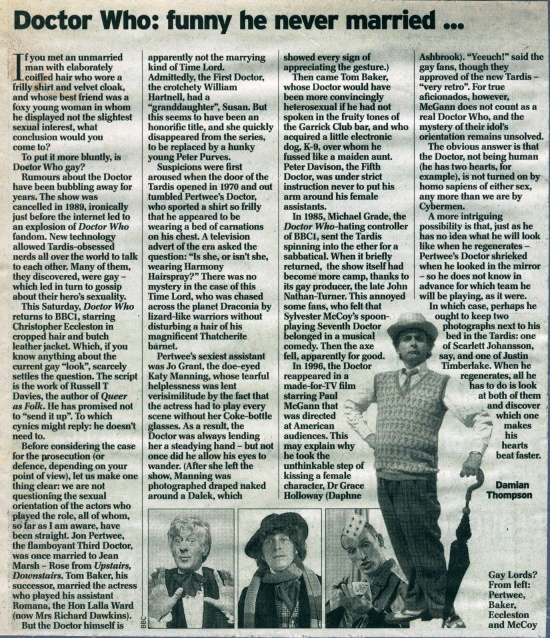 If you met an unmarried man with elaborately coiffed hair who wore a frilly shirt and velvet cloak, and whose best friend was a foxy young woman in whom he displayed not the slightest sexual interest, what conclusion would you come to?

To put it more bluntly, is Doctor Who gay?

Rumours about the Doctor have been bubbling away for years. The show was cancelled in 1989, ironically just before the internet led to an explosion of Doctor Who fandom. New technology allowed Tardis-obsessed nerds all over the world to talk to each other. Many of them, they discovered, were gay - which led in turn to gossip about their hero's sexuality.

This Saturday, Doctor Who returns to BBC1, starring Christopher Eccleston in cropped hair and butch leather jacket. Which, if you know anything about the current gay "look", scarcely settles the question. The script is the work of Russell T Davies, the author of Queer as Folk. He has promised not to "send it up". To which cynics might reply: he doesn't need to.

Before considering the case for the prosecution (or defence, depending on your point of view), let us make one thing clear: we are not questioning the sexual orientation of the actors who played the role, all of whom, so far as I am aware, have been straight. Jon Pertwee, the flamboyant Third Doctor, was once married to Jean Marsh - Rose from Upstairs, Downstairs. Tom Baker, his successor, married the actress who played his assistant Romana, the Hon Lalla Ward (now Mrs Richard Dawkins).

But the Doctor himself is apparently not the marrying kind of Time Lord. Admittedly, the First Doctor, the crotchety William Hartnell, had a "granddaughter", Susan. But this seems to have been an honorific title, and she quickly disappeared from the series, to be replaced by a hunky young Peter Purves.

Suspicions were first aroused when the door of the Tardis opened in 1970 and out tumbled Pertwee's Doctor, who sported a shirt so frilly that he appeared to be wearing a bed of carnations on his chest. A television advert of the era asked the question: "Is she, or isn't she, wearing Harmony Hairspray?" There was no mystery in the case of this Time Lord, who was chased across the planet Draconia by lizard-like warriors without disturbing a hair of his magnificent Thatcherite barnet.

Pertwee's sexiest assistant was Jo Grant, the doe-eyed Katy Manning, whose tearful helplessness was lent verisimilitude by the fact that the actress had to play every scene without her Coke-bottle glasses. As a result, the Doctor was always lending her a steadying hand - but not once did he allow his eyes to wander. (After she left the show, Manning was photographed draped naked around a Dalek, which showed every sign of appreciating the gesture.)

Then came Tom Baker, whose Doctor would have been more convincingly heterosexual if he had not spoken in the fruity tones of the Garrick Club bar, and who acquired a little electronic dog, K-9, over whom he fussed like a maiden aunt. Peter Davison, the Fifth Doctor, was under strict instruction never to put his arm around his female assistants.

In 1985, Michael Grade, the Doctor Who-hating controller of BBC1, sent the Tardis spinning into the ether for a sabbatical. When it briefly returned, the show itself had become more camp, thanks to its gay producer, the late John Nathan-Turner. This annoyed some fans, who felt that Sylvester McCoy's spoon-playing Seventh Doctor belonged in a musical comedy. Then the axe fell, apparently for good.

In 1996, the Doctor reappeared in a made-for-TV film starring Paul McGann that was directed at American audiences. This may explain why he took the unthinkable step of kissing a female character, Dr Grace Holloway (Daphne Ashbrook). "Yeeuch!" said the gay fans, though they approved of the new Tardis - "very retro". For true aficionados, however, McGann does not count as a real Doctor Who, and the mystery of their idol's orientation remains unsolved.

The obvious answer is that the Doctor, not being human (he has two hearts, for example), is not turned on by homo sapiens of either sex, any more than we are by Cybermen.

A more intriguing possibility is that, just as he has no idea what he will look like when he regenerates - Pertwee's Doctor shrieked when he looked in the mirror - so he does not know in advance for which team he will be playing, as it were.

In which case, perhaps he ought to keep two photographs next to his bed in the Tardis: one of Scarlett Johansson, say, and one of Justin Timberlake. When he regenerates, all he has to do is look at both of them and discover which one makes his hearts beat faster.