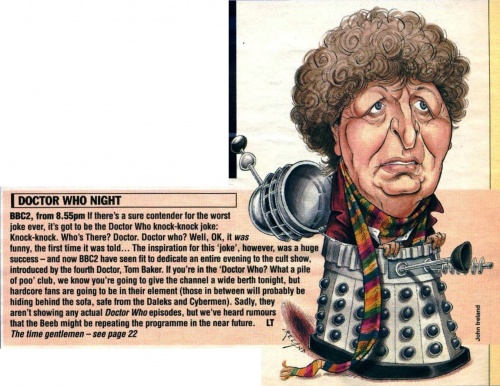 BBC2, from 8.55pm If there's a sure contender for the worst joke ever, it's got to be the Doctor Who knock-knock joke: Knock-knock. Who's There? Doctor. Doctor who? Well, OK, it was funny, the first time it was told... The inspiration for this 'joke', however, was a huge success — and now BBC2 have seen fit to dedicate an entire evening to the cult show, introduced by the fourth Doctor, Tom Baker. If you're in the 'Doctor Who? What a pile of poo' club, we know you're going to give the channel a wide berth tonight, but hardcore fans are going to be in their element (those in between will probably be hiding behind the sofa, safe from the Daleks and Cybermen). Sadly, they aren't showing any actual Doctor Who episodes, but we've heard rumours that the Beeb might be repeating the programme in the near future. LT