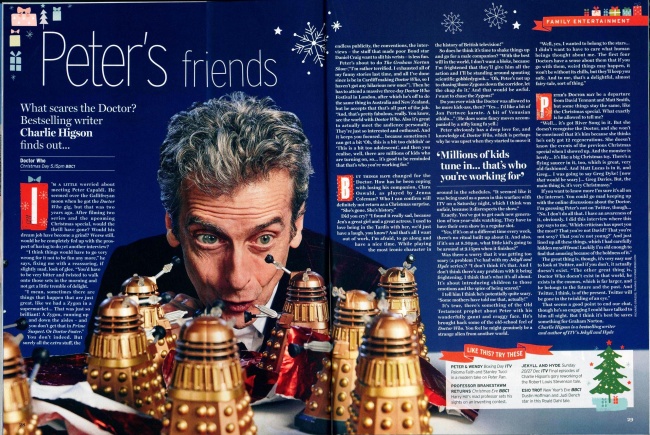 What scares the Doctor? Bestselling writer Charlie Higson finds out...

I'M A LITTLE worried about meeting Peter Capaldi. He seemed over the Gallifreyan moon when he got the Doctor Who gig, but that was two years ago. After filming two series and the upcoming Christmas special, would the thrill have gone? Would his dream job have become a grind? Worse still, would he be completely fed up with the prospect of having to do yet another interview?

"I think things would have to go very wrong for it not to be fun any more" he says, fixing me with a reassuring, if slightly mad, look of glee. "You'd have to be very bitter and twisted to walk onto those sets in the morning and not get a little tremble of delight.

"I mean, sometimes there are things that happen that are just great, like we had a Zygon in a supermarket... That was just so brilliant! A Zygon, running up and down the aisles - and you don't get that in Prime Suspect. Or Doctor Foster." You don't indeed. But surely all the extra stuff; the endless publicity, the conventions, the interviews - the stuff that made poor Bond star Daniel Craig want to slit his wrists - is less fun.

Peter's about to do The Graham Norton Show ("I'm rather terrified. I exhausted all of my funny stories last time, and all I've done since is be in Cardiff making Doctor Who, so I haven't got any hilarious new ones"). Then he has to attend a massive three-day Doctor Who Festival in London, after which he's off to do the same thing in Australia and New Zealand, but he accepts that that's all part of the job. "And, that's pretty fabulous, really. You know, see the world with Doctor Who. Also it's great to actually meet the audience personally. They're just so interested and enthused. And it keeps you focused... because sometimes I can get a bit 'Oh, this is a bit too childish' or 'This is a bit too adolescent, and then you realise, well, there are millions of kids who are turning on, so... it's good to be reminded that that's who you're working for."

BUT THINGS HAVE changed for the Doctor. How has he been coping with losing his companion, Clara Oswald, as played by Jenna Coleman? Who I can confirm will definitely not return as a Christmas surprise. "She's gone. She's history."

Did you cry? "I found it really sad, because Jen's a great girl and a great actress. I used to love being in the Tardis with her, we'd just have a laugh, you know? And that's all I want out of work, I'm afraid, to go along and have a nice time. While playing the most iconic character in the history of British television!"

So does he think it's time to shake things up and go for a male companion? "With the best will in the world, I don't want a bloke, because I'm frightened that they'll give him all the action and I'll be standing around spouting scientific gobbledygook... 'Oh, Peter's not up to chasing those Zygons down the corridor, let the chap do it. And that would be awful. I want to chase the Zygons!"

Do you ever wish the Doctor was allowed to be more kick-ass, then? "Yes... I'd like a bit of Jon Pertwee karate. A bit of Venusian aikido..." (He does some fancy moves accompanied by a nifty kung fu yell.)

Peter obviously has a deep love for, and knowledge of, Doctor Who, which is perhaps why he was upset when they started to move it around in the schedules. "It seemed like it was being used as a pawn in this warfare with ITV on a Saturday night, which I think was unfair, because it disrespects the show."

Exactly. You've got to get each new generation of ten-year-olds watching. They have to have their own show in a regular slot.

"Yes, if it's on at a different time every week, there's no ritual built up about it. And also, if it's on at 8.3Opm, what little kid's going to be around at 9.15pm when it finishes?"

Was there a worry that it was getting too scary (a problem I've had with my Jekyll and Hyde series)? "I don't think it's that. And I don't think there's any problem with it being frightening. I think that's what it's all about. It's about introducing children to those emotions and the spice of being scared:'

I tell him I think he's potentially quite scary. "Some mothers have told me that, actually!"

It's true, there's something of the Old Testament prophet about Peter with his wonderfully gaunt and craggy face. He's brought back some of the old-school feel of Doctor Who. You feel he might genuinely be a strange alien from another world.

"Well, yes, I wanted to belong to the stars... I didn't want to have to care what human beings thought about me. The first four Doctors have a sense about them that if you go with them, weird things may happen, it won't be without its chills, but they'll keep you safe. And to me, that's a delightful, almost fairy-tale, sort of thing."

PETER'S DOCTOR MAY be a departure from David Tennant and Matt Smith, but some things stay the same, like the Christmas special. That exactly is he allowed to tell me?

"Well... it's got River Song in it. But she doesn't recognise the Doctor, and she won't be convinced that it's him because she thinks he's only got 12 regenerations. She doesn't know the events of the previous Christmas special when I showed up. And the monster is lovely... it's like a big Christmas toy. There's a flying saucer in it, too, which is great, very old-fashioned. And Matt Lucas is in it, and Greg... I was going to say Greg Dyke! [now that would be scary]... Greg Davies. But, the main thing is, it's very Christmassy."

If you want to know more I'm sure it's all on the internet. You could go mad keeping up with the online discussions about the Doctor. I'm guessing Peter's not on Twitter, though... "No. I don't do all that. I have an awareness of it, obviously. I did this interview where this guy says to me, 'Which criticism has upset you the most? That you're not David? That you're not sexy? That you're not young?' And just lined up all these things, which I had carefully hidden myself from! Luckily I'm old enough to find that amusing because of the boldness of it:'

The great thing is, though, it's very easy not to look at Twitter, and if you don't, it actually doesn't exist. "The other great thing is, Doctor Who doesn't exist in that world, he exists in the cosmos, which is far larger, and he belongs to the future and the past. And Twitter, I think, is of the present. Twitter will be gone in the twinkling of an eye:'

That seems a good point to end our chat, though he's so engaging I could have talked to him all night. But I think it's best he saves something for Graham Norton.