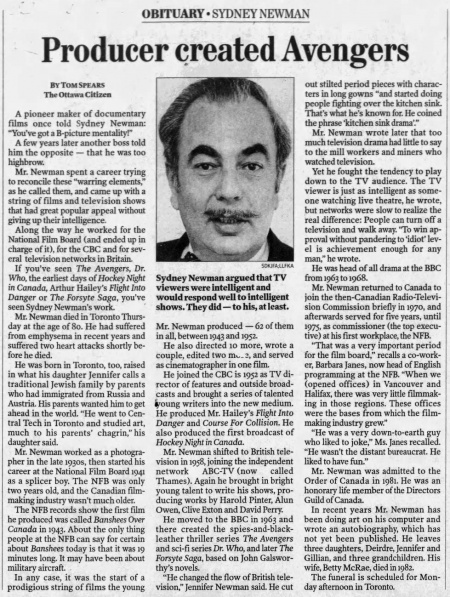 A pioneer maker of documentary films once told Sydney Newman: "You've got a B-picture mentality!"

A few years later another boss told him the opposite — that he was too highbrow.

Mr. Newman spent a career trying to reconcile these "warring elements," as he called them, and came up with a string of films and television shows that had great popular appeal without giving up their intelligence.

Along the way he worked for the National Film Board (and ended up in charge of it), for the CBC and for several television networks in Britain.

If you've seen The Avengers, Dr. Who, the earliest days of Hockey Night in Canada, Arthur Hailey's Flight Into Danger or The Forsyte Saga, you've seen Sydney Newman's work.

Mr. Newman died in Toronto Thursday at the age of 80. He had suffered from emphysema in recent years and suffered two heart attacks shortly before he died.

He was born in Toronto, too, raised in what his daughter Jennifer calls a traditional Jewish family by parents who had immigrated from Russia and Austria. His parents wanted him to get ahead in the world. "He went to Central Tech in Toronto and studied art, much to his parents' chagrin," his daughter said.

Mr. Newman worked as a photographer in the late 1930s, then started his career at the National Film Board 1941 as a splicer boy. The NFB was only two years old, and the Canadian filmmaking industry wasn't much older.

The NFB records show the first film he produced was called Banshees Over Canada in 1943. About the only thing people at the NFB can say for certain about Banshees today is that it was 19 minutes long. It may have been about military aircraft.

He also directed 10 more, wrote a couple, edited two more, and served as cinematographer in one film.

He joined the CBC is 1952 as TV director of features and outside broadcasts and brought a series of talented Young writers into the new medium. He produced Mr. Hailey's Flight Into Danger and Course For Collision. He also produced the first broadcast of Hockey Night in Canada.

He moved to the BBC in 1963 and there created the spies-and-black-leather thriller series The Avengers and sci-fi series Dr. Who, and later The Forsyte Saga, based on John Galsworthy's novels.

"He changed the flow of British television," Jennifer Newman said. He cut out stilted period pieces with characters in long gowns "and started doing people fighting over the kitchen sink. That's what he's known for. He coined the phrase 'kitchen sink drama'."

Mr. Newman wrote later that too much television drama had little to say to the mill workers and miners who watched television.

Yet he fought the tendency to play down to the TV audience. The TV viewer is just as intelligent as someone watching live theatre, he wrote, but networks were slow to realize the real difference: People can turn off a television and walk away. "To win approval without pandering to 'idiot' level is achievement enough for any man," he wrote.

Mr. Newman returned to Canada to join the then-Canadian Radio-Television Commission briefly in 1970, and afterwards served for five years, until 1975, as commissioner (the top executive) at his first workplace, the NFB.

"That was a very important period for the film board," recalls a co-worker, Barbara Janes, now head of English programming at the NFB. "When we (opened offices) in Vancouver and Halifax, there was very little filmmaking in those regions. These offices were the bases from which the filmmaking industry grew"

"He was a very down-to-earth guy who liked to joke," Ms. Janes recalled. "He wasn't the distant bureaucrat. He liked to have fun."

Mr. Newman was admitted to the Order of Canada in 1981. He was an honorary life member of the Directors Guild of Canada.

In recent years Mr. Newman has been doing art on his computer and wrote an autobiography, which has not yet been published. He leaves three daughters, Deirdre, Jennifer and Gillian, and three grandchildren. His wife, Betty McRae, died in 1982.

The funeral is scheduled for Monday afternoon in Toronto.

Caption: Sydney Newman argued that TV viewers were intelligent and would respond well to intelligent shows. They did — to his, at least.