The Doctor is an alien, not a woman 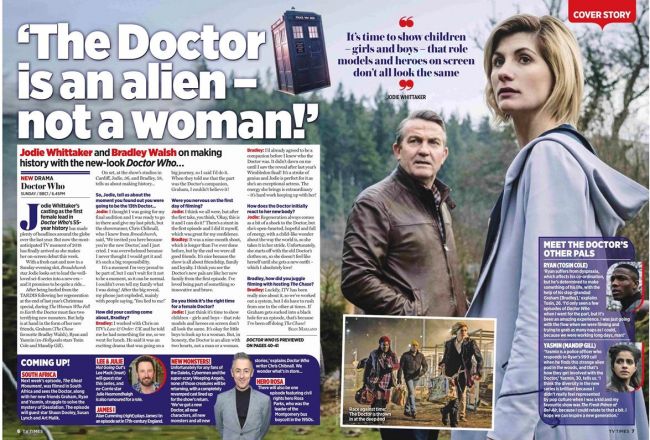 The Doctor is an alien - not a woman

Jodie Whittaker and Bradley Walsh on making history with the new-look Doctor Who...

Jodie Whittaker's casting as the first female lead in Doctor Who's 55-year history has made plenty of headlines around the globe over the last year. But now the most-anticipated TV moment of 2018 has finally arrived as she makes her on-screen debut this week.

With a fresh cast and now in a Sunday-evening slot, Broadchurch star Jodie looks set to lead the well-loved sci-fi series into a new era and it promises to be quite a ride...

After being hurled from the TARDIS following her regeneration at the end of last year's Christmas special, during The Woman Who Fell to Earth the Doctor must face two terrifying new monsters. But help is at hand in the form of her new friends, Graham (The Chase favourite Bradley Walsh), Ryan and Yasmin (ex-Holly oaks stars Tosin Cole and Mandip Gill).

So, Jodie, tell us about the moment you found out you were going to be the 13th Doctor...

Jodie: I thought I was going for my final audition and I was ready to go in there and give my last pitch, but the showrunner, Chris Chibnall, who I knew from Broadchurch, said, We invited you here because you're the new Doctor,' and I just cried. I was overwhelmed because I never thought I would get it and it's such a big responsibility.

It's a moment I'm very proud to be part of, but I can't wait for it not to be a moment, so it can be normal. I couldn't even tell my family what I was doing! After the big reveal, my phone just exploded, mainly with people saying, You lied to me!'

How did your casting come about, Bradley?

Bradley: I worked with Chris on ITV's Law & Order: UK and he told me he had something for me, so we went for lunch. He said it was an exciting drama that was going on a big journey, so I said I'd do it. When they told me that the part was the Doctor's companion, Graham, I couldn't believe it!

Were you nervous on the first day of filming?

Jodie: I think we all were, but after the first take, you think, 'Okay, this is it and I can do it!' There's a stunt in the first episode and I did it myself, which was great for my confidence.

Bradley: It was a nine-month shoot, which is longer than I've ever done before, but by the end we were all good friends. It's nice because the show is all about friendship, family and loyalty. I think you see the Doctor's new pals are like her new family from the first episode. I've loved being part of something so innovative and brave.

Do you think it's the right time for a female Doctor?

Jodie: I just think it's time to show children - girls and boys - that role models and heroes on screen don't all look the same. It's okay for little boys to look up to a woman. But, in honesty, the Doctor is an alien with two hearts, not a man or a woman.

Bradley: I'd already agreed to be a companion before I knew who the Doctor was. It didn't dawn on me until I saw the reveal after last year's Wimbledon final! It's a stroke of genius and Jodie is perfect for it as she's an exceptional actress. The energy she brings is extraordinary - it's hard work keeping up with her!

How does the Doctor initially react to her new body?

Jodie: Regeneration always comes as a bit of a shock to the Doctor, but she's open-hearted, hopeful and full of energy, with a child-like wonder about the way the world is, so she takes it in her stride. Unfortunately, she starts off with the old Doctor's clothes on, so she doesn't fed like herself until she gets a new outfit which I absolutely love!

Bradley, how did you juggle filming with hosting The Chase? Bradley: Luckily, ITV has been really nice about it, so we've worked out a system, but I do have to rush from one to the other at times. If Graham gets sucked into a black hole for an episode, that's because I've been off doing The Chase!

DOCTOR WHO IS PREVIEWED ON PAGES 40-41

Next week's episode, The Ghost Monument, was filmed in South Africa and sees the Doctor, along with her new friends Graham, Ryan and Yasmin, struggle to solve the mystery of Desolation. The episode will guest star Shaun Dooley, Susan Lynch and Art Malik.

Not Going Ours Lee Mack (inset) will guest star this series, and ex-Corrie star Julie Hesmondhalgh is also rumoured for a role.

Unfortunately for any fans of the Daleks, Cybermen and the super-scary Weeping Angels, none of those creatures will be returning, with a completely revamped cast lined up for the show's return.

'We've got a new Doctor, all new characters, all new monsters and all new stories; explains Doctor Who writer Chris Chibnall. We wonder what's in store...

There will also be one episode featuring civil rights hero Rosa Parks, who was the leader of the Montgomery bus boycott in the 1950s.

MEET THE DOCTOR'S OTHER PALS

'Ryan suffers from dyspraxia, which affects his co-ordination, but he's determined to make something of his life, with the help of his step-grandad Graham [Bradley],' explains Tosin, 26. 'I'd only seen a few episodes of Doctor Who when l went for the part, but it's been an amazing experience. l was just going with the flow when we were filming and trying to grab as many naps as l could, because we were working long days, man!'

'Yasmin is a police officer who responds to Ryan's 999 call when he finds this strange alien pod in the woods, and that's how they get involved with the Doctor,' Yasmin, 30, tells us. 'I think the diversity in the new series is brilliant because l didn't really feel represented by pop culture when l was a kid and my favourite show was The Fresh Prince of Bel-Air, because l could relate to that a bit. l hope we can inspire a new generation.

Caption: Race against time: The Doctor is thrown in at the deep end