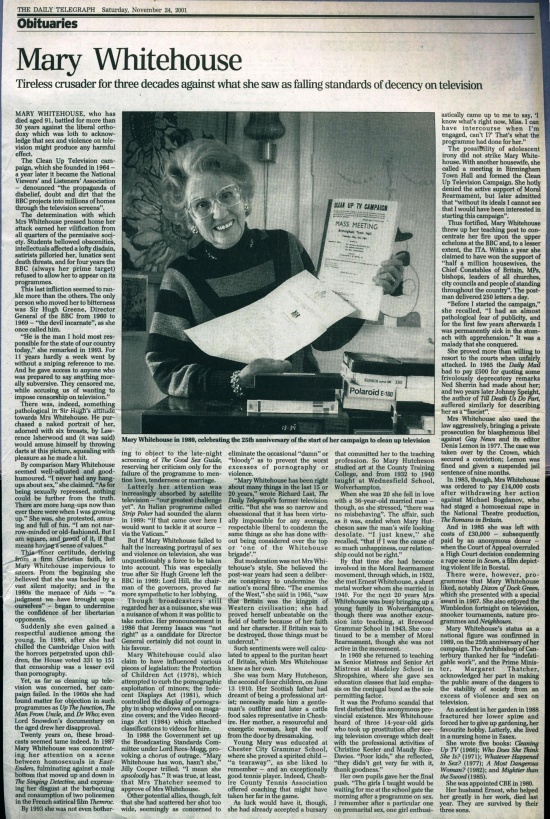 Mary Whitehouse, who has died aged 91, battled for more than 30 years against the liberal orthodoxy which was loth to acknowledge that sex and violence on television might produce any harmful effect.

The Clean Up Television campaign, which she founded in 1964 - a year later it became the National Viewers' and Listeners' Association - denounced "the propaganda of disbelief, doubt and dirt that the BBC projects into millions of homes through the television screens".

The determination with which Mrs Whitehouse pressed home her attack earned her vilification from all quarters of the permissive society. Students bellowed obscenities, intellectuals affected a lofty disdain, satirists pilloried her, lunatics sent death threats, and for four years the BBC (always her prime target) refused to allow her to appear on its programmes.

This last infliction seemed to rankle more than the others. The only person who moved her to bitterness was Sir Hugh Greene, Director General of the BBC from 1960 to 1969 - "the devil incarnate", as she once called him.

"He is the man I hold most responsible for the state of our country today," she remarked in 1993. For 11 years hardly a week went by without a sniping reference to me. And he gave access to anyone who was prepared to say anything morally subversive. They censored me, while accusing us of wanting to impose censorship on television."

There was, indeed, something pathological in Sir Hugh's attitude towards Mrs Whitehouse. He purchased a naked portrait of her, adorned with six breasts, by Lawrence Isherwood and (it was said) would amuse himself by throwing darts at this picture, squealing with pleasure as he made a hit.

By comparison Mary Whitehouse seemed well-adjusted and good-humoured. "I never had any hang-ups about sex," she claimed. "As for being sexually repressed, nothing could be further from the truth. There are more hang-ups now than ever there were when I was growing up." She was, she protested, amusing and full of fun. "I am not narrow-minded or old-fashioned. But I am square, and proud of it, if that means having a sense of values."

This inner certitude, deriving from a firm Christian faith, left Mary Whitehouse impervious to sneers. From the beginning she believed that she was backed by a vast silent majority; and in the 1980s the menace of Aids - "a judgment we have brought upon ourselves" - began to undermine the confidence of her libertarian opponents.

Suddenly she even gained a respectful audience among the young. In 1986, after she had chilled the Cambridge Union with the horrors perpetrated upon children, the House voted 331 to 151 that censorship was a lesser evil than pornography.

Yet, as far as cleaning up television was concerned, her campaign failed. In the 1960s she had found matter for objection in such programmes as Up The Junction, The Man From Uncle, and Dr Who; even Lord Snowdon's documentary on the aged drew her disapproval.

Twenty years on, these broadcasts seemed tame indeed. In 1987 Mary Whitehouse was concentrating her attention on a scene between homosexuals in EastEnders, fulminating against a male bottom that moved up and down in The Singing Detective, and expressing her disgust at the barbecuing and consumption of two policemen in the French satirical film Themroc.

By 1993 she was not even bothering to object to the late-night screening of The Good Sex Guide, reserving her criticism only for the failure of the programme to mention love, tenderness or marriage.

Latterly her attention was increasingly absorbed by satellite television - "our greatest challenge yet". An Italian programme called Strip Poker had sounded the alarm in 1989: "If that came over here I would want to tackle it at source - via the Vatican."

But if Mary Whitehouse failed to halt the increasing portrayal of sex and violence on television, she was unquestionably a force to be taken into account. This was especially true after Sir Hugh Greene left the BBC in 1969: Lord Hill, the chairman of the governors, proved far more sympathetic to her lobbying.

Though broadcasters still regarded her as a nuisance, she was a nuisance of whom it was politic to take notice. Her pronouncement in 1986 that Jeremy Isaacs was "not right" as a candidate for Director General certainly did not count in his favour.

Mary Whitehouse could also claim to have influenced various pieces of legislation: the Protection of Children Act (1978), which attempted to curb the pornographic exploitation of minors; the Indecent Displays Act (1981), which controlled the display of pornography in shop windows and on magazine covers; and the Video Recordings Act (1984) which attached classifications to videos for hire.

In 1988 the Government set up the Broadcasting Standards Committee under Lord Rees-Mogg, provoking a chorus of outrage. "Mary Whitehouse has won, hasn't she," Jilly Cooper trilled. "I mean she apsolootly has." It was true, at least, that Mrs Thatcher seemed to approve of Mrs Whitehouse.

Other potential allies, though, felt that she had scattered her shot too wide, seemingly as concerned to eliminate the occasional "damn" or "bloody" as to prevent the worst excesses of pornography or violence.

"Mary Whitehouse has been right about many things in the last 15 or 20 years," wrote Richard Last, The Daily Telegraph's former television critic. "But she was so narrow and obsessional that it has been virtually impossible for any average, respectable liberal to condemn the same things as she has done without being considered over the top or 'one of the Whitehouse brigade'."

But moderation was not Mrs Whitehouse's style. She believed the post-war years had seen a deliberate conspiracy to undermine the nation's moral fibre. "The enemies of the West," she said in 1965, "saw that Britain was the kingpin of Western civilisation; she had proved herself unbeatable on the field of battle because of her faith and her character. If Britain was to be destroyed, those things must be undercut."

Such sentiments were well calculated to appeal to the puritan heart of Britain, which Mrs Whitehouse knew as her own.

She was born Mary Hutcheson, the second of four children, on June 13 1910. Her Scottish father had dreamt of being a professional artist; necessity made him a gentleman's outfitter and later a cattle food sales representative in Cheshire. Her mother, a resourceful and energetic woman, kept the wolf from the door by dressmaking.

Young Mary was educated at Chester City Grammar School, where she proved a spirited child - "a tearaway", as she liked to remember - and an exceptionally good tennis player. Indeed, Cheshire County Tennis Association offered coaching that might have taken her far in the game.

As luck would have it, though, she had already accepted a bursary that committed her to the teaching profession. So Mary Hutcheson studied art at the County Training College, and from 1932 to 1940 taught at Wednesfield School, Wolverhampton.

When she was 20 she fell in love with a 36-year-old married man - though, as she stressed, "there was no misbehaving". The affair, such as it was, ended when Mary Hutcheson saw the man's wife looking desolate. "I just knew," she recalled, "that if I was the cause of so much unhappiness, our relationship could not be right."

By that time she had become involved in the Moral Rearmament movement, through which, in 1932, she met Ernest Whitehouse, a sheet metal worker whom she married in 1940. For the next 20 years Mrs Whitehouse was busy bringing up a young family in Wolverhampton, though there was another excursion into teaching, at Brewood Grammar School in 1943. She continued to be a member of Moral Rearmament, though she was not active in the movement.

In 1960 she returned to teaching as Senior Mistress and Senior Art Mistress at Madeley School in Shropshire, where she gave sex education classes that laid emphasis on the conjugal bond as the sole permitting factor.

It was the Profumo scandal that first disturbed this anonymous provincial existence. Mrs Whitehouse heard of three 14-year-old girls who took up prostitution after seeing television coverage which dealt with the professional activities of Christine Keeler and Mandy Rice-Davies. "Poor kids," she reflected, "they didn't get very far with it, thank goodness."

Her own pupils gave her the final push. "The girls I taught would be waiting for me at the school gate the morning after a programme on sex. I remember after a particular one on premarital sex, one girl enthusiastically came up to me to say, 'I know what's right now, Miss. I can have intercourse when I'm engaged, can't I?' That's what the programme had done for her."

The possibility of adolescent irony did not strike Mary Whitehouse. With another housewife, she called a meeting in Birmingham Town Hall and formed the Clean Up Television Campaign. She hotly denied the active support of Moral Rearmament, but later admitted that "without its ideals I cannot see that I would have been interested in starting this campaign".

Thus fortified, Mary Whitehouse threw up her teaching post to concentrate her fire upon the upper echelons at the BBC and, to a lesser extent, the ITA. Within a year she claimed to have won the support of "half a million housewives, the Chief Constables of Britain, MPs, bishops, leaders of all churches, city councils and people of standing throughout the country". The postman delivered 250 letters a day.

"Before I started the campaign," she recalled, "I had an almost pathological fear of publicity, and for the first few years afterwards I was permanently sick in the stomach with apprehension." It was a malady that she conquered.

She proved more than willing to resort to the courts when unfairly attacked. In 1965 the Daily Mail had to pay £500 for quoting some frivolously deprecatory remarks Ned Sherrin had made about her; and two years later Johnny Speight, the author of Till Death Us Do Part, suffered similarly for describing her as a "fascist".

Mrs Whitehouse also used the law aggressively, bringing a private prosecution for blasphemous libel against Gay News and its editor Denis Lemon in 1977. The case was taken over by the Crown, which secured a conviction; Lemon was fined and given a suspended jail sentence of nine months.

In 1983, though, Mrs Whitehouse was ordered to pay £14,000 costs after withdrawing her action against Michael Bogdanov, who had staged a homosexual rape in the National Theatre production, The Romans in Britain.

And in 1985 she was left with costs of £30,000 - subsequently paid by an anonymous donor - when the Court of Appeal overruled a High Court decision condemning a rape scene in Scum, a film depicting violent life in Borstal.

There were, however, programmes that Mary Whitehouse liked, notably Dixon of Dock Green, which she presented with a special award in 1967. She also enjoyed the Wimbledon fortnight on television, snooker tournaments, nature programmes and Neighbours.

Mary Whitehouse's status as a national figure was confirmed in 1989, on the 25th anniversary of her campaign. The Archibishop of Canterbury thanked her for "indefatigable work", and the Prime Minister, Margaret Thatcher, acknowledged her part in making the public aware of the dangers to the stability of society from an excess of violence and sex on television.

An accident in her garden in 1988 fractured her lower spine and forced her to give up gardening, her favourite hobby. Latterly, she lived in a nursing home in Essex.

Her husband Ernest, who helped her greatly in her work, died last year. They are survived by their three sons.