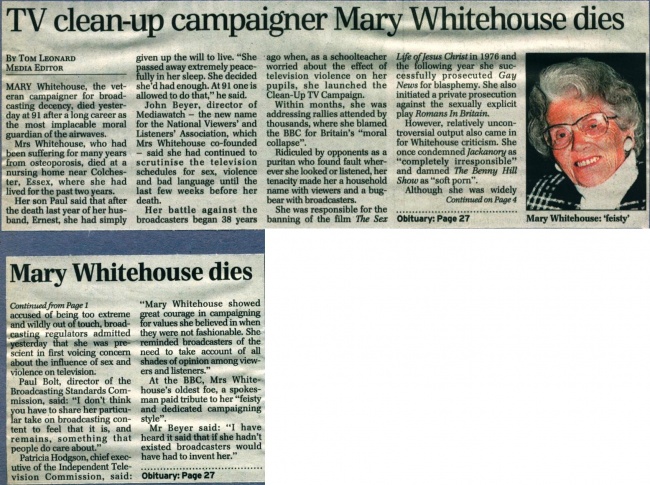 MARY Whitehouse, the veteran campaigner for broadcasting decency, died yesterday at 91 after a long career as the most implacable moral guardian of the airwaves.

Mrs Whitehouse, who had been suffering for many years from osteoporosis, died at a nursing home near Colchester, Essex, where she had lived for the past two years.

Her son Paul said that after the death last year of her husband, Ernest, she had simply given up the will to live. "She passed away extremely peacefully in her sleep. She decided she'd had enough. At 91 one is allowed to do that," he said.

John Beyer, director of Mediawatch — the new name for the National Viewers' and Listeners' Association, which Mrs Whitehouse co-founded — said she had continued to scrutinise the television schedules for sex, violence and bad language until the last few weeks before her death.

Her battle against the broadcasters began 38 years ago when, as a schoolteacher worried about the effect of television violence on her pupils, she launched the Clean-Up TV Campaign.

Within months, she was addressing rallies attended by thousands, where she blamed the BBC for Britain's "moral collapse".

Ridiculed by opponents as a puritan who found fault wherever she looked or listened, her tenacity made her a household name with viewers and a bugbear with broadcasters.

She was responsible for the banning of the film The Sex Life of Jesus Christ in 1976 and the following year she successfully prosecuted Gay News for blasphemy. She also initiated a private prosecution against the sexually explicit play Romans In Britain.

Although she was widely accused of being too extreme and wildly out of touch, broadcasting regulators admitted yesterday that she was prescient in first voicing concern about the influence of sex and violence on television.

Paul Bolt, director of the Broadcasting Standards Commission, said: "I don't think you have to share her particular take on broadcasting content to feel that it is, and remains, something that people do care about."

Patricia Hodgson, chief executive of the Independent Television Commission, said: "Mary Whitehouse showed great courage in campaigning for values she believed in when they were not fashionable. She reminded broadcasters of the need to take account of all shades of opinion among viewers and listeners."

At the BBC, Mrs Whitehouse's oldest foe, a spokesman paid tribute to her "feisty and dedicated campaigning style".

Mr Beyer said: "I have heard it said that if she hadn't existed broadcasters would have had to invent her."