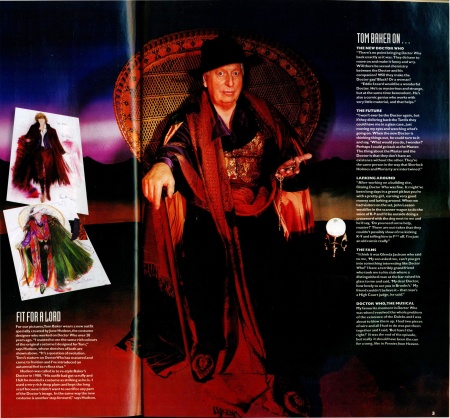 THE NEW DOCTOR WHO

"There's no point bringing Doctor Who back exactly as it was. They do have to move on and make it funny and wry. Will there be sexual chemistry between the Doctor and his companion? Will they make the Doctor gay? Black? Or a woman?

"Eddie Izzard would be a wonderful Doctor. He's so mysterious and strange, but at the same time benevolent. He's also a comic genius who works with very little material, and that helps."

"I won't ever be the Doctor again, but if they did bring back the Tardis they could have me in a glass case, just moving my eyes and watching what's going on. When the new Doctor is thinking things out, he could turn to it and say, 'What would you do, I wonder?' Perhaps I could go back as the Master. The thing about the Master and the Doctor is that they don't have an existence without the other. They're the same person in the way that Sherlock Holmes and Moriarty are intertwined."

"After working on a building site, filming Doctor Who was fine. It might've been long days in a gravel pit but you're with a pretty girl, earning very good money and larking around. When we had visitors on the set, John Leeson would be in the scanner wagon to do the voice of K-9 and I'd be outside doing a crossword with the dog next to me and he'd say, 'Do you need some help, master?' There are out-takes that they couldn't possibly show of me kicking K-9 and telling him to f*" off. I'm just an old comic really."

"I think it was Glenda Jackson who said to me, 'My son asked me, can't you get into something interesting like Doctor Who?' I have a terribly grand friend who took me to his club where a distinguished man at the bar raised his glass to me and said, 'My dear Doctor, how lovely to see you in Brooks's.' My friend couldn't believe it--that man's a High Court judge, he said."

DOCTOR WHO, THE MUSICAL

My favourite moment in Doctor Who was when I resolved the whole problem of the existence of the Daleks and I was about to blow them up. I had two pieces of wire and all I had to do was put them together and I said, 'But have I the right?' It was the end of the episode, but really it should have been the cue for a song, like in Pennies from Heaven.

FIT FOR A LORD

For our pictures, Tom Baker wears a new outfit specially created by June Hudson, the costume designer who worked on Doctor Who over 20 years ago. "I wanted to use the same rich colours of the original costume I designed for Tom," says Hudson, whose sketches of both are shown above. "It's a question of evolution. Tom's stature on Doctor Who has matured and come to fruition and I've introduced an autumnal feel to reflect that." Hudson was called in to re-style Baker's Doctor in 1980. "His outfit had got scruffy and I felt he needed a costume as striking as he is. used a very rich deep plum and kept the long scarf because I didn't want to sacrifice any part of the Doctor's image. In the same way the new costume is another step forward," says Hudson.