Who do you do? 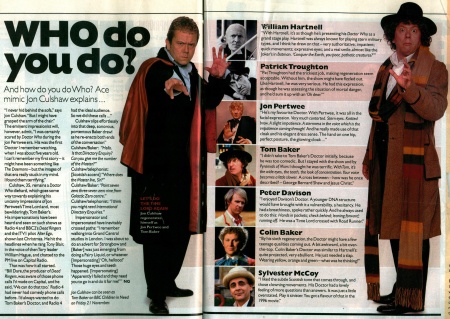 "I never hid behind the sofa;" says Jon Culshaw. "But I might have grasped the arm of the chair:' The eminent impressionist will, however, admit, "I was certainly scared by Doctor Who during the Jon Pertwee era. His was the first Doctor I remember watching, when I was about five years old. I can't remember my first story — it might have been something like The Daemons—but the images of that era really stuck in my mind. I found them terrifying?'

Culshaw, 35, remains a Doctor Who diehard, which goes some way towards explaining his uncanny impressions of Jon Pertwee's Time Lord and, most bewilderingly, Tom Baker's. His impersonations have been heard and seen on such shows as Radio 4 and BBC2's Dead Ringers and the ITV 1pilot Alter Ego, shown last Christmas. He hit the headlines when he rang Tony Blair, in the voice of then Tory leader William Hague, and chatted to the PM live on Capital Radio.

That was how it all started. "Bill Dare, the producer of Dead Ringers, was aware of those phone calls I'd made on Capital, and he said, We can do that too.' Radio 4 had never had comedy phone calls before. I'd always wanted to do Tom Baker's Doctor, and Radio 4 had the ideal audience. So we did these calls ..."

Culshaw slips effortlessly into that deep, sonorous, portentous Baker drawl as he re-enacts both ends of the conversation"

Culshaw/Baker: "Hello. Is that Directory Enquiry? Can you give me the number of the Master?"

Culshaw/telephonist: [Scottish accent] "Where does the Master live, Sir?"

Culshaw/telephonist: 'I think you might need International Directory Enquiries."

Impersonator and impersonated have inevitably crossed paths: "I remember walking into Grand Central studios in London. I was about to do an advert for Strongbow and [Baker] was just emerging from doing a Fairy Liquid, or whatever. [Impersonating]'Oh, hellooo!' Those huge eyes and teeth happened. [Impersonating] 'Apparently I failed and they need you to go in and do it for me!'"

Jon Culshaw can be seen as Tom Baker on BBC Children in Need on Friday 21 November.

"With Hartnell, it's as though he's presenting his Doctor Who as a grand stage play. Hartnell was always known for playing stern military types, and I think he drew on that—very authoritative; impatient; quick movements; expressive eyes; and a real smile, almost like the Joker's in Batman. 'Conquer the Earth, you poor, pathetic creatures?"'

"Pat Troughton had the trickiest job, making regeneration seem acceptable. Without him, the show might have fizzled out. Like Hartnell, he was very serious. He had this expression, as though he was assessing the situation of mortal danger, and he'd sum it up with an 'Oh dear."'

"He's my favourite Doctor. With Pertwee, it was all in the facial expression. Very much contorted. Stern eyes. Knitted brow. A slight impatience. A sternness in the voice which is the impatience coming through! And he really made use of that cloak and his elegant dress sense. The hand on one hip, perfect posture, the glowing cloak ..."

"I didn't take to Tom Baker's Doctor initially, because he was too comedic. But I stayed with the show and by Pyramids of Mars I thought he was terrific. With Tom, it's the wide eyes, the teeth, the look of concentration. Your voice becomes a little slower. A cross between — how was he once described? — George Bernard Shaw and Jesus Christ."

"I enjoyed Davison's Doctor. A younger DNA structure would have brought with it a vulnerability, a hesitancy. He had a breathiness, spoke rather quickly. And he always used to do this: Hands in pockets; check behind; leaning forward; running off He was a Time Lord crossed with Road Runner."

"By his sixth regeneration, the Doctor might have a few teenage qualities coming out. A bit awkward, a bit over-the-top. Colin Baker's Doctor was similar to Hartnell's: quite projected, very ebullient. He just needed a slap. Wearing yellow, orange and green — what was he thinking?"

"I liked the subtle Scottish tone that comes through, and those clowning movements. His Doctor had a lovely feeling of more questions than answers. It was just a little overstated. Play it sinister. You got a flavour of that in the 1996 movie."