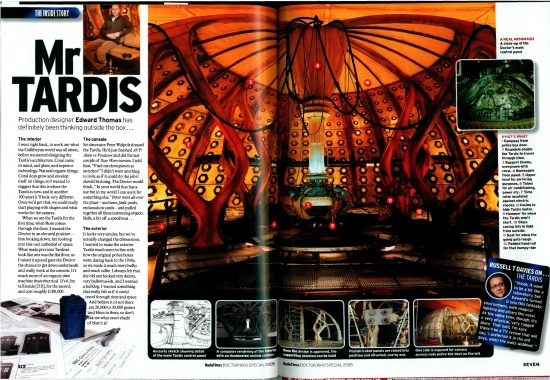 Production designer Edward Thomas has definitely been thinking outside the box ...

I went right back, to work out what the Gallifreyan world was all about, before we started designing the Tardis's architecture. Coral came to mind, and glass, and superior technology. Natural organic things. Coral does grow and envelop itself on things, so I wanted to suggest that this is where the Tardis is now, and in another 100 years it'll look very different. Once we'd got that, we could really start playing with shapes and what works for the camera.

When we see the Tardis for the first time, when Rose comes through the door, I wanted the Doctor in an elevated position — him looking down, her looking into this vast cathedral of space. What made previous Tardises look like sets was the flat floor, so I raised it up and gave the Doctor the chance to get down underneath and really work at the console. It's much more of an organic time machine than electrical. It's 6.5m tall inside [2l ft], for the record, and cost roughly £ 100,000.

Set decorator Peter Walpole dressed the Tardis. He'd just finished AVP: Alien vs Predator and did the last couple of Star Wars movies. I told him, "Find me chess pieces as switches!" I didn't want anything to look as if it could do the job it should be doing. The Doctor would think, "In your world that has a use but in my world I can use it for something else." Peter went all over the place — auctions, junk yards, reclamation yards — and pulled together all these interesting objects. Bells, a bit off a speedboat ..

It looks very similar, but we've actually changed the dimensions. I wanted to make the exterior Tardis much more in line with how the original police boxes were, dating back to the 1930s, so we made it much more bulky and much taller. I always felt that the old one looked very dainty, very ballerina-ish, and I wanted a bulldog. I wanted something that really felt as if it could travel through time and space. And believe it or not there are 20,000 to 30,000 greens and blues in there, so don't ask me what exact shade of blue it is!

2 Roundels enable the Tardis to travel through time.

9 Hammer for when the Tardis won't start.

10 Glass casing lets in light from outside.

11 Seat for when the going gets rough.

RUSSELL T DAVIES ON ... THE TARDIS

"Inside, it used to be a bit like a laboratory, but Edward's turned it into this fantastic environment, with magical lighting and pillars like coral. At the same time, though, it's a very physical, very rugged place. That said, I'm sure there'll be a TV review that will say, 'I preferred it in the old days, when the walls wobbled,'"

A computer rendering of the interior with an illuminated central column

Once the design is approved, the supporting skeleton can be built

Prefabricated panels are raised into position and attached, one by one

One side is exposed for camera access; note police box door on the left

Caption: A REAL MISHMASH A close-up of the Doctor's main control panel