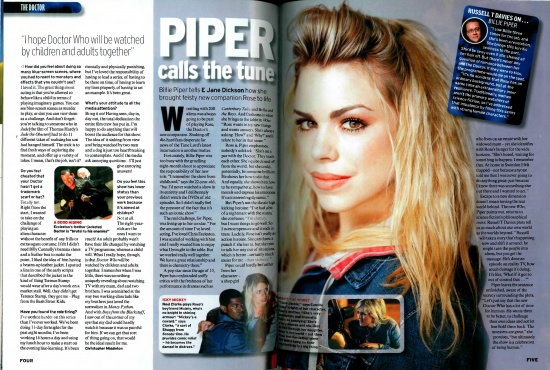 Wrestling with 2011 aliens was always going to be part of playing Rose, the Doctor's new companion. Shaking off die-hard fans desperate for news of the Time Lord's latest incarnation is another matter.

Fortunately, Billie Piper was too busy with the gruelling eight-month shoot to appreciate the responsibility of her new role. "I remember the show from childhood," says the 22-year-old, "but I'd never watched a show in its entirety and I deliberately didn't watch the DVDs of old episodes. So I didn't really feel the pressure of the fact that it's such an iconic show."

The real challenge, for Piper, was living up to her co-star. "For the amount of time I've loved acting, I've loved Chris Eccleston. I was scared of working with him and I really wanted him to enjoy what I brought to the table. But we worked really well together. We have a great relationship and there is chemistry there."

A pop star since the age of 15, Piper has confounded sniffy critics with the freshness of her Canterbury Tales and Bella and the Boys. And freshness is what she brings to the table in Who. "Rose wants to try new things and wants answers. She's always asking 'How?' and 'Why?' and I relate to her in that sense."

Rose is, Piper emphasises, nobody's sidekick. "She's on a par with the Doctor. They teach each other. She's quite closed off from the world, but she could, potentially, be someone brilliant. He shows her how to do that. And equally, she shows him how to be sympathetic, how to have morals and express his emotions. It's an interesting dynamic."

But Piper's not the classic high-kicking heroine: "I've had a bit of a nightmare with the stunts," she confesses. "I'm clumsy, but I want things to go well. So I overcompensate and it ends in tears. Luckily, Rose isn't really a action heroine. She can throw a punch if she has to, but she tries to talk her way out of situations, which is better — certainly much easier for me — than violence."

Piper could hardly be further from her character a shop girl who lives on an estate with her widowed mum — yet she identifies with Rose's hunger for the wide horizon. "She's bored, waiting for something to happen. I remember that. At home in Swindon I felt trapped — not because anyone told me that I was never going to do anything great; just because I knew there was something else out there and I wanted to act." Escape to a new dimension doesn't mean leaving the real world behind. The new Who, Piper points out, returns to science fiction's philosophical roots: Russell T Davies plots tell us as much about our own world as the worlds beyond. "Russell will take a story that's happening now and shift it around: he might turn the people into aliens, but you get the message. He's done an episode on reality TV, how much damage it's doing. It's like, 'What if it got so out of control that ..."' Piper leaves the sentence unfinished, aware of the secrecy surrounding the plots. "Let's just say that the new Doctor Who has a lot of time for humans. He wants them to be better, to challenge their own ideas and not let fear hold them back. The monsters are great," she promises, "but ultimately the show is a celebration of being human."

She's so annoying! She's a lazy woman and she likes live through her daughter. Rose is her world — but then she lost her father when she was a baby, so their relationship is a big thing."

Noel Clarke plays Rose's boyfriend Mickey, who's no knight in shining armour: "Mickey's a coward," says Clarke, "a sort of Shaggy from Scooby-Doo. He provides comic relief he becomes the damsel in distress."

"I saw Billie three he's been the job, and she's been a revelation. She brings this terrific sexiness to the part. She'd be sexy even if shaved all her hair off. But there's never any question of romance between her and the Doctor. If they were to kiss, the programme would die on the spot.

"It's no accident that Rose has an ordinary background, but at the same an extraordinary inner resilience. Traditionally, women aren't the primary watchers of science fiction, so I've addressed that imbalance by filling this series with strong female characters." Wrestling with 2011 aliens was always going to be part of playing Rose, the Doctor's new companion. Shaking off die-hard fans desperate for news of the Time Lord's latest incarnation is another matter.

Caption: A GOOD HIDING Eccleston's leather-jacketed Doctor is "brutal to his enemies"