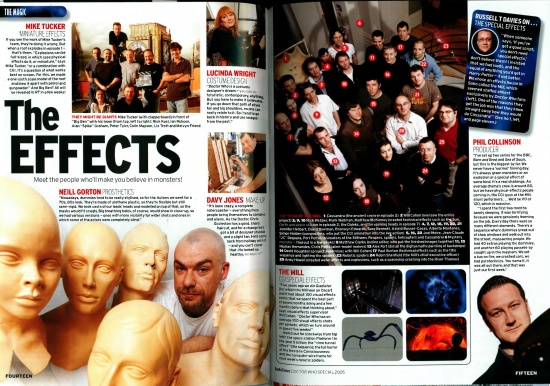 If you see the work of Mike Tucker's team, they're doing it wrong. But when a roof explodes in episode 1-that's them. "Explosions can be full-sized, in which case physical effects do it, or miniature," says Mike Tucker, "or a combination with CGI. It's a question of what works best on screen. For this, we made a one-sixth scale model of the roof and blew it apart with petrol and gunpowder." And Big Ben? All will be revealed in RT in a few weeks!

Meet the people who'll make you believe in monsters!

"Nowadays, dummies tend to be really stylised, so for the Autons we went for a 70s, 80s look. They're made of urethane plastic, so they're flexible but still semi-rigid. We took casts of our leads' heads and modelled on top of that, so the masks would fit snugly. Big breathing holes, of course, would show in close-up, so we had various versions - ones with more visibility for wider shots and ones in which some of the actors were completely blind."

"Doctor Who is a costume designer's dream-- you can do futuristic, contemporary, anything. But you have to make it believable. If you go down that path of silver foil and big shoulders, no one can really relate to it. So I tend to go back in history and use images from the past."

"It's been crazy, a complete rollercoaster - everything from people being themselves to zombies and aliens. As the Doctor, Chris Eccleston has a good, sharp haircut, and for a change he's got a bit of designer stubble and a slight tan. He'd come back from holiday with it - and you can't cover that. He looked so healthy, we kept it."

Watch out for (clockwise from top left): the space station Platform 1 in the year 5 billion; the "time tunnel effect" title sequence; the full horror of the Nestene Consciousness; and the computer wire frame for next week's robotic spiders.

"When someone says, 'If you've got a good script, you don't need special effects,' don't believe them! I insisted that we had loads, and the equal of anything you'd get in Harry Potter— if not better. We chose an effects house in Soho called the Mill, which seemed staffed almost exclusively by Doctor Who fans (left). One of the reasons they got the job was that they knew straight away how they would do Cassandra!" (See no 1, left, and page eleven.)

"I've set up two series for the BBC, Born and Bred and Sea of Souls, but this is the biggest by far. We never have a 'normal' filming day. It's always green monsters or an explosion or a special effect of some kind. It's a real challenge. An average drama's crew is around 80, but we have physical-effects people coming in, the CGI guys at the Mill, stunt performers ... We'd be 110 or 120, which is massive.

"I spent the first two months barely sleeping. It was terrifying because we were genuinely learning on the job. Every day there were so many different elements. There's a sequence where dummies break out of shop windows and walk out into the street, massacring people. We had 40 extras playing the dummies, and another 60 playing passers-by caught up in the mayhem. We set a bus on fire, we crashed cars, we had pyrotechnics. You name it, it was all out there, and that was just our first week."