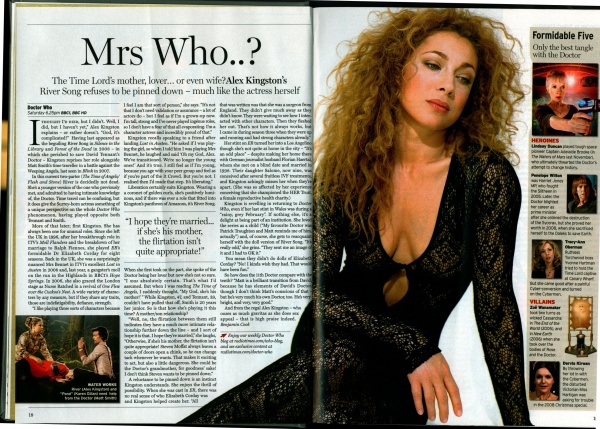 The Time Lord's mother, lover... or even wife? Alex Kingston's River Song refuses to be pinned down - much like the actress herself

I THOUGHT I'D DIED, but I didn't. Well, I did, but I haven't yet," Alex Kingston explains - or rather doesn't. "God, it's complicated!" Having last appeared as the beguiling River Song in Silence in the Library and Forest of the Dead in 2008 - in which she perished to save David Tennant's Doctor - Kingston reprises her role alongside Matt Smith's time traveller in a battle against the Weeping Angels, last seen in Blink in 2007.

In this current two-parter (The Time of Angels/Flesh and Stone) River is decidedly not dead. She's a younger version of the one who previously met, and admitted to having intimate knowledge of, the Doctor. Time travel can be confusing, but it does give the Surrey-born actress something of a unique perspective on the whole Doctor Who phenomenon, having played opposite both Tennant and Smith.

More of that later; first Kingston. She has always been one for unusual roles. Since she left the UK in 1996, after her breakthrough role in ITV's Moll Flanders and the breakdown of her marriage to Ralph Fiennes, she played ER's formidable Dr Elizabeth Corday for eight seasons. Back in the UK, she was a surprisingly nuanced Mrs Bennet in ITV1's excellent Lost in Austen in 2008 and, last year, a gangster's moll on the run in the Highlands in BBC1's Hope Springs. In 2006, she also graced the London stage as Nurse Ratched in a revival of One Flew over the Cuckoo's Nest. A wide variety of characters by any measure, but if they share any traits, those are indefatigability, defiance, strength.

"I like playing those sorts of characters because I feel I am that sort of person," she says. "It's not that I don't need validation or assurance - a lot of actors do - but I feel as if I'm a grown-up now. I'm tall, strong and I've never played ingénue roles, so I don't have a fear of that all evaporating. I'm a character actress and incredibly proud of that:'

Kingston recalls speaking to a friend after landing Lost in Austen. "He asked if I was playing the girl, so when I told him I was playing Mrs Bennet, he laughed and said 'Oh my God, Alex. We've transitioned. We're no longer the young ones!' And it's true. I still feel as if I'm young, because you age with your peer group and feel as if you're part of the It Crowd. But you're not. I realised then I'd made that step. It's liberating."

Liberation certainly suits Kingston. Wearing a a coronet of golden curls, she's positively luminous, and if there was ever a role that fitted into Kingston's pantheon of Amazons, it's River Song. When she first took on the part, she spoke of the Doctor being her lover but now she's not so sure. "I was absolutely certain. That's what I'd assumed. But when I was reading The Time of Angels, I suddenly thought, "My God, she's his mother!' " While Kingston, 47, and Tennant, 39, couldn't have pulled that off, Smith is 20 years her junior. So is that how she's playing it this time? A mother/son relationship?

"Well, no, the flirtation between them still indicates they have a much more intimate relationship further down the line - and I sort of hope it is that. I hope they're married," she laughs, "Otherwise, if she's his mother, the flirtation isn't quite appropriate! Steven Moffat always leaves a couple of doors open a chink, so he can change tack whenever he wants. That makes it exciting to act, but also a little dangerous. She could be the Doctor's grandmother, for goodness' sake! I don't think Steven wants to be pinned down."

A reluctance to be pinned down is an instinct Kingston understands. She enjoys the thrill of possibility. When she was cast in ER, there was no real sense of who Elizabeth Corday was and Kingston helped create her. "All that was written was that she was a surgeon from England. They didn't give much away as they didn't know. They were waiting to see how I interacted with other characters. Then they fleshed her out. That's not how it always works, but I came in during season three when they were up and running and had strong characters already."

Her stint on ER turned her into a Los Angelino though she's not quite at home in the city - "It's an odd place" - despite making her home there with German journalist husband Florian Haertal, whom she met on a blind date and married in 1998. Their daughter Salome, now nine, was conceived after several fruitless IVF treatments, and Kingston achingly misses her when they're apart. (She was so affected by her experience conceiving that she championed the HER Trust, a female reproductive health charity.)

Kingston is revelling in returning to Doctor Who, even if her last stint in Wales was during a "rainy, grey February". If nothing else, it's a delight at being part of an institution. She loved the series as a child ("My favourite Doctor was Patrick Troughton and Matt reminds me of him, actually") and, of course, she gets to reacquaint herself with the doll version of River Song. "It's really odd," she grins. "They sent me an image of it and I had to OK it."

You mean they didn't do dolls of Elizabeth Corday? "No! I kinda wish they had. That would have been fun."

So how does the 11th Doctor compare with tenth? "Matt is a brilliant transition from David, because he has elements of David's Doctor though I don't think Matt's conscious of that but he's very much his own Doctor, too. He's very bright, and very, very good."

And from the regal Alex Kingston - who oozes as much gravitas as she does sex appeal - that is high praise indeed.

Only the best tangle with the Doctor

Penelope Wilton was Harriet Jones MP, who fought the Slitheen in 2005. Later, the Doctor blighted her career as prime minister after she ordered the destruction of the Sycorax, but she proved her worth in 2008, when she sacrificed herself to the Daleks to save Earth.

Tracy-Ann Oberman Ruthless Torchwood boss Yvonne Hartman tried to hold the Time Lord captive at Canary Wharf. But she came good after a painful Cyber-conversion and turned on the Cybermen.

Zoë Wanamaker took two turns as wicked Cassandra: in The End of the World (2005), and in New Earth (2006) when she took over the bodies of Rose and the Doctor.

Dervla Kirwan By throwing her lot in with the Cybermen, the disturbed Victorian Miss Hartigan was asking for trouble in the 2008 Christmas special.