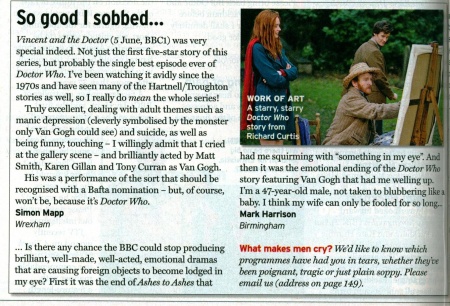 Vincent and the Doctor (5 June, BBC1) was very special indeed. Not just the first five-star story of this series, but probably the single best episode ever of Doctor Who. I've been watching it avidly since the 1970s and have seen many of the Hartnell/Troughton stories as well, so I really do mean the whole series!

Truly excellent, dealing with adult themes such as manic depression (cleverly symbolised by the monster only Van Gogh could see) and suicide, as well as being funny, touching - I willingly admit that I cried at the gallery scene - and brilliantly acted by Matt Smith, Karen Gillan and Tony Curran as Van Gogh.

His was a performance of the sort that should be recognised with a Bafta nomination - but, of course, won't be, because it's Doctor Who.

... Is there any chance the BBC could stop producing brilliant, well-made, well-acted, emotional dramas that are causing foreign objects to become lodged in my eye? First it was the end of Ashes to Ashes that had me squirming with "something in my eye". And then it was the emotional ending of the Doctor Who story featuring Van Gogh that had me welling up. I'm a 47-year-old male, not taken to blubbering like a baby. I think my wife can only be fooled for so long...