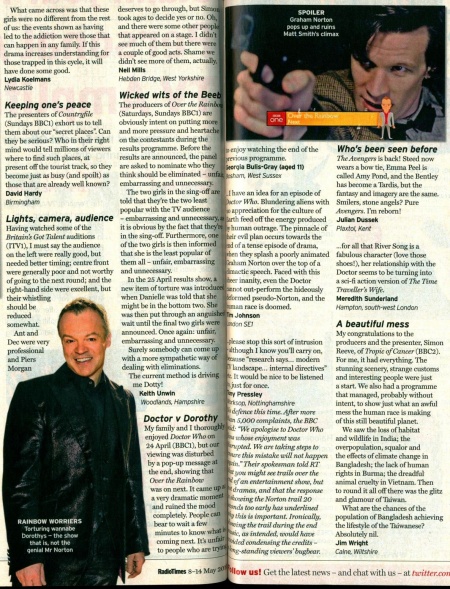 My family and I thoroughly enjoyed Doctor Who on 24 April (BBC1), but our viewing was disturbed by a pop-up message at the end, showing that Over the Rainbow was on next. It came up at a very dramatic moment and ruined the mood completely. People can bear to wait a few minutes to know what is coming next. It's unfair to people who are trying to enjoy watching the end of the previous programme.

... I have an idea for an episode of Doctor Who. Blundering aliens with no appreciation for the culture of Earth feed off the energy produced by human outrage. The pinnacle of their evil plan occurs towards the end of a tense episode of drama, when they splash a poorly animated Graham Norton over the top of a climactic speech. Faced with this sheer inanity, even the Doctor not out-perform the hideously deformed pseudo-Norton, and the an race is doomed.

... please stop this sort of intrusion although I know you'll carry on, because "research says... modern TV landscape... internal directives" etc. It would be nice to be listened just for once.

No defence this time. After more than 5,000 complaints, the BBC said: "We apologise to Doctor Who fans whose enjoyment was disrupted. We are taking steps to ensure this mistake will not happen again." Their spokesman told RT that you might see trails over the end of an entertainment show, but not dramas, and that the response to showing the Norton trail 20 seconds too early has underlined why this is important. Ironically, showing the trail during the end music, as intended, would have avoided condensing the credits a long-standing viewers' bugbear.

Who's been seen before

The Avengers is back! Steed now wears a bow tie, Emma Peel is called Amy Pond, and the Bentley has become a Tardis, but the fantasy and imagery are the same. Smilers, stone angels? Pure Avengers. I'm reborn!

...for all that River Song is a fabulous character (love those shoes!), her relationship with the Doctor seems to be turning into a sci-fi action version of The Time Traveller's Wife.