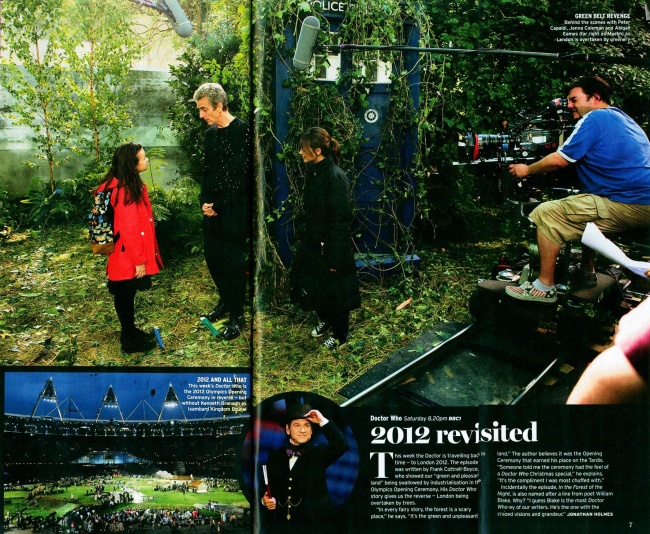 This week the Doctor is travelling back in time - to London 2012. The episode was written by Frank Cottrell-Boyce, who showed our "green and pleasant land" being swallowed by industrialisation in the Olympics Opening Ceremony. His Doctor Who story gives us the reverse - London being overtaken by trees.

"In every fairy story, the forest is a scary place," he says. "It's the green and unpleasant land." The author believes it was the Opening Ceremony that earned his place on the Tardis. "Someone told me the ceremony had the feel of a Doctor Who Christmas special," he explains. "It's the compliment I was most chuffed with." Incidentally the episode, In the Forest of the Night, is also named after a line from poet William Blake. Why? "I guess Blake is the most Doctor Who-ey of our writers. He's the one with the crazed visions and grandeur."

Caption: GREEN BELT REVENGE Behind the scenes with Peter Capaldi, Jenna Coleman and Abigail Eames (far right as Maebh) as London is overtaken by greenery

Caption: 2012 AND ALL THAT This week's Doctor Who is the 2012 Olympics Opening Ceremony in reverse - but without Kenneth Branagh as Isambard Kingdom Brunel