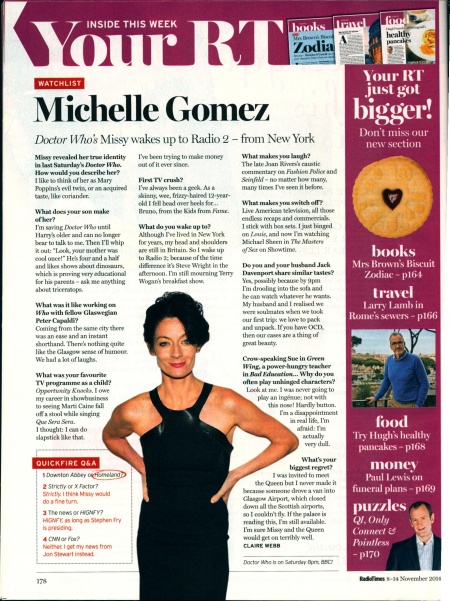 Doctor Who's Missy wakes up to Radio 2 — from New York

Missy revealed her true identity in last Saturday's Doctor Who. How would you describe her?

I like to think of her as Mary Poppins's evil twin, or an acquired taste, like coriander.

What does your son make of her?

I'm saving Doctor Who until Harry's older and can no longer bear to talk to me. Then I'll whip it out: "Look, your mother was cool once!" He's four and a half and likes shows about dinosaurs, which is proving very educational for his parents - ask me anything about triceratops.

What was it like working on Who with fellow Glaswegian Peter Capaldi?

Coming from the same city there was an ease and an instant shorthand. There's nothing quite like the Glasgow sense of humour. We had a lot of laughs.

What was your favourite TV programme as a child? Opportunity Knocks. I owe my career in showbusiness to seeing Math Caine fall off a stool while singing Que Sera Sera.

I've been trying to make money out of it ever since.

I've always been a geek. As a skinny, wee, frizzy-haired 12-year-old I fell head over heels for... Bruno, from the Kids from Fame.

What do you wake up to?

Although I've lived in New York for years, my head and shoulders are still in Britain. So I wake up to Radio 2; because of the time difference it's Steve Wright in the afternoon. I'm still mourning Terry Wogan's breakfast show.

What makes you laugh?

The late Joan Rivers's caustic commentary on Fashion Police and Seinfeld - no matter how many, many times I've seen it before.

What makes you switch off?

Live American television, all those endless recaps and commercials. I stick with box sets. I just binged on Louie, and now I'm watching Michael Sheen in The Masters of Sex on Showtime.

Do you and your husband Jack Davenport share similar tastes?

Yes, possibly because by 9pm I'm drooling into the sofa and he can watch whatever he wants. My husband and I realised we were soulmates when we took our first trip: we love to pack and unpack. If you have OCD, then our cases are a thing of great beauty.

Crow-speaking Sue in Green Wing, a power-hungry teacher in Bad Education... Why do you often play unhinged characters?

Look at me. I was never going to play an ingenue; not with this nose! Hardly button. I'm a disappointment

I was invited to meet the Queen but I never made it because someone drove a van into Glasgow Airport, which closed down all the Scottish airports, so I couldn't fly. If the palace is reading this, I'm still available. I'm sure Missy and the Queen would get on terribly well.

Doctor Who is on Saturday 8pm, BBC1

2 Strictly or X Factor? Strictly. I think Missy would do a fine turn.

3 The news or HIGNFY?

HIGNFY, as long as Stephen Fry is presiding.

Neither. I get my news from Jon Stewart instead.