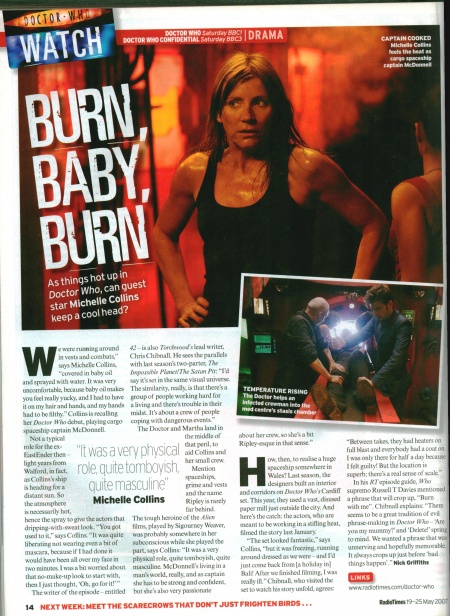 As things hot up in Doctor Who, can guest star Michelle Collins keep a cool

We were running around in vests and combats," says Michelle Collins, "covered in baby oil and sprayed with water. It was very uncomfortable, because baby oil makes you feel really yucky, and I had to have it on my hair and hands, and my hands had to be filthy." Collins is recalling her Doctor Who debut, playing cargo spaceship captain McDonnell.

Not a typical role for the exEastEnder then - light years from Walford, in fact, as Collins's ship is heading for a distant sun. So the atmosphere is necessarily hot, hence the spray to give the actors that dripping-with-sweat look. "You got used to it," says Collins. "It was quite liberating not wearing even a bit of mascara, because if I had done it would have been all over my face in two minutes I was a bit worried about that no-make-up look to start with, then I just thought, 'Oh, go for it!"

The writer of the episode - entitled 42 -is also Torchwood's lead writer, Chris Chibnall. He sees the parallels with last season's two-parter, The Impossible Planet/The Satan Pit: "I'd say it's set in the same visual universe. The similarity, really, is that there's a group of people working hard for a living and there's trouble in their midst. It's about a crew of people coping with dangerous events."

The Doctor and Martha land in the middle of that peril, to aid Collins and her small crew.

Mention spaceships, grime and vests and the name Ripley is rarely far behind. The tough heroine of the Alien films, played by Sigourney Weaver, was probably somewhere in her subconscious while she played the part, says Coffins: "It was a very physical role, quite tomboyish, quite masculine. McDonnell's living in a man's world, really, and as captain she has to be strong and confident, but she's also very passionate about her crew, so she's a bit Ripley-esque in that sense."

How, then, to realise a huge spaceship somewhere in Wales? Last season, the designers built an interior and corridors on Doctor Who's Cardiff set. This year, they used a vast, disused paper mill just outside the city. And here's the catch: the actors, who are meant to be working in a stifling heat, filmed the story last January.

"The set looked fantastic," says Collins, "but it was freezing, running around dressed as we were - and I'd just come back from [a holiday in] Bali! After we finished filming, I was really ill." Chibnall, who visited the set to watch his story unfold, agrees: "Between takes, they had heaters on full blast and everybody had a coat o r. I was only there for half a day because I felt guilty! But the location is superb; there's a real sense of scale...

In his RT episode guide, Who supremo Russell T Davies mentioned a phrase that will crop up, "Burn with me". Chibnall explains: "There seems to be a great tradition of evil phrase-making in Doctor Who 'An you my mummy?' and 'Delete!' spring to mind. We wanted a phrase that was unnerving and hopefully memorable. It always crops up just before 'bad things happen'." Captions