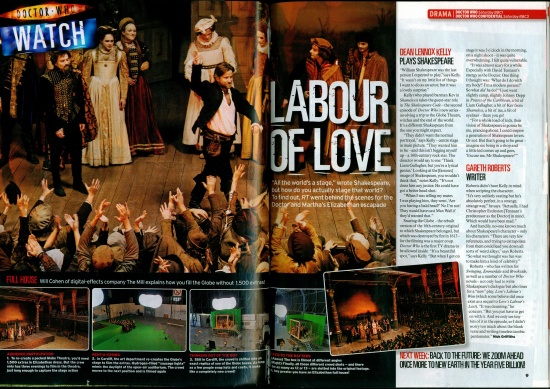 "All the world's a stage," wrote Shakespeare, but how do you actually stage that world? To find out, RT went behind the scenes for the Doctor and Martha's Elizabethan escapade

"William Shakespeare was the last person I expected to play," says Kelly. "It wasn't on my little list of things I want to do as an actor, but it was a lovely surprise."

Kelly (who played barman Key in Shameless) takes the guest-star role in The Shakespeare Code —the second episode of Doctor Who's new series — involving a trip to the Globe Theatre, witches and the end of the world. It's a different Shakespeare from the one you might expect.

"They didn't want the normal portrayal," says Kelly — centre stage in main picture. "They wanted him to be — and this isn't bigging myself up — a 16th-century rock star. The director would say to me: 'Think Liam Gallagher, but you're a lyrical genius.' Looking at the [famous] image of Shakespeare, you wouldn't think that," notes Kelly. "It's not done him any justice. He could have got a better head shot.

"When I was telling my mates I was playing him, they went, 'Are you having a bald head?' No I'm not! They would have cast Max Wall if they'd wanted that."

Snaring the Globe — the rebuilt version of the 16th-century original to which Shakespeare belonged, but which was destroyed by fire in 1613 for the filming was a major coup. Doctor Who is the first TV drama to be allowed inside. "It's a beautiful spot," says Kelly. "But when I got on stage it was 3 o'clock in the morning, on a night shoot — it was quite overwhelming. I felt quite vulnerable.

"It was almost scary for a while. Especially with David Tennant's energy as the Doctor. One thing I thought was: 'What do I do with my body?' I'm a modern person!" So what did he do? "I just went slightly camp, slightly Johnny Depp in Pirates of the Caribbean, a bit of Liam Gallagher, a bit of Key from Shameless, a bit of me, a bit of eyeliner — there you go!

"For a whole load of kids, their vision of Shakespeare is gonna be me, prancing about. I could inspire a generation of Shakespeare lovers. Or not. But that's going to be great — imagine me being in a shop and a little kid comes up and goes, 'Excuse me, Mr Shakespeare!"

Roberts didn't have Kelly in mind when scripting the character. "It's very unlikely casting but he's absolutely perfect, in a strange, strange way," he says. "Actually, I had Christopher Eccleston [Tennant's predecessor as the Doctor] in mind. Which would have been mad."

And handily, no-one knows much about Shakespeare's character — only his characters. "There are very few references, and trying to extrapolate from them could lead you down all sorts of weird alleys," says Roberts. "So what we thought was fun was to make him a kind of celebrity."

Roberts — who has written for Swinging, Emmerdale and Brookside, as well as a number of Doctor Who novels — not only had to write Shakespeare's dialogue but also lines for a "new" play, Love's Labour's Won (which some believe did once exist as a sequel to Love's Labour's Lost). "It was daunting," he concurs. "But you just have to get on with it. And we only see tiny bits of it in the episode, so I didn't worry too much about the blank verse and writing timeless iambic pentameter."

FULL HOUSE Will Cohen of digital-effects company The Mill explains how you fill the Globe without 1,500 extras!

1. To re-create a packed Globe Theatre, you'd need 1,500 extras in Elizabethan dress. But the crew only has three evenings to film in the theatre, just long enough to capture the stage action

2. In Cardiff, the art department re-creates the Globe's stage to film the extras. Hydrogen-filled "sausage lights" mimic the daylight of the open-air auditorium. The crowd moves to the next position and is filmed again

Thinking outside the box

3. Still in Cardiff, the crowd is shifted into an exact replica of one of the Globe boxes. As long as a few people swap hats and coats, it looks like a completely new crowd!

Packed to the rafters

4. (Above) The box is filmed at different angles. (Right) Finally, all those different crowd shows--and there may be as many as 12 or 13-- are slotted into the original footage. And, hey presto: you have an Elizabethan full house!