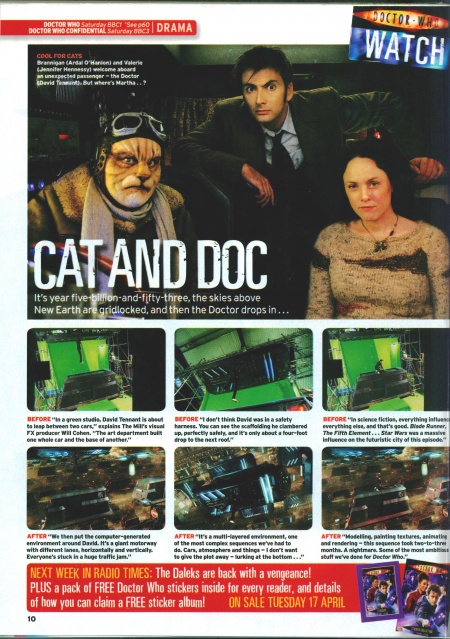 It's year five-billion-and-fifty-three, the skies above New Earth are gridlocked, and then the Doctor drops in ...

BEFORE "In a green studio, David Tennant is about to leap between two cars," explains The Mill's visual FX producer Will Cohen. "The art department built one whole car and the base of another."

AFTER "We then put the computer-generated environment around David. It's a giant motorway with different lanes, horizontally and vertically. Everyone's stuck in a huge traffic jam."

BEFORE "I don't think David was in a safety harness. You can see the scaffolding he clambered up, perfectly safely, and it's only about a four-foot drop to the next roof."

AFTER "It's a multi-layered environment, one of the most complex sequences we've had to do. Cars, atmosphere and things - I don't want to give the plot away - lurking at the bottom ...

BEFORE "In science fiction, everything influences everything else, and that's good. Blade Runner, The Fifth Element ... Star Wars was a massive influence on the futuristic city of this episode."

AFTER "Modelling, painting textures, animating and rendering - this sequence took two-to-three months. A nightmare. Some of the most ambitious stuff we've done for Doctor Who."