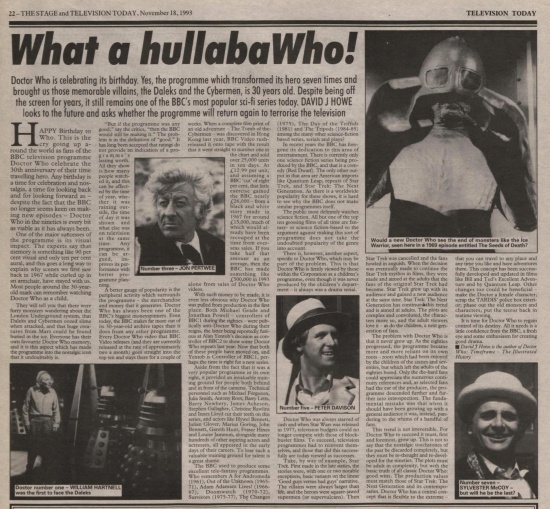 Doctor Who is celebrating its birthday. Yes, the programme which transformed its hero seven times and brought us those memorable villains, the Daleks and the Cybermen, is 30 years old. Despite being off the screen for years, it still remains one of the BBC's most popular sci-fi series today. DAVID J HOWE looks to the future and asks whether the programme will return again to terrorise the television

HAPPY Birthday to Who. This is the cry going up around the world as fans of the BBC television programme Doctor Who celebrate the 30th anniversary of their time travelling hero. Any birthday is a time for celebration and nostalgia, a time for looking back and for looking forward as - despite the fact that the BBC no longer seems keen on making new episodes - Doctor Who in the nineties is every bit as viable as it has always been.

One of the major successes of the programme is its visual impact. The experts say that memory is something like 90 per cent visual and only ten per cent aural, and this goes a long way to explain why scenes we first saw back in 1967 while curled up in an armchair, have stayed with us. Most people around the 30-yearold mark can remember watching Doctor Who as a child.

They will tell you that there were furry monsters wandering about the London Underground system, that Daleks and Cybermen oozed slime when attacked, and that huge creatures from Mars could be found buried in the ice. Everyone has their own favourite Doctor Who memory, and it is this aspect which has made the programme into the nostalgic icon that it undoubtably is.

"But if the programme was any good," say the critics, "then the BBC would still be making it." The problem is in the definition of "good." It has long been accepted that ratings do not provide an indication of a programme's lasting worth. All they show is how many people watched it, and this can be affected by the time of year, whether it was raining outside, the time of day it was shown and what else was on television at the same time. Any programme, it can be argued, improves its performance with better programme planning.

A better gauge of popularity is the peripheral activity which surrounds the programme - the merchandise and money that it generates. Doctor Who has always been one of the BBC's biggest moneyspinners. Even today, the BBC makes far more out of its 30-year-old archive tapes than it does from any other programme. Every Doctor Who video that BBC Video releases (and they are currently released at the rate of approximately two a month) goes straight into the top ten and stays there for a couple of weeks. When a complete film print of an old adventure - The Tomb of the. Cybermen - was discovered in Hong Kong last year, BBC Video rush-released it onto tape with the result that it went straight to number one in the chart and sold over 25,000 units in ten days. At £ 12.99 per unit, and assuming a BBC 'cut' of eight per cent, that little exercise gained the BBC nearly £26,000 - from a black and white story made in 1967 for around £ 15,000, much of which would already have been recouped at the time from overseas sales. If you take half that amount as an average, then the BBC has made something like £500,000 in 1993 alone from sales of Doctor Who videos.

With such money to be made, it is even less obvious why Doctor Who was pulled from production in the first place. Both Michael Grade and Jonathan Powell - controllers of BBC 1 during the eighties were publically anti-Doctor Who during their reigns, the latter being reportedly furious at Alan Yentob's decision as controller of BBC2 to show some Doctor Who repeats last year. Now that both of these people have moved on, and Yentob is Controller of BBC I , perhaps the time is right for a new series.

Aside from the fact that it was a very popular programme in its own right, it provided an invaluable training ground for people both behind and in front of the cameras. Technical personnel such as Michael Ferguson, Julia Smith, Antony Root, Barry Letts, Barry Newbery, James Acheson, Stephen Gallagher, Christine Rawlins and Inns Lloyd cut their teeth on this series, and actors like Hywe1 Bennett, Julian Glover, Marius Goring, John Bennett, Gareth Hunt, Fraser Hines and Louise Jameson, alongside many hundreds of other aspiring actors and actresses, all appeared in the early days of their careers. To lose such a valuable training ground for talent is a great shame.

In recent years the BBC has foregone its dedication to this area of entertainment. There is currently only one science fiction series being produced by the BBC, and that is a comedy (Red Dwarf). The only other output in that area arc American imports like Quantum Leap, repeats of Star Trek, and Star Trek: The Next Generation. As there is a worldwide popularity for these shows, it is hard to see why the BBC does not make similar programmes itself.

The public most definitely watches science fiction. All but one of the top ten grossing films of all time are fantasy or science fiction-based so the argument against making this sort of programme does not take the undoubted popularity of the genre into account.

There is, however, another aspect, specific to Doctor Who, which may be part of the problem. This is that Doctor Who is firmly viewed by those within the Corporation as a children's programme, even though it was never produced by the children's department - it always was a drama serial.

Doctor Who was always starved of cash and when Star Wars was released in 1977, television budgets could no longer compete with those of blockbuster films. To succeed, television programmes had to reinvent themselves, and those that did this successfully are today viewed as successes.

Take, by way of example, Star Trek. First made in the late sixties, the stories were, with one or two notable exceptions, basic variants on the linear 'Good guys versus bad guys' narrative. The villains were always larger than life, and the heroes were square-jawed supermen (or supervulcans). Then

Star Trek was cancelled and the fans howled in anguish. When the decision was eventually made to continue the Star Trek mythos in films, they were made and aimed at the adults that the fans of the original Star Trek had become. Star Trek grew up with its audience and gained a new audience at the same time. Star Trek: The Next Generation has continued,this trend and is aimed at adults. The plots are complex and convoluted, the characters more so, and the adult viewers love it -- as do the children, a next generation of fans.

The problem with Doctor Who is that it never grew up. As the eighties progressed, the programme became more and more reliant on its own roots - roots which had been enjoyed by the children of the sixties and seventies, but which left the adults of the eighties bored. Only the die-hard fans could appreciate the numerous continuity references and, as selected fans had the ear of the producer, the programme descended further and further into introspection. The fundamental mistake was that when it should have been growing up with a general audience it was, instead, pandering to the whims of a handful of fans.

This trend is not irreversible. For Doctor Who to succeed it must, first and foremost, grow up. This is not to say that the nostalgic touchstones of the past be discarded completely, but they must be re-thought and re-developed for the nineties. The plots must be adult in complexity, but with the basic truth of all classic Doctor Who: good wins. The production values must match those of Star Trek: The Next Generation and its contemporaries. Doctor Who has a central concept that is flexible to the extreme -- that you can travel to any place and any time you like and have adventures there. "This concept has been successfully developed and updated in films like Bill and Ted's Excellent Adventure and by Quantum Leap. Other changes too could be beneficial make the Doctor a female character; scrap the TARDIS' police box exterior; phase out the old monsters and characters; put the terror back in teatime viewing.

It is time for Doctor Who to regain control of its destiny. All it needs is a little confidence from the BBC, a fresh eye and some enthusiasm for creating good drama.

David J Howe is the author of Doctor Who: Timeframe -- The Illustrated History

Number seven - SYLVESTER McCOY - but will he be the last?

Would a new Doctor Who see the end of monsters like the Ice Warrior, seen here in a 1969 episode entitled The Seeds of Death?