Good and bad times with the Time Lord 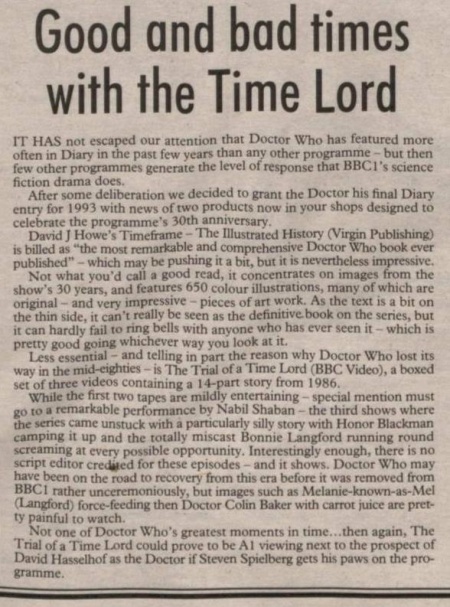 IT HAS not escaped our attention that Doctor Who has featured more often in Diary in the past few years than any other programme -- but then few other programmes generate the level of response that BBC1's science fiction drama does.

After some deliberation we decided to grant the Doctor his final Diary entry for 1993 with news of two products now in your shops designed to celebrate the programme's 30th anniversary.

David J Howe's Timeframe - The Illustrated History (Virgin Publishing) is billed as "the most remarkable and comprehensive Doctor Who book ever published" - which may be pushing it a bit, but it is nevertheless impressive.

Not what you'd call a good read, it concentrates on images from the show's 30 years, and features 650 colour illustrations, many of which are original - and very impressive pieces of art work. As the text is a bit on the thin side, it can't really be seen as the definitive-book on the series, but it can hardly fail to ring bells with anyone who has ever seen it - which is pretty good going whichever way you look at it.

Less essential - and telling in part the reason why Doctor Who lost its way in the mid-eighties - is The Trial of a Time Lord (BBC Video), a boxed set of three videos containing a 14-part story from 1986.

While the first two tapes are mildly entertaining - special mention must go to a remarkable performance by Nabil Shaban - the third shows where the series came unstuck with a particularly silly story with Honor Blackman camping it up and the totally miscast Bonnie Langford running round screaming at every possible opportunity. Interestingly enough, there is no script editor creed for these episodes - and it shows. Doctor Who may have been on the road to recovery from this era before it was removed from BBC! rather unceremoniously, but images such as Melanie-known-as-Mel (Langford) force-feeding then Doctor Colin Baker with carrot juice are pretty painful to watch.

Not one of Doctor Who's greatest moments in time...then again, The Trial of a Time Lord could prove to be A 1 viewing next to the prospect of David Hasselhof as the Doctor if Steven Spielberg gets his paws on the programme.